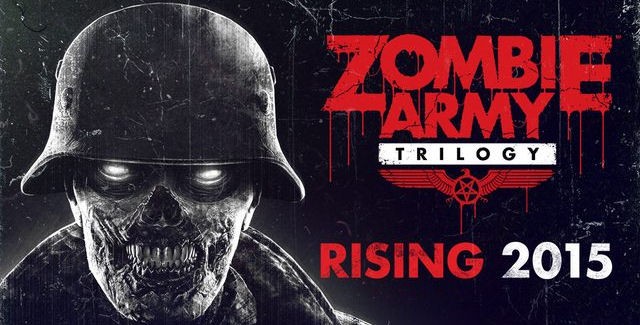 Our Zombie Army Trilogy walkthrough will guide you through the beginning to ending moments of gameplay with strategy tips for this tactical shooter survival-horror game on the PS3, PS4, Xbox 360, Xbox One & PC that includes the Sniper Elite: Nazi Zombie Army 1, 2 & 3 walkthrough.

Zombie Army Trilogy is a terrifyingly intense third person shooter set in a gruesome alternate vision of World War II. Berlin 1945. Facing defeat at the hands of the Allies, Hitler has unleashed one last unholy gamble – a legion of undead super soldiers that threatens to overwhelm the whole of Europe. Fight alone or team up to save humanity from the zombie menace in this apocalyptic shooter for 1-4 players!

The cult horror shooter series comes to an apocalyptic conclusion with an epic new third chapter, a heart-pumping new horde mode, and remastered editions of the best-selling Nazi Zombie Army 1 & 2.

In the dying flames of World War II, Hitler has unleashed one final, unholy gamble – a legion of undead super soldiers that threatens to overwhelm the whole of Europe. Fight alone or team up to save humanity from the zombie menace in this apocalyptic third-person shooter!

Battle through THREE epic campaigns across 15 demon-infested missions. Play solo or fight back to back in online co-op for 2-4 players. Dare you take on one of the most intense and challenging third-person shooters in gaming?

Face gruesome enemies with iconic weaponry and powerful explosives. Dismember the undead to give yourself a fighting chance, and experience every putrid lung burst, every rotten bone shatter with the infamous X-ray Kill Camera.

The ultimate horror package – alone or with teammates:
• Experience THREE nerve-shredding campaigns across FIFTEEN missions of intense third-person action.
• Take the fight to the undead alone, or team up in 2-4 player online co-op.
• Face your fears in the brutal new Horde Mode for 1-4 players, across 5 blood-curdling maps.

Gut-wrenching gunplay:
• Defeat harrowing legions of zombies, armored skeletons, fire demons, chainsaw-wielding elites – and worse – before facing the demonic Führer himself!
• Shred the undead with genre-best rifle ballistics, powerful firearms and deadly explosive traps.
• Wince as your bullets shred the insides of the undead in gruesome detail with the return of the series’ acclaimed X-ray Kill Camera.

Customize your carnage:
• Choose to play as one of FOUR male or FOUR new female survivors.
• Perfect your play style with CUSTOMIZABLE weapons and loadouts.
• Customize your DIFFICULTY and add enemy multipliers. Surely you would never brave “X4” on Sniper Elite difficulty … or would you?

Recut. Remastered. Unleashed:
• Includes the first two Nazi Zombie Army games like you’ve never seen them before.
• Pick apart zombies with the new DISMEMBERMENT mechanic and bathe in a bloody glow of NEW graphical effects, NEW audio, NEW enemy animations … and more.
• Play your favorite missions from ANY campaign in ANY order in ONE unified online community.

• Gewehr 43
This German rifle has the highest rate of fire available. Its semi-automatic action is complimented by having the highest zoom level, though a low muzzle velocity means wind and gravity effects are amplified.

• Karabiner 98k
The German Kar 98 has the highest zoom of any of the available rifles. A lower muzzle velocity requires some compensation from the user at long distances, and the bolt action mechanism slows the rate of fire.

• Lee Enfield Mk.III
The main rifle of the British armed forces. Holds 10 rounds but a lower muzzle velocity means additional compensation should be made for wind and gravity.

• M1 Carbine
Widely used throughout the US military, the M1 Carbine has an improved rate of fire and holds 15 rounds. High recoil and a lower level of zoom are its weaknesses.

• M1D Garand
A variant of the standard US Garand rifle, the M1D features an 8 round semi-automatic clip feed system. Has a reduced muzzle velocity relative to its stablemate, the Springfield.

• SVT-40
A popular semi-automatic rifle on the Eastern front, the Russian SVT40 boasts a 10 round clip and a high rate of fire. However, limited zoom and high recoil can limit its effectiveness at longer ranges.

• Type 99
The bolt action Japanese Type 99 sports only 5 rounds per clip, but features a high muzzle velocity and a high level of zoom.

• Preacher
A large double-barrelled rifle. Capable of punching a hole through pretty much anyone and anything, however this power is offset by the lack of a scope and a limit of two rounds chambered at any one time.

• Blyskawica
With a high damage output and considerably lower accuracy at range, the Polish Blyskawica is a great close combat weapon.

• MP 40
The German MP40 lacks the accuracy of the Thomson, however it makes up for this with a higher rate of fire and more plentiful ammunition when behind enemy lines.

• MP 44
High rate of fire and further effective range make the MP44 superior to the MP40. However, slightly less damage output should be a consideration.

• PPSh 41
The Russian PPSh has a vastly higher rate of fire compared to the other available sub machine guns. The recoil from this, however, can cause it to be less accurate and more difficult to control.

• Thompson M1
This American made sub machine gun grants superior accuracy and damage, however ammunition is scarce and it suffers from a slower rate of fire.

• M1911
This American pistol deals a lot of damage with its powerful .45 cal bullets. However, these are hard to come by in the field, and it has a slightly lower firing rate than the Luger.

• Luger P08
The high rate of fire of the German Luger is offset by the lower damage it can deal.

• Tokarev TT-33
A stalwart of the Red army, the Tokarev TT-33 deals slightly less damage than most sidearms but boasts an 8 round clip and improved accuracy.

• Webley Mk.VI
A classic British revolver. High power coupled with a lower rate of fire give this 6 shooter a very distinctive feel.

• Land Mine
A useful anti infantry device. However, it has a small area of activation so positioning is important.

• Dynamite
A dynamite charge which creates a devastating explosion and is remotely detonated by sniping. It can be used for taking out large numbers of zombies simultaneously. You can throw dynamite as you would a grenade, then detonate it with a rifle shot.

• Trip Mine
Positioned between two points, it’s a perfect trap to stop enemies from flanking your position.

Evil has taken over Germany. Fight for your life and save the world from Oblivion.

“Episode 3: Beyond Berlin” Synopsis: Hitler’s undead troops gather in unprecedented numbers. The few survivors of this apocalypse have little hope. With sniper rifles in hand, a select brave few dare to take the fight to the leader of the Zombie Army… Hitler himself.

“Chapter 1: City of Ashes” Intro: Operation Red Harvest reduced much of Berlin to ash. But legions of Nazi Zombies still gather in the bomb-blasted ruins of the city. However, there ARE survivors, trying to reclaim what remains of civilization. They look to you for salvation. Do not let them down!

Doug will be your voice-over commentator guiding you through the game’s first 34-minute-long chapter.

Tip: Occult Seals will sometimes block progress. Defeat nearby enemies to remove them.

“Chapter 2: City of Ashes” Intro: You know that Hitler is rallying his Nazi Zombie horde somewhere beyond the irradiated zone. Get to his location and find a way to stop him… permanently.

The NGTZombies team continues the campaign in 3-player Co-Op mode.

Tip: Shoot placed dynamite to detonate it. Dynamite can be thrown and then shot to take out large crowds of enemies.

“Chapter 3: Forest of Corpses” Intro: Hitler’s strength stems from an ancient vault, sealed by a key kept in his mountain fortress, the Folterschloss. To recover it, you must first traverse the ominous forest at the mountain’s base, a forest mired in legends of the Impaler…

[WORK-IN-PROGRESS: More chapters coming as soon as they are available]

In the meantime, see how much fun Mike & Andy are having playing the co-op! This game really shines with a buddy. 😀

Thanks to Rebellion, Doug, NGTZombies & Outsidexbox for the walkthrough videos.