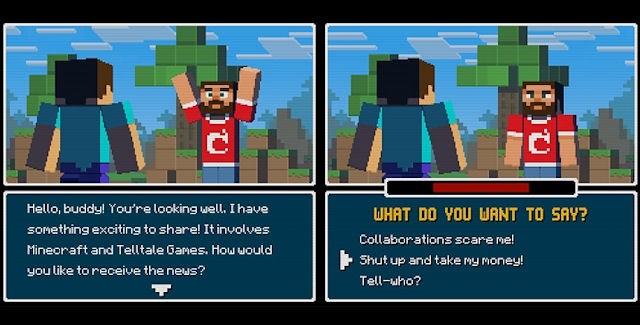 Telltale Games and Mojang have announced a partnership to create an interactive episodic game series based on the Minecraft universe, with a confirmed Minecraft: Story Mode release date set for October 13th, 2015! That’s when you can expect the first episode of the game series, which is in line with the end-year Q4 debuts of other Telltale episodic series.

To quote the creators talking about the upcoming release: “It will not be an add-on for Minecraft, but rather a separate stand-alone product that will premiere in 2015 on consoles (PS4, PS3, PS Vita, Xbox One, Xbox 360, Wii U), computers (PC, Mac) and mobile devices (Apple iOS, Android).”

Minecraft: Story Mode will be an all-new narrative-driven game series developed by Telltale in collaboration with Mojang. Set in the world of Minecraft, the series will feature an original story, driven by player choice.

Telltale’s game series will mix new characters with familiar themes, in an entirely original Minecraft experience, inspired by the Minecraft community and the game that continues to inspire a generation.

Important Fact: This is why Minecraft: Story Mode is called a stand-alone game, separate from the main Minecraft game millions of fans the world over know and love.

Here’s the Minecraft: Story Mode teaser (no trailer yet):

• Minecraft: Story mode will be a narrative-driven video game created by Telltale Games. It will be about Minecraft.
• Mojang is collaborating with Telltale and members of the community to make Minecraft: Story Mode as Minecrafty as possible.
• The first episode will be released some time in 2015, and will be available on Xbox consoles, PlayStation consoles, PC, Mac, iOS, and Android-based devices.
• Minecraft: Story Mode will be released episodically, just like The Wolf Among Us, The Walking Dead, or the recent Tales from the Borderlands, which is another developer-collaboration series between Telltale Games and Gearbox Software.
• We’re not intending on creating an “official” story for Steve, or explaining the world of Minecraft in detail. It will be a cool game.
• The Minecraft 2 thing was a joke. No really. It was a joke.

All this info seems to tell us it will be a family-friendly Telltale game that you can even play with the young ones.

For more information on why Telltale and Mojang chose to work together, Mojang has made a funny “Info Quest II” flash game on their Mojang Blog here.

To quote the developers at Telltale Games about the 2014 game announcement:

“2014 is Telltale’s tenth anniversary year; seeing in the climactic finales of the critically acclaimed and best-selling The Wolf Among Us and The Walking Dead: Season Two. With the recent premieres of both Game of Thrones and Tales from the Borderlands, our 2015 lineup will include the remainder of both of those new series, and now it will also include the premiere of Minecraft: Story Mode.

After ten years of making games, Telltale is JUST getting started! We would like to thank all of our incredible fans across the world, as we continue to forge ahead in creating adventures where the most important author of each story is YOU. We’ll have more in the months ahead, but for now, we thank you again, and wish you a safe and happy holiday and a prosperous New Year!”

Working on Story Mode at the Telltale headquarters #minecraft

Still in San Rafael, working on Story Mode with Telltale and the team. Fun times! Heading back to Stockholm tomorrow evening.

At SFO with @bopogamel waiting for the flight that will bring us back home. It has been a good couple of days at Telltale

What do you think Telltale’s Minecraft: Story Mode Game will be about?
Watch this by Nika self-made Minecraft story video for ideas:

Update September 16: Release dates for all platforms have been officially confirmed. To quote…

“Episode 1: ‘The Order of the Stone,’ the first of five episodes in the season, will premiere digitally worldwide on Tuesday, October 13th this year. The episode will be available at launch on PC and Mac from the Telltale Online Store, Steam, and other digital distribution services, on the PlayStation Network for PlayStation 4 and PlayStation 3, and on the Xbox Games Store for Xbox One and Xbox 360. The season premiere will be available for compatible iOS devices via the App Store and for compatible Android-based devices via Google Play and the Amazon Appstore starting Thursday, October 15th. The series will also be coming to Wii U and PlayStation Vita – stay tuned for more details on those platforms!

As per usual, we’re keeping plenty of exciting details under wraps so you can have the fun of discovering them for yourself. We can give you a LITTLE taste of what to expect though.

We’ve been working closely with the people at Mojang to ensure that Minecraft: Story Mode absolutely feels like a part of the world that Minecraft players already know and love, with a cinematic story and trademark Telltale choice-based gameplay. We know how important customization is to the creative minds who play Minecraft, so we’ve paid special attention to implementing that in Minecraft: Story Mode too. This is the first Telltale game where YOU get to choose the appearance of the player character. Not only do you get to play as either a male or female version of Jesse, you’ll also be able to select from 3 different looks for each.

We’ve also managed to snag some seriously all-star voice talent for the season. Male Jesse is portrayed by Patton Oswalt (you might recognize his voice from Ratatouille and Agents of S.H.I.E.L.D), while female Jesse is voiced by Catherine Taber (she’s been in Star Wars: The Clone Wars and Marvel Heroes). The season will also feature Brian Posehn, Ashley Johnson, Scott Porter, Martha Plimpton, Dave Fennoy, Corey Feldman, Billy West, and Paul Reubens – and there are still more cast details to come! We couldn’t possibly be more excited to be working with such an amazing group of actors.”

Are you excited to get Minecraft: Story Mode ASAP on its release date?