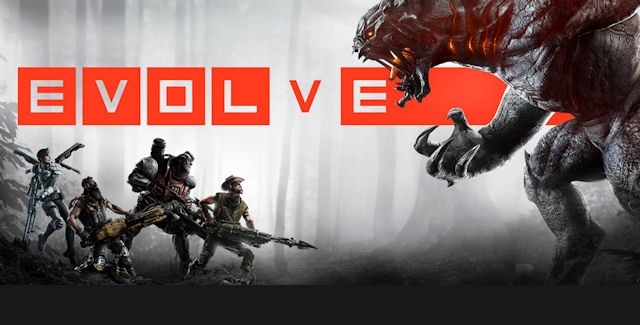 Once available, we will show you how to unlock all Evolve codes with a cheats list that’s valid for the PC, PS4 & Xbox One versions.

Shear is an unforgiving planet and in order to survive, you must be prepared. Everything you need to know about Evolve, the next generation 4v1 shooter, can be found in this survival guide. Hunt together or kill alone. It’s survival of the fittest and any side can win.

Deciding when to stay and when to go is pivotal to Evolve. Learn tips straight from Turtle Rock Studios in this video guide.

The key to a Monsters success is through his stomach. Learn tips straight from Turtle Rock Studios in this series.

Good communication is key in Evolve and there are several ways to be heard. Get some tips and tricks on this from the creators.

Good communication is key in Evolve and there are several ways to be heard. Check out this new video guide.

Nowadays DLC seems to be replacing character unlock and other cheats, but at least Evolve’s future new maps will be free for all. So that makes all these pre-order/digital bonuses easier of a bitter pill to swallow.

Note: Since the below overview is a big confusion, I’ll just sum it up by saying that to get all the extra monsters & hunters the cheapest, you’ll need to pre-order the game & buy the Monster Expansion Pack & Season Pass.

• The Monster Expansion Pack including Fourth Playable Monster — gives you two things: At launch, you get an exclusive Savage Goliath skin. After the game ships, you get the fourth Monster (Behemoth). That is a retail value of more than $15 and adds a whole different gameplay mechanic to how you’ll fight. If you pre-order, you get this FREE when the fourth Monster is done.

• Fifth Playable Monster — Goliath, Kraken, Wraith and Behemoth are not alone. A fifth playable Monster is coming to Shear and included in the PC Monster Race Edition, Digital Deluxe Edition, and Monster Expansion Pack (often a pre-order bonus itself). You get Behemoth for free in the Monster Expansion Pack by pre-ordering Evolve, or purchase him separately for $15 when he becomes available as downloadable content in Spring 2015.

• The Evolve Hunting Season Pass — contains four new Hunter characters (one from each class), as well as three new Monster skins (Magma Goliath, Magma Kraken and Magma Wraith.) and will only cost you $24.99. Considering that if you bought them all separately, all of that content will run you about 30 bones, stash that extra $5 in your pocket as a thank you for joining us on the hunt.
The Monster skins will be available on launch day and the upcoming Hunters will be available as released.

• The Evolve Digital Deluxe Edition — which features $95 worth of content for $80. That’s the full game, the Monster Expansion Pack, as well as the aforementioned Hunting Season Pass.

There are no Evolve cheats on Xbox One, PS4 & PC yet. So until they are discovered, we made the handy Evolve guides listed above to help you with tips and tricks for the game!

Do you know of any Evolve cheats or unlockables?
Let us know in the comments, you’ll get credit for finding out. – Thanks for visiting!