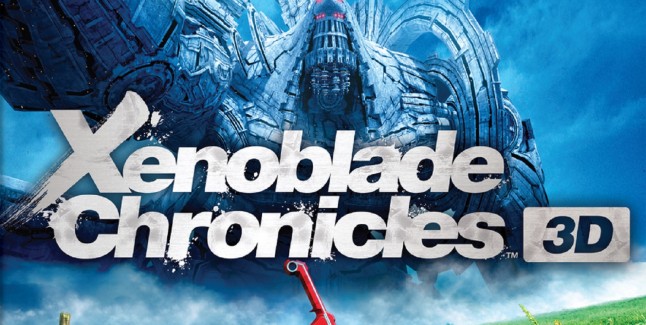 The Xenoblade Chronicles 3D release date has been announced for April 2nd, 2015, and is the first game to be exclusively compatible with the “New 3DS XL” hardware that launches in February 2015, a more powerful & upgraded version of the 3DS line of systems.

Check out this gameplay trailer for Xenoblade Chronicles 3D for New 3DS.

That means that if you own a 3DS, 3DS XL or 2DS, you will not be able to play Xenoblade Chronicles 3D until you upgrade to a “New 3DS XL” (you can easily tell which system you have, as the New 3DS XL has FOUR shoulder buttons instead of two).

Xenoblade Chronicles 3D is an upgraded version of the critically acclaimed Wii RPG, Xenoblade Chronicles (2012) from Monolith Soft, that a lot of gamers missed out on. This version is being developed by Machine Games, the same developer who brought us Donkey Kong Country Returns 3D, a 3DS upgrade to the Wii’s Donkey Kong Country Returns game (2010).

This is because Monolith Soft is hard at work on the sequel, Xenoblade Chronicles X, for Wii U.

Xenoblade Chronicles 3D doesn’t contain a lot of improvements over the Wii version, but it will allow you to see the map & character stats on the bottom screen, for clutter-free world exploration on the top screen; and it will make use of the touchscreen for easier menu navigation.

One all-new extra is an included Bestiary of sorts where you can view 3D models of all of the game’s enemies.

No word on whether or not the game contains any additional upgrades beyond those.

Here’s some hands on video of Xenoblade Chronicles 3D for 3DS.

Synopsis:
An epic clash between man and machine Available exclusively for the Wii system, the Xenoblade Chronicles game combines science fiction and fantasy into an unforgettable open-world adventure. Players will discover expansive environments and deep character customization options as they delve into an epic conflict between the Homs (humans) and Mechons (robots) and uncover the secret of the ancient Monado blade. With richly detailed role-playing elements, Xenoblade Chronicles offers an extraordinary experience for veteran gamers and genre newcomers alike.

* Xenoblade Chronicles invites players to explore a truly vast open-world universe. In addition to the game’s main quest, they can also take on side quests, seek out special items and uncover hidden areas.

* Players can customize their characters by choosing from a wide array of weapons, armor, equipment and accessories. Each item not only enhances characters’ abilities, but also affects the appearance of different characters in distinctive ways.

* A unique upgrade system lets players improve their characters’ performance throughout the game. They can earn upgrades during battle, trade with townspeople or collect and purchase items. Players can also use magical gems in enhance the abilities of their existing equipment.

* The game also incorporates a unique relationship-building system called Affinity. Different characters will have distinct Affinity levels in relation to one another, which can influence their interactions and affect their progress through the game.

I’m super happy that Nintendo is choosing to re-release this game to give gamers who missed this great RPG last-gen another crack at it.

It is one of those games that deserves to be played; especially after all the petitions urging Nintendo to bring it over.

I hope that Nintendo or some other developer sees fit to port over the criminally underlooked fellow “Operation Rainfall” campaign RPGs: Pandora’s Tower & The Last Story; both of which deserve to be played by 3DS owners equally as much.

However it’s sad to know that this game cannot be played on old 3DS hardware… it can only be played on the “New 3DS XL” systems (launching in February) which will extremely, extremely limit the audience that can play it. FOR SHAME!

Are you planning on purchasing Xenoblade Chronicles 3DS? Did you play the original Wii game?