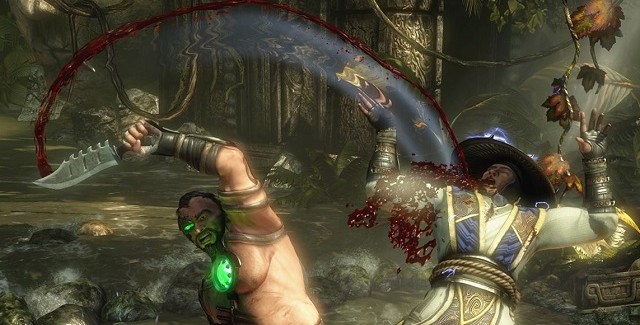 Mortal Kombat X has gotten new roster updates with Reptile & Kitana added to the list of playable fighters. This brings the total MK X roster to thirteen so far!

Check out the newest reveal trailer for Reptile!

Mortal Kombat X will hit store shelves & digital platforms on April 14, 2015 for both next-gen & last-gen consoles, as well as PC; so that includes PlayStation 4, Xbox One, Xbox 360, PlayStation 3 & PC. While NetherRealm is handling the next-gen & PC platforms, last-gen platform ports will be outsourced and the last-gen versions certainly won’t be up to snuff. Either way it’s good to have the option for gamers who haven’t upgraded.

Now for a barrage of Mortal Kombat X goodness.

Pronounced Mortal Kombat Ex (not “ten”… although I’ll still call it that, proper pronunciation be darned), this is the tenth installment in the long-running (the sequel to “Mortal Kombat 9“, or as we call it, “Mortal Kombat 2011“), brutal fighting game series, and part ten promises to be the most brutal & horrifically violent game yet in the franchise.

To start, check out a full 30 minutes of Mortal Kombat X gameplay!

Next up, you gotta see the debut trailer for Mortal Kombat X if you missed it.

It features Scorpion & Subzero fighting with in-engine rendered graphics, set to an original rap track by Wiz Khalifa titled “Can’t Be Stopped”; And also highlights the game’s catchphrase, “Who’s Next?”, in the lyrics of the song.

Now let’s get to know some of the game’s characters that have been revealed with trailers so far.

First check out this amazing Raiden trailer with commentary by Mortal Kombat co-creator & series producer since the beginning, Ed Boon (who created MK along with John Tobias, their two names formed the basis of the character Noob Saibot).

This trailer reveals how the new Fighting System works, with the ability to switch between Variations of the same character that completely changes how that character is played, including their Move Set.

Displacer can teleport & perform teleportation moves that make him hard to hit, Thunder God is essentially what you know & love, and Storm Lord can leave behind and CONNECT electrical fields that allow him to control the flow of battle in unprecedented ways. CRAZY!

Next up is: Quan Chi.

“Narrated by Shaun Himmerick, executive producer at NetherRealm Studios, the new video showcases Quan Chi’s return in Mortal Kombat X, as he utilizes powerful magic and expert cunning to destroy all who stand in his way. Witness him casting spells on opponents with his Sorcerer variation, open dark portals with the Warlock variation and conjure a beast from the NetherRealm to fight by his side with his Summoner variation.”

“Kano, leader of the international crime syndicate The Black Dragon, goes up against new-to-the-series character D’Vorah.

I do sometimes wish they’d go with a less choppy animation-style, but it’s almost downright iconic at this point. All of the Eastern fighting games, from Tekken to Dead or Alive to SoulCalibur use the smooth animation technique, so let’s give MK some credit for doing it the meat-and-potatoes American-style!

Either way, I am totally digging this game and it looks incredible. I love what they’ve done with the variation system and bringing back so many classic characters, plus adding in lots of new fighters. They have another HUGE hit on their hands with this one!

How excited are you for Mortal Kombat X?