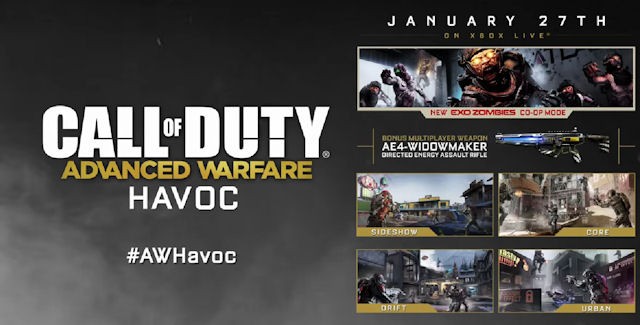 Please note that viewers must be at least 18 to watch, so no harm comes to those with innocent eyes. This game includes Blood and Gore, Drug Reference, Intense Violence, Strong Language.

Important: Season Pass owners should NOT buy Havoc separately, and instead download it in-game.

Welcome to the Call of Duty: Advanced Warfare Havoc walkthrough! Ali-A will be your voice-over commentator showing you around the game’s maps.

Set amidst the remains of a destroyed nuclear fusion plant in the Gobi desert, Core features a traditional three-lane layout and a central rallying point where players can come to blows in close-quarters combat.

A new map-based scorestreak will unleash a series of autonomous decontamination drones that seek out and neutralize enemies.

Those who like fast, frenetic firefights will want to check out Urban, which throws teams and players into Dallas Ward 3—a futuristic mega structure with tight corridors ideal for close-range weapons.

Pathways shift as the structure goes into lockdown, opening new strategic routes and keeping bunkered enemies on their toes.

Long-range players are likely to favor Sideshow, offering a more open exterior environment with plenty of elevated vantages and rooftops. A clown-themed inn near Devil’s Tower in Wyoming acts as an eerie backdrop, complete with circus-style decor.

During a match, a giant neon clown on the inn’s marquee will lift his hat and scatters bombs around the map, which players can pick up and throw.

Rounding off the new lineup of maps is Drift, a snow-covered ski resort in the Rocky Mountains ideal for both long-range and close-quarters play. Lock down a rotating carousel at the center of the map to deflect enemies coming through several of the map’s pathways or take up one of several overwatch positions to get the jump on your enemies.

Don’t linger for too long though, as half-way through the match an avalanche map event can suddenly occur.

Building upon the in-game Easter egg players uncovered in Advanced Warfare’s Exo Survival mode, Havoc will mark the debut of a new take on the Call of Duty zombies experience — Exo Zombies. With its own unique story and challenging new encounters, players will band together and take the roles of four Atlas employees to battle mutant hordes infected by a DNA bioweapon.

Although players will be able to leverage Advanced Warfare’s exoskeleton and futuristic arsenal to survive, including the new CEL-3 Cauterizer energy shotgun, their mutant enemies will also be well-equipped, using rapid boost jumps and lunges to attack.

Protip: Check out our 100% complete “Call of Duty: Advanced Warfare Havoc Outbreak Guide” that explains all the steps needed to finish the puzzles / challenges and find all secrets! 🙂

Thanks to Activision, Ali-A & Noah for the walkthrough videos.