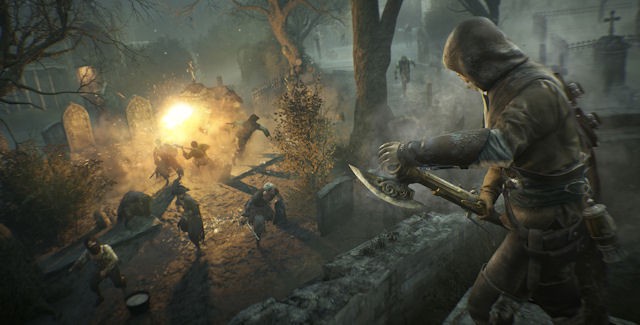 The Assassin’s Creed Unity: Dead Kings trophies guide lists every trophy for this PS4 action-adventure game’s story DLC and tells you how to get and unlock them.

In the Assassin’s Creed Unity: Dead Kings trophy guide we’ll show there are 7 Trophies (1 Hidden) that can be earned in the PS4 version. Earn Bronze (5), Silver (1), and Gold (1) Trophies to increase your Gamer Level.

Important Note: Many players have reported several Trophies not unlocking after completion. Other cases say the unlocked DLC weapons cannot be equipped.
– Trophies Fix: If it’s “Defender of Franciade” or “Hydrogen Bonded” Trophy that’s not unlocking, then it’s recommended you Uninstall the “Assassin’s Creed Unity Revolutionary Armaments Pack” from your system’s harddrive. Then start up the game and once in the game world they will unlock, then you can re-download the pack again.
– Weapons Fix: To Equip the Eagle Of Suger “One-Handed” sword after you’ve unlocked it; The Equip button won’t appear on-screen when you’re in the Weapon / Gear Loadout menu. It’s done by pausing the game and going to the “Rifles” weapons section and equip The Iron Dragon rifle, then go to the “Pistols” section and equip any one like the Gold-Plated Pistol. Then exit out of the pause menu back into the game, then suddenly the Eagle of Suger appears in your hands.
I figure I should add this news to let you know you’re not alone with any issues. All we can do is hope Ubisoft will release a game update soon that will permanently fix these issues.

1. Defender Of Franciade (Bronze) — Complete Suger’s Legacy and recover the Eagle of Suger.

After solving all 7 Sugers Legacy puzzles and unlocking the Eagle of Sugar (picking it up will be your next Objective), the trophy should pop up. The 2 puzzles not listed below always get done as part of story missions, they are called the “III – Diabolus” & “V – Crux” riddles.

Tip: The outposts will appear on your map as barn house icons after completing the “Memory 2: The Book Thief” mission. Franciade has 3 outposts for you to free, which is done by killing each outpost’s 3 leaders. Like the game says: “To free the Outpost, kill the Officers.”

See all 3 Outpost locations in this video guide:

3. Reign of Terror (Bronze) — Kill 5 enemies at the same time with a Guillotine Gun.

Tip: This can be done during the story missions when you first get your hands on the Guillotine Gun in “Memory 2: The Book Thief”. Right after receiving this new weapon, there’s an opportunity presented when the game gives you a tutorial on how the weapon’s alternate fire works. That’s when you’ll encounter a big group of enemies. — If you didn’t kill at least 5 enemies at once, reload the last checkpoint (which is nearby).

This video guide shows how to do it the easy way with Quickshot, but you can also try doing it with two Mortar Shots at the group of enemies.

This video guide shows a fast and easy way of killing a Raider leader. Sneak in, kill the leader, run out.

6. Fraternite! (Silver) — Complete the Heist and the Co-op mission in Dead Kings at least once.

Tip: The co-op mission can be found on the very north end of the map. — The enemies in the Co-Op mission die in 1-2 hits, and the Heist is relatively easy. Both are much easier if you have high tier gear from completing the main game.

This video guide shows how to do it in solo. The Co-Op mission part is done in 18 minutes, while the Heist mission took 6 minutes.

Please comment if you have any Assassin’s Creed Unity: Dead Kings trophy unlock tips of your own. Kudos will be given. – Thanks for visiting!