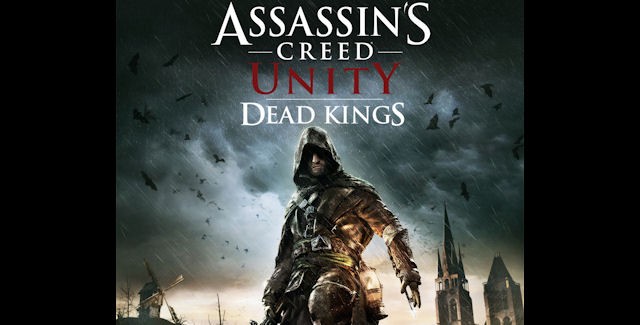 Our Assassin’s Creed Unity: Dead Kings walkthrough will guide you through the beginning to ending moments of gameplay with strategy tips for this action-adventure game’s story DLC on the PS4, Xbox One & PC.

Following the events of Assassin’s Creed Unity, Arno’s quest for redemption will lead him to the dreary town of Saint-Denis on the outskirts of Paris. While the wary and fragile Republic rebuilds itself, disturbing events and a mysterious conspiracy will take Arno down to the depths of the town’s necropolis.

Please note that viewers must be at least 18 to watch, so no harm comes to those with innocent eyes. This game includes Blood and Gore, Intense Violence, Sexual Themes, Strong Language, Use of Alcohol.

After the events of Assassin’s Creed Unity, Arno leaves Paris for Saint Denis, a mysterious city that holds the crypts of deceased French kings. Sent on a mission to the extensive underground of the Basilica, Arno will face a faction of new foes, the Raiders, populating its catacombs. Equipped with a lantern and a new powerful weapon, the Guillotine gun, Arno will have to navigate the dangerous passageways to uncover the darkest secrets of the city.

How To Start The Assassin’s Creed Unity: Dead Kings DLC?: If you’re worried it’s not working, here’s what you do. After you update your game by downloading & installing the Dead Kings DLC. Then go in-game and check your Mini-Map and fast travel to Saints Denis. Once there a cutscene will introduce the new Dead Kings story.

Description: In return for passage out of France, Arno agrees to help the Marquis De Sade retrieve a lost manuscript written by the Marquis de Condorcet.

Escaping the Abbey will lead into Memory 2…

Description: Leon has De Sade’s manuscript, but where is Leon? He was last seen behind the windmill…

Objectives: Find Leon in the underground tunnels. Find the entrance to the tunnels. Investigate the windmill.

Sequence 13 Memory 3: A Shadow from the Past

Tip: Solve the mysteries of the two relics on Dom Poirier’s list to progress to the next memory.

Finding Leon who has the manuscript will start Memory 4…

Objectives: Follow the map on the plates. Solve the 3 riddles.

Part 2 of Memory 4 Objectives: Investigate the crypt. Sneak into the rooms. Solve the puzzle. Sneak inside the final map room. Solve the final puzzle and find the correct keyhole (where he points at).