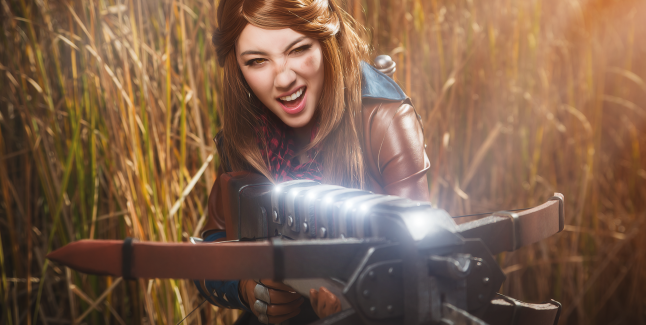 Dragon Age: Inquisition is full of interesting, memorable characters. Characters you’ll surely want to see cosplay of like Amie Lynn’s here, who is demonstrating the suave Varric across these photos.

Here’s the Dragon Age: Inquisition “Varric” image gallery.
Click on any of these image thumbnails to see the full-size cosplay photos: 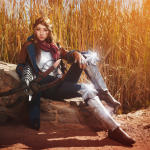 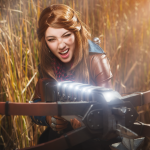 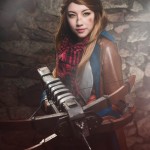 If you haven’t pre-ordered Dragon Age: Inquisition already, what are you waiting for?

And don’t forget to check out the Dragon Age: Inquisition Collector’s Edition!

“If this is all just The Maker winding us up, I hope there’s a damn good punch line coming.” – Varric Tethras

Born on the surface, Varric has little love for his underground brethren — all his contacts lie with the dwarves of the Merchants Guild, though he has little taste for their schemes.

Still, he has found a place as an outsider, rubbing shoulders with both the wealthy elite as well as the worst of scoundrels.

To hear him tell of it, that’s all he truly cares about, though anyone who truly knows him claims differently.

They say that, try as he might, Varric has been drawn more and more into conflicts that shake the world — ones that he can’t get himself out of with a quick tale.

Enter an age where fierce Dragons rule the sky, wrecking havoc over the land, and Mages wage war against the Templars who threaten to tyrranize their once peaceful kingdom. The fate of Thedas rests in your hands, as you lead an army of heroes, and battle against High Dragons, and the demonic forces of Fade, in the ultimate quest to restore hope and peace to a world on the brink of desperation, in this third installment to this action packed Dragon Age saga. 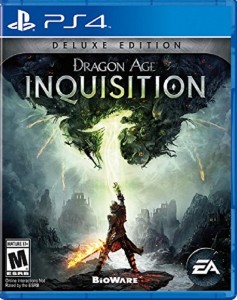 • Fight Your Way – Choose and lead a group of characters into challenging, visually spectacular battles against a variety of enemies – from earth-shattering High Dragons to demonic forces from the otherworld of the Fade. Go toe-to-toe in visceral, heroic combat as your followers fight by your side, or switch to tactical view to coordinate devastating offensives using the combined might of your party.

• Transform the World of Thedas – See the tangible, visible results of your journey through a living world – raise structures, customize outposts, and change the landscape itself as environments are re-shaped in the wake of your Inquisition.

• Deep and Complicates Characters – Lead a party chosen from nine unique, fully-realized characters – each of whom react to your actions and choices differently, forming complex relationships both with you and with each other.

• Customize your Journey – Create your own character from multiple races, customize their appearance, and select their powers and abilities as the game progresses. Extensive customization options allow you to choose everything from the color of your follower’s boots to the features of your Inquisition stronghold.

• Make Your Mark On the Dragon Age – Become an agent of change in a time of uncertainty and upheaval. Shape the course of empires, bring war or peace to factions in conflict, and drive the ultimate fate of the Inquisition. Will you stop the cataclysmic anarchy gripping the Dragon Age?

• Multiplayer – Dragon Age: Inquisition will include a multiplayer mode for the first time in the franchise adding a new layer of action-packed replayability across fast-paced tactical four player co-op matches.

Even from a very young age, I have always been entranced with the magic of a video game. A video game was my escape from a boring world into a fantasy world, filled with side-quests, challenges, catchy jingles, and fearsome enemies. This is also why reading was another one of my favorite past times.

Throughout my childhood I would pair the adventures I would embark on in video games and books with the world around me. I imagined myself as a forest princess, a renegade mercenary, a great explorer of the land. My imagination was the limit.

My true love for video games occurred during my first experience with tackling a difficult boss. My big family often gathered around the television playing through the latest PS1 video game and we would take turns failing, and conquering the several challenges that blocked our path to beating the game.

We were playing Metal Gear Solid, and Grey Fox was dodging and slicing and being a total nuisance. Everyone in my family tried and failed, and then the controller was handed to me. I felt confident about my tactics and went for the kill. Success!

We could say after the satisfying win and an unforgettable cut-scene of Otacon’s wet pants, I was a gamer for life.”

Go Behind the Scenes on the Genderbend Varric cosplay photoshoot:

What do you think of her Varric cosplay?