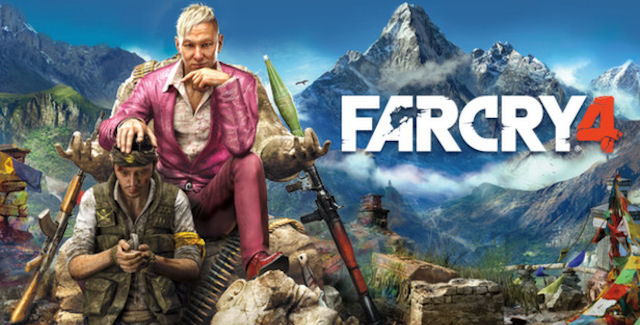 Our Far Cry 4 walkthrough will guide you through the beginning to ending moments of gameplay with strategy tips for this action-adventure FPS game on the PS3, PS4, Xbox 360, Xbox One & PC.

While travelling to Kyrat to fulfill your mother’s dying wish, you find yourself in a middle of a civil war between the Golden Path and the tyrant Pagan Min. But in order to win this fight, you must break the stalemate between Amita and Sabal, the two leaders of the Golden Path. Will you make the right choice?

Let’s start the Far Cry 4 walkthrough with an introduction video!

Please note that viewers must be at least 18 to watch, so no harm comes to those with innocent eyes. This game includes Blood, Intense Violence, Nudity, Sexual Themes, Strong Language, Use of Drugs.

In Far Cry 4, players find themselves in Kyrat, a breathtaking, perilous, and wild region of the Himalayas struggling under the regime of a despotic self-appointed king. Using a vast array of weapons, vehicles, and animals, players will write their own story across an exotic open world landscape.

In Far Cry 4 the Kyrat experience takes many forms and allows you to explore an incredible systemic world where every second is a story, whether delving into adventure and intrigue in single-player, taking on enemies and outposts in drop-in/drop-out co-op or competing with other players in PvP.

Hidden in the towering Himalayas lies Kyrat, a country steeped in tradition and violence. You are Ajay Ghale. Traveling to Kyrat to fulfill your mother’s dying wish, you find yourself caught up in a civil war to overthrow the oppressive regime of dictator Pagan Min. Explore and navigate this vast open world, where danger and unpredictability lurk around every corner. Here, every decision counts, and every second is a story. Welcome to Kyrat.

Not every journey should be taken alone. Far Cry 4 delivers the most expansive Far Cry experience ever, with integrated drop-in/drop-out open world co-op play. Bring a friend to Kyrat and experience scouting from above in a gyrocopter or hunting on the back of a six-ton elephant. You’ll now be able to discover and explore the massive, living world of Kyrat together, where every second is a story.

– Pagan Min: The charismatic ruler of Kyrat is as ruthless as he is charming. The Hong Kong native came into Kyrat with his own army and took control during an unstable period in Kyrat’s history. The self-appointed king rules as a violent dictator, installing deranged governors to exploit the people and land resources for his personal gain. Pagan Min is obsessed with self-image and with the past

– Ajay Ghale: Ajay was born in Kyrat, but his mother took him to the United States when he was very young. He grew up knowing little about his place of birth as his mother, Ishwari, rarely spoke of it. Now Ajay has to return to Kyrat to fufill his mother’s dying wish: Take me back to Lakshmana.

– Yuma: Yuma is a deadly tactician, a general of the Royal Army, and Pagan Min’s right-hand woman.

While out in the wild, you’ll cross paths with a wide variety of animals, both exotic and deadly. They can be useful resources or unforgiving enemies – it all depends on your approach.

A vast expanse of hills and valleys bordered by the Himalayan peaks, Kyrat’s varied landscape and biomes mean getting around isn’t always as simple as jumping into a car or tuk-tuk. Going up will be more important than ever. In rough terrain, you might need to climb aboard a powerful elephant, or take to the skies with a gyrocopter, jump from it, and wingsuit down to any hard-to-reach point.

From the traditional kukri blade to the high-impact mortar, every weapon in Far Cry 4 lets you determine your own approach. Check out some of the arsenal you’ll have at your disposal.

Welcome to the Far Cry 4 walkthrough!

XCV will be your pro gamer guide showing you around the game’s areas safely.

Well, that was quite the welcome To Kyrat.

Let’s continue our trip into the wolves’ den.

Here we learn how to stop the propaganda machine.