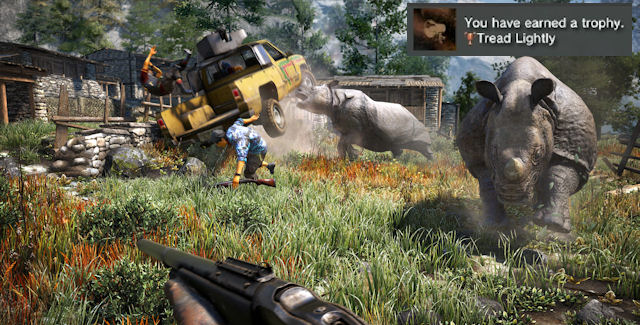 The Far Cry 4 trophies guide lists every trophy for this PS3 & PS4 action-adventure first-person shooter game and tells you how to get and unlock them.

1. Master Of Kyrat (Platinum) — Obtain all the Trophies.

2. Deliver Us From Evil (Bronze) — Liberate 12 Outposts (Campaign only).

3. All Clear (Silver) — Liberate all Outposts (Campaign only).

4. Tread Lightly (Bronze) — Liberate any Outpost without triggering an alarm in any mode (Campaign only).

Location: Easily done very early on in the game on the Outpost “Kyra Tea Weigh Station”. You will want to silently approach the outpost without being spotted. Go towards the speaker icon on the mini-map and interact with the speaker to disable the alarm. Once it is disabled, just kill all the enemies however you want in order to get the trophy to unlock.

Alternatively, this trophy can also be easily done in the first outpost of the game during the prologue by running to centre of the area and protecting the speaker controls from being activated by the enemies.

8. Trigger-Man (Bronze) — Complete 3 Assassination or Eye for an Eye quests (Campaign only).

9. No One Left Behind (Bronze) — Rescue 15 hostages in Hostage Rescue quests (Campaign only).

12. Robin Hood (Bronze) — Hijack 3 Royal Cargo Trucks and return them to a liberated Outpost (Campaign only).

16. Changing Lanes (Silver) — Perform a Vehicle Takedown from the passenger seat of a vehicle (Campaign Co-op only).

Tip: You’ll need to buy the “Vehicle Takedown” Skill. This enables you to pull up alongside an enemy vehicle and press the right analog stick to kill the driver and front passenger.

This video guide gives an example of how to do a vehicle takedown from the passenger seat.

17. Fixer-Upper (Bronze) — Purchase 3 items for the Ghale Homestead (Campaign only).

18. Exorcist (Bronze) — Remove or destroy 15 Masks of Yalung (Campaign only).

26. Tricked Out (Bronze) — Craft 5 upgrades for your equipment (Campaign only).

29. Custom-Fitted (Bronze) — Buy all attachments and paint schemes for a single weapon (Campaign only).

Requirement: 200,000 Kyrat Dollars. Money is very easy to get in this game. Just loot some corpses or open loot chest and you will have enough money within a couple of minutes.

Location: Go to a weapon locker or merchant and select a weapon that doesn’t have any attachments, for example the AK-47.

You will only need to buy the 6 paint schemes. The weapons that don’t have any attachments are the cheapest option.

Requirement: Get the “Elephant Rider” skill unlocked from the Skills menu.

Now, you will want to go to the Shanath Breeders (X: 379.7, Y: 573.8) Outpost. If it is your first time there, you’ll notice a caged elephant in the middle of the outpost. Go inside, and ride the elephant by pressing X/Square. Use LS & RS to break out of the cage and begin to kill enemies using the elephant attacks and NOT your gun. After your elephant dies, clear the base for the first time, and you will capture the outpost.

If the outpost is captured, go to the flag icon on your map while inside to trigger the “Outpost Master” quest. This will start a quest, repopulate the outpost with enemies, and spawn you on the outside. Repeat the same process as listed above. Go inside, ride the elephant, kill people & replay the event until the trophy unlocks! It should take between 3-4 times before it unlocks.

Requirement: Fast travel to any location and purchase the RPG-7 for 160,000 K Rupees.

From the outside of the base, you’ll just want to run in, shoot someone and let the enemies call for reinforcements. When the reinforcements are called, follow the road downhill from the base. Once the reinforcements are called in, two trucks will spawn near the bottom of the hill not far from the base. The first truck will have a turret, but only 3 enemies, so let it pass. The second truck will have 4 enemies, so use your RPG-7 and shoot it once to cause an explosion and kill all 4 enemies, in order to unlock the trophy.

35. From A Distance (Bronze) — Kill a target from 60m or more with an arrow or bolt (Campaign only).

Requirements: You’ll need to purchase and equip the Recurve Bow (K 60,000) and Marksman Sight (K 32,000) in order to make this trophy a lot easier.

Location: Now you can use the map to fast travel to any previously liberated towers or outposts, and then you’ll want to choose any outpost. Go to that outpost, and approach it. Use your binoculars to mark some enemies, and use the distance to the outpost as a reference for your distance.

You’ll want to line up your arrow and use the markers in the scope to compensate for arrow drop. Just line up your shoot, and kill the enemy from 60m or more to unlock the trophy. If you miss or are spotted, you can die and respawn at a checkpoint to try again.

Requirement: The first step is acquiring a sniper rifle. You can find one on and enemy, or buy one from any fast travel location. I recommend using the SVD.

Location: Next, you’ll want to go to Rochan Brick Shipping Co. Outpost (X: 392.8 Y: 505.0) on your map. If you’ve already captured it, just start the “Outpost Master” quest inside the base.

Once near the base, use your camera to find 2 enemies standing very close to each other next to the road that passes through the base. Line up the headshot to kill both enemies, steady your aim, and shoot to kill both of them. If you miss, just die and try again. Killing both of them with 1 bullet will unlock the trophy.

Note: Using a sniper bullet to shoot an explosive does not work.

37. The Sky Is Falling (Bronze) — Perform a takedown from a Buzzer (Campaign only).

Requirement: You will need to buy the Vehicle Takedown skill in the third column of the Tiger skill tree.

Once inside the buzzer, ascend and fly around above the roads. This works best in an enemy area of the map. Eventually once you find an enemy controlled vehicle (convoy/atv/truck), you’ll want to fly low and pull up right beside it! This will work from both side of the vehicle. Once you are next to it in the buzzer, look at the driver and click RS to preform a “takedown” which will take the character jump and hijack the vehicle and unlock the trophy.

39. Drive-By (Bronze) — Kill 25 enemies while shooting and driving (Campaign only).

40. The Good Fight (Bronze) — Reach Karma Level 2, and purchase any Guns For Hire upgrade (Campaign only).

46. Welcome To Kyrat (Bronze) — Join the Golden Path (Campaign only).

Special thanks to Maka & Powerpyx for the list, tips & guide videos.

Please comment if you have any Far Cry 4 trophy unlock tips of your own. Kudos will be given. – Thanks for visiting!