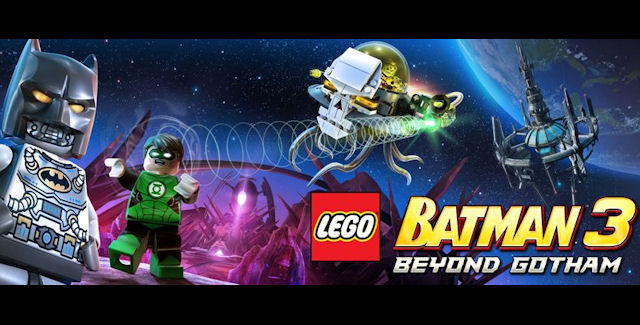 Our 100% Lego Batman 3 walkthrough will guide you through the beginning to ending moments of gameplay with strategy tips for this Action-Adventure on the PS3, PS4, Xbox 360, Xbox One, Wii U & PC. Lego Batman 3: Beyond Gotham is also available on the PS Vita & 3DS.

Join Batman and over 150 DC Comics super heroes and villains in an out-of-this-world adventure!

Lego Batman 3 is rated PEGI 7 in Europe & ESRB E10+ in America for everyone 7 to 10 years or older. This game includes Cartoon Violence and Fear.

In Lego Batman 3: Beyond Gotham, the Caped Crusader joins forces with the super heroes of the DC Comics universe and blasts off to outer space to stop the evil Brainiac from destroying Earth. Using the power of the Lantern Rings, Brainiac shrinks worlds to add to his twisted collection of miniature cities from across the universe. Now the greatest super heroes and the most cunning villains must unite and journey to different Lantern Worlds to collect the Lantern Rings and stop Brainiac before it’s too late.

Question: How many playable DC Comics characters are in the game?

Answer: There are 150+ playable characters in the game. That is, if you’re not counting the 40+ downloadable content (DLC) characters announced so far. You can also save up multiple custom characters using the game’s character creator.

Answer: This can only be done while you’re in Free Play mode (it doesn’t work in Story mode). The “switching characters” button is the same as the “transforming characters” button (that you use to turn into Lego Big Figures). You can only buy a character that you have already unlocked or found the Character Token of, by holding the Triangle button on PlayStation systems / holding the Y button on Xbox systems / holding the X button on Nintendo systems, to bring up the character menu. When you see that character menu, then select the black silhouette of the character you want from the grid and select “Buy” to make it available for you to play with in Free Play mode.

Important Note: Unlocking characters usually involves completing campaign missions, bonus- or side missions, or finding their token hidden throughout the overworld HUB area map. To find out how to get all the characters in the game, please look at our “Lego Batman 3 Unlockable Characters Guide“.

Answer: This can only be done while you’re in Free Play mode (it doesn’t work in Story mode). The “switching characters” button is the same as the “transforming characters (into Lego Big Figures)” button. Hold the Triangle button on PlayStation systems / hold the Y button on Xbox systems / hold the X button on Nintendo systems to bring up the character menu. – Keep in mind that on transforming characters you have to wait until they are halfway through their transform animation, and then hold the same button again for the character menu to pop up.

Question: How to buy vehicles?

Answer: Go to the “Oa” open world hub Lantern Planet to access the vehicles shop. You can then unlock the vehicles you’ve found Vehicle Tokens of — by holding the Y button on Xbox or Triangle button on PlayStation or X button on Nintendo — to bring up the vehicle grid and selecting them to buy them.

Answer: None found yet, but we’ll keep you updated on the “Lego Batman 3 Glitches” page listed above.

If the game does freeze up on you. You can restart your game system after it freezes and you’ll be able to start the Level over.

Question: Where is the Red Brick Station to buy Red Bricks at?

100% means that using this walkthrough and our location guides (listed above), you will see how to solve all puzzles, get all characters & vehicles unlocked, and see where to find all Minikits, Red Bricks, Gold Bricks, as well as where to rescue all Adam West in Peril’s. You are a true hero after all!

The boss in this first level is Killer Croc.
Your voice-over guide through all the levels will be Brian.
Let’s have some family-friendly fun and a brick-smashing good time! 😀

The playable characters in Level 1 are:
Batman
Robin

With Lego Batman 3 now started, in the second level we get to play as Batman and Robin! They will face off against a brainwashed evil Batman.

The playable characters in Level 2 are:
Batman
Robin
Alfred

In outer space we have some work to do with Batman, Robin, Flash, Cyborg and others to take back the Watchtower orbiting Earth from the villains. And then open the hatch for Wonder Woman’s invisible (space)plane to enter the Watchtower.

The fourth level is where we get to play around the Watchtower to clean up all the villains and take on the next boss, Firefly.

The playable characters in Level 4 are:
Wonder Woman
The Flash
Batman
Superman

In the fifth level we find both heroes and villains working together to gain back control of the Watchtower and then battle Brainiac in his tentacle spaceship.

Brick Interaction Tips:
– You need heat-based attacks like Superman & Martian Manhunter’s heat/laser vision to destroy Gold LEGO objects.
– Batman’s Power Suit can destroy Silver LEGO with his rockets. Same for anyone who can fire rockets.
– Batman’s Sensor Suit has his green X-ray vision (not to mention invisibility stealth mode) that will show you the way when the path is unclear! Which allows him to locate hidden LEGO bricks required for advancing the gameplay in levels.
– Super strength characters can destroy or manipulate LEGO objects that normal characters can’t.
– The “big-figs” like Solomon Grundy and Killer Croc can destroy or manipulate objects in ways even different than characters with normal super strength. For example, Solomon Grundy can dive into swamp spots to find hidden items.
– A characters with mind control like Martian Manhunter can take over enemy characters in levels to move them around to do your bidding, like moving LEGO objects that are normally out of your reach.
– Cyborg’s Sonar Suit can shatter Blue LEGO Glass. To use, hold the X button on Xbox systems / hold the Square button on PlayStation systems / hold the Y button on Nintendo systems.