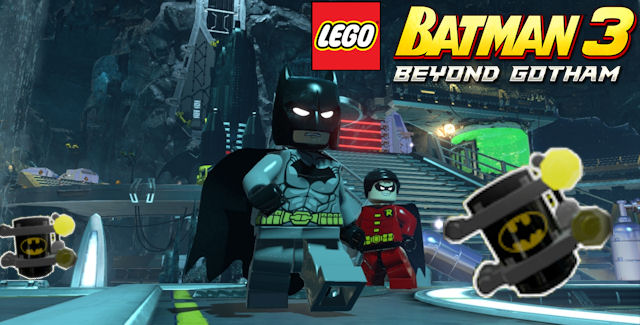 Tip: Go and find the “Minikits Finder” Red Brick first. This detector Red Brick can be found in “Level 8: Big Trouble in Little Gotham”. During the “Objective 4: Defeat Brainiac” boss fight go to the far-right, then use Lantern powers to dig up Lego bricks from the dirt patch and switch to Plastic Man to activate his special red/yellow pad. (The cheat to unlock Plastic Man is “H2VB8Z”.) Once you grabbed it, you’ll need to buy it for 200,000 studs at the Batcave’s right-side Trophy Room or Watchtower’s Red Brick Station. — Alternatively, you can get it for free with the “JYJAFX” cheat. — Finally, once you have it, you can activate it in the pause menu’s cheat section.
Having this Red Brick activated will make it a lot easier to find all the other Minikits in levels, because they will be pointed out to you with an arrow on-screen.

The overview for all these in-game Minikits locations is listed below.

There are 10 Minikits in each of the game’s 16 levels, making for a total of 160 Minikits!

How to find missing Minikits?: In-game the Minikits will appear simply as a “Lego Mini Kit”, which looks like a black scubadiving air bottle with bright yellow lights on the right side of it AND the yellow & black Batman logo on the middle of it. It can be confirmed as being Minikits simply by walking into to it, as the on-screen counter will then tell you that you’ve collected another Minikit.

Collecting Tip: You can select Free Play to replay Story Missions, which allows you to use all characters you have unlocked. So after beating the game, first try to have as many characters unlocked (with all the abilities needed) before you go for many of these Minikits.

Note About Progress: You can track your Minikits collecting progress as you find each one, as the current count will then (for a few seconds) be indicated on the bottom-left of your screen. — After you’ve completed each level the game will tell you, on a results-screen, how many Minikits you’ve picked up in total.

Where to find all Minikits in Lego Batman 3? The in-game collectibles locations for the Minikits are described in this detailed guide.

The Minikits are listed in the order that they appear through chronological progression.

Level 1: Pursuers in the Sewers Minikits

All 10 of the Minikit locations on the “Pursuers in the Sewers” level of Story Mode are shown in this video guide.

• Minikit Location #1: Appears after you find 25 LEGO parts to pump into the yellow machine. Use Robin’s Hazard Suit to grab the LEGO parts you come across in the Level 1 sewers.

• Minikit Location #2: Use a character with laser/heat vision like Superman to destroy the 5 gold toilets found throughout Level 1.

• Minikit Location #3: Go to the section with 2 pipes that have flaming fire coming out of them. When you first play the level in Story mode, it’s where Robin can climb the stairs and switch off the fire with the buttons above. In that same section you’ll find a gold pipe to destroy right above the buttons. After that magnetize the water valve to turn it open (so water comes out to make the flames vanish) and that makes the Minikit appear.

• Minikit Location #4: In the water tank & hatch platforms section, look behind the waterfall there, and use a character with mind control like Martian Manhunter on the enemy goon to make him pull a lever & walk and jump right to grab the next Minikit piece.

• Minikit Location #5: Near the end of Level 1 during the Killer Croc boss fight, use a character with laser/heat vision like Superman to destroy the 5 gold water barrels in the background.

• Minikit Location #6: Still near the end of Level 1 during the Killer Croc boss fight, use a character who can fly/hover and go to the pipe with a silver patch. It’s in the same area as the 5 golden water barrels from before, just go further left. Destroy that silver patch with an explosive rocket form Batman’s Power Suit to break it, so both water and the Minikit come out.

• Minikit Location #7: During the Killer Croc boss fight, switch to a character who can fly like Superman to go right and look for the large pipes. It’s behind them where the Minikit is hidden.

• Minikit Location #8: Near the end of Level 1 when you encounter the second yellow sewer machine (that accepts the by Robin’s Hazard Suit collected blocks) go right and use magnetism (like Cyborg’s Magnet Suit) to open the blue bars and enter a Free Play room through the pipe. Once there, use a character with laser/heat vision like Superman or Martian Manhunter to shoot at the sides & thus cut out the sides of the gold wall until it falls down.

• Minikit Location #9: In that same Free Play room we just entered, switch to Solomon Grundy to dig up a large silver crate at the swamp spot. Destroy said crate with an explosive rocket form Batman’s Power Suit to get the Minikit out of it.

• Minikit Location #10: Still in that same Free Play room we entered, on the right side you’ll see piping. Use magnetism (from Cyborg’s Magnet Suit) to guide a metal ball from one side to another through pipes. Then the final Minikit of Level 1 will appear.

All 10 of the Minikit locations on the “Breaking BATS!” level of Story Mode are shown in this video guide.

All 10 of the Minikit locations on the “Space suits you, Sir!” level of Story Mode are shown in this video guide.

All 10 of the Minikit locations on the “Space Station Infestation” level of Story Mode are shown in this video guide.

All 10 of the Minikit locations on the “The Big Grapple” level of Story Mode are shown in this video guide.