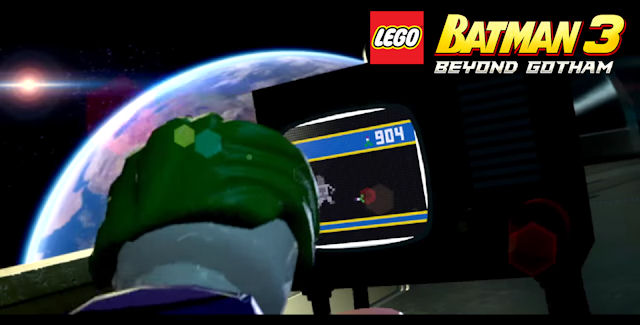 Let’s take a look at some funny Lego Batman 3 easter eggs! They can be found if you know where to look! 🙂

Easter eggs have been confirmed for Lego Batman 3: Beyond Gotham. Watch footage of them all below.

Here’s a little easter egg you can find at the start of the game in “Level 4: Space Station Infestation” that’s a reference to the classic 2D games on the old consoles like the Atari 2600 that used a joystick.

At 3:10 minutes into this video you’ll see the Joker gaming scene:

If you’ve ever watched the 1960’s comedic adventures of Batman on TV, then you’ll know that the original Batman was played by actor Adam West back then in a 120 episode series. Repeats of that TV show must have aired for 30 years on TV, because I’ve watched them too as a kid. Anyway, to celebrate 75 years of Batman, Adam West now does the voice if you change into the classic ’66 Batman Suit in-game (as well as in the whole extra “Batman 75th Pack” DLC Mission).

Here’s a funny video where you find out at 2:40 minutes what the now grey-haired actor Adam West thinks of the game:

Next is an interview with the game’s creators how they went about adding Adam West into the game:

Look for “The Green Room” to find the hidden celebrity party in Lego Batman 3. There’s a dance floor easter egg like this in most Lego games.

In the Xbox One and PlayStation 4 versions of Lego Batman 3, there’s a hidden easter egg on the character selection screen. Leave the cursor standing still on each character for 4 seconds and said character will start to sing / hum the classic Batman theme!

Similarly, the Wonder Woman theme and Superman theme song can be hear while flying with those two characters.

This video showcases all of the characters that sing their own version of the 1960’s Batman theme.

When you finish the game’s Story Mode, by completing “Level 15: Breaking the Ice”, be sure to watch the credits all the way to the end, because afterwards you’ll usually see a playful nod to other Warner Bros. universe characters or perhaps a hint to another sequel. Just like how Lego Batman 2 hinted at Lego Batman 3 in a post-credits ending cutscene.

[WORK-IN-PROGRESS: No video yet. We’ll keep updating this page.]

I’m sure there’s even more than these easter eggs. So please post in the comments section below to let us know. If you do, we’ll add them to this page with credit to you. 🙂

Have you found any Lego Batman 3 easter eggs?