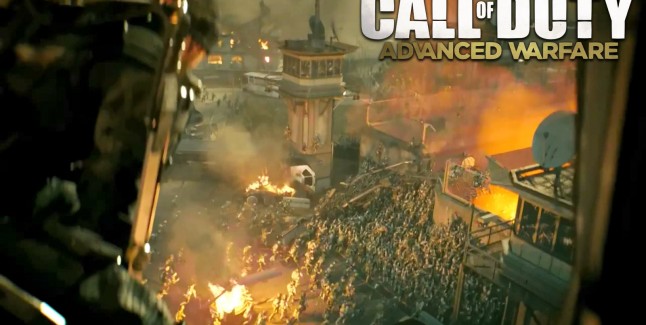 Here we will show you how to unlock all Call of Duty: Advanced Warfare codes with a cheats list that’s valid for the PC, Xbox One, PS4, Xbox 360 & PS3 versions.

How To Unlock The Zombies Mode?

You might have noticed that the rumored Zombies Mode is not available from the start of the game.

Zombies Mode Preview: In the meantime you can play against these new, faster zombies in the Exo-Survival Co-Op Mode’s bonus wave. To make zombies appear in this new mode, you will have to unlock every single map in the Exo-Survival co-op mode. As you fight 225 rounds across the 4 Tiers of maps, then on the final Riot map you have to fight 10 rounds and THEN in round 11 you get to play zombies.

The Atlas Gorge Map DLC Code only comes as a bonus with the Season Pass or with the Collector’s Editions — namely the Atlas Limited Edition, Atlas Pro Edition & Digital Pro Edition — of Call of Duty: Advanced Warfare. Activision confirmed if you get the game on Xbox 360, PS3, PC (including Steam), PS4 & Xbox One it’ll include the DLC code to download the Bonus Map from November 3rd, 2014.

Atlas Gorge re-envisions the fan-favorite Call of Duty 4: Modern Warfare map, Pipeline, re-imagined for the new Call of Duty: Advanced Warfare exoskeleton abilities. The Atlas Corporation has commandeered the world’s largest power source, the Three Gorges Dam in central China, creating a gripping setting for a multiplayer battle. Combatants will navigate the shadows and control a map-based turret scorestreak that overlooks the dam and helps to keep enemies at bay, all while leveraging new abilities and tactics enabled by exoskeleton technology, such as vertical combat, new sightlines, and strategic vantage points.

Note: Although I’m guessing the Atlas Gorge map will become available at some point after launch for everyone to play, hopefully as free DLC.

Here’s the official “Atlas Gorge” video that shows the first gameplay footage of the multiplayer map.

Pre-order Call of Duty: Advanced Warfare and receive a Free Upgrade to the Day Zero Edition! Which not only gives you access to the game on November 3rd, a full 24 hours in advance of the standard edition launch, it also includes:

Here’s the official “Advanced Arsenal” video that shows all these weapons in action.

On top of that the CE’s and Digital Pro Edition will give you even more extra weapons:

— Two (2) Weapons – The Bal-27 AE Assault Rifle and the Atlas 45 AE Pistol: Trick out your loadout with these two sleek weapons fitted with an Atlas Corporation theme to match your other custom content.
— Atlas Exoskeleton: Strike fear into competition with your PMC-issued, white, red & black custom Atlas exoskeleton, and ensure opponents remember who took them out.
— Atlas Helmet: A state-of-the-art custom Atlas helmet.
— Atlas Player Card: Leave your mark on any killcam with an Atlas player card, featuring both a custom Atlas calling card & emblem.
— Five (5) Bonus Supply Drops: Be prepared for battle as soon as you boot up with five bonus supply drops, which unlock a variety of in-game content from player customization gear to weapons.
— Single Player Exoskeleton Upgrade Token: Over the course of Campaign mode, players unlock exoskeleton perks and abilities that help tackle various obstacles and challenges. This token provides an extra upgrade for your exoskeleton, so you’re already at an advantage when jumping into the Campaign.

Note: The $50 Season Pass adds 4 DLC Packs with 4 multiplayer maps each, along with early access to bonus DLC weapons.

Work-In-Progress: That’s it for now. Expect more cheats & extras to be added to this page after launch, as they get discovered.

Do you know of any Call of Duty: Advanced Warfare cheats or unlockables?
Let us know in the comments, you’ll get credit for finding out. – Thanks for visiting!