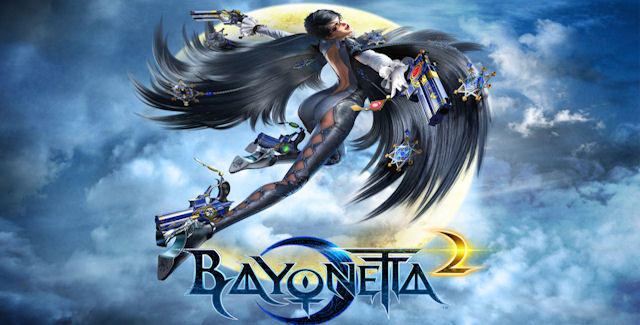 The Bayonetta 2 walkthrough will guide you through the beginning to ending moments of gameplay with strategy tips for this hack and slash action game on the Wii U exclusively. It also serves as a Bayonetta 2 Verses locations guide.

The witch is back! The witching hour strikes again. Brimming with intricate battles that take place in, on, and all over epic set pieces, Bayonetta 2 finds our sassy heroine battling angels and demons in unearthly beautiful HD. You’re bound to love how it feels to string together combos with unimaginable weapons and summon demons using Bayonetta’s Umbran Weave in this frantic stylized action game. Bayonetta 2 is a Nintendo Wii U-exclusive.

Let’s start the Bayonetta 2 walkthrough with an introduction video!

Please note that viewers must be at least 16 or 17 to watch, in Europe & America respectively, so no harm comes to those with innocent eyes. This game includes Blood and Gore, Intense Violence, Partial Nudity, Strong Language, Suggestive Themes.

Neither Heaven Nor Hell Can Stop Her!

Bayonetta’s back and more powerful than ever.

In this climactic sequel to the critically acclaimed Bayonetta action game, players will be on the edge of their seats from start to finish. Brimming with jaw-dropping battles and gorgeous cut scenes, this game never lets up on the action. Fight on top of a jet as it soars through a downtown city. Duke it out against a giant angelic monster with a deadly whip-like arm on top of a speeding train. And take to the skies in a fight against a demonic dragon while ascending to the top of a skyscraper.

Wield wild new weapons and execute deadly new moves—like the powerful Umbran Climax—to take out angels and demons in this breathtaking action game. You can even team up with friends in 2-player online* co-op fights.

Bayonetta is a butt-kicking, havoc-wreaking witch who wields sweet weapons like pistols, whips, hammers, flamethrowers, and poison bows. But it’s not just about brawn—it’s also about style. Bayonetta is deadly but sleek, with moves like Witch Time that slows down time itself, and the all-new Umbran Climax—a special magic attack that summons Infernal Demons to devastate enemies. Bayonetta 2 also features an all-new online 2-player cooperative mode where players bet halos on their performance and work together to amplify their sass, cause destruction, and score some riches.

Intro: Records of Time – The End

Welcome to the Bayonetta 2 walkthrough! This is going to be epic! 😀

Daedron will be your progamer guide showing you around the game’s chapters on the hardest difficulty level, 3rd Climax, with a Platinum Rank.

In the game intro Bayonetta’s longtime friend and fellow Umbra Witch, Jeanne, appears to assist Bayonetta in performing combination attacks and in doling out intense punishment against enemies.

You cannot die here and nothing you do actually affects anything. Just go to town on the poor enemies.

Note: Each chapter will be completed with all or most of the hidden verses locations found.

Hint: Remember, you can also take all the action off the big screen and enjoy off-TV play using the Wii U GamePad.

– Take your time on the plane, the scene transitions automatically after a certain amount of time has passed. Even if you kill enemies quickly, new ones will keep spawning in infinitely.
– When you’re on the train fighting the Belief and he’s clinging on, it might be better to not move across its arm to its head to perform the punish QTE. It takes time and the combo points you get from doing it aren’t worth it. For ranked play, it’s better to keep wailing on the arm.
– Gomorrah is a pretty easy fight, most of its attacks are highly telegraphed so reasonably easy to dodge. To keep your combo going from beginning to end, make sure to shoot as he’s climbing up the tower.

– The Classic Controls represent the technical control scheme unique to Bayonetta, an acclaimed control scheme that fans of the previous game love and all action game fans will enjoy.
– The Touch Controls, on the other hand, offer a more convenient play style for those unfamiliar with action games or simply looking for a new spin on action. Players can use the Wii U GamePad touch screen controls to easily manipulate Bayonetta as she moves, attacks and evades enemies.

Chapter 1: Noatun, the City of Genesis

In this first chapter you immediately get access to the Panther Within, allowing swift movement across the stage.

You also get access to shop in this chapter, allowing you to buy skills, weapons, items and accessories. It’s recommended that you buy Bat Within ASAP, it basically adds free frames where you’re allowed to dodge right as you get hit.

Hidden Verses Locations: This chapter has a lot of hidden verses, 7 in total. This means about half of them are missable. Though 4 of those are Muspelheim and relatively easy to spot with one exception.

• Verse 1: Muspelheim. After crossing the big plaza and standing in front of the temple submerged in water, look to your left. The portal is in front of a gate.
• Verse 3: After the underwater fight in verse 2, continue on and stay on the left hand-side. Jump over the rubble to find a Muspelheim.
• Verse 4: After coming up out of the water, instead of continuing towards the Gates of Hell portal. Go in the other direction towards the dead end.
• Verse 5: At the plaza, there’s a Muspelheim on the left hand-side, underwater under the archway. Not sure if it’s there from the beginning or if you have to beat Verse 6 first. I missed this one in the video guide above.
• Verse 8: After the Valiance fight, stay on the 2nd floor of the temple and move to the right hand-side for a Muspelheim.
• Verse 11: After Verse 10 is completed, backtrack to the main area of the temple where you freed Loki.
• Verse 12: At the area with the small bridge. Jump in the water and go towards the big open area.

Chapter 2: A Remembrance of Time

In the second chapter you get introduced to some annoying enemies that put enrage status on the enemies, this pretty much makes them as difficult as normal Infinite Climax enemies (with the damage to boot!) so unless you’re feeling gutsy, take them out ASAP.

You also obtain Kafka in this chapter. This weapon is overall pretty meh imo. I don’t know any situation where Love is Blue isn’t better, for both damage output and combo points. I guess if you love bows, use it. Otherwise keep using Love is Blue.

Hidden Verses Locations: Compared to the first chapter, this one’s pretty short and doesn’t have as many missable verses, but the ones that are missable are very easily overlooked.

• Verse 1: Muspelheim in an alley on the right of the starting area.
• Verse 3: After Loki triggers the tidal wave, evade then go back to the plaza.
• Verse 4: After the talk between Loki and Bayonetta, open the door, go inside a little bit(not necessary?) then go back outside.
• Verse 6: Near where the LP for Kafka spawns, open the 2 chests.
• Verse 9: Muspelheim, in plain sight.

Chapter 3: Paradiso – The Gates of Paradise

– The first and second phase are timed. You can pretty much hold down shoot, dodge the debris and Glamor’s tail as it goes through the water. Prepare to dodge when it faces you, as it’s about to do a charge attack.
– The third phase is an aerial battle. You fight against three Glamor’s total. The first two have low HP and fall quickly. After defeating them, you battle the “main” Glamor.
– It has some new attacks but nothing too terribly hard to see coming.
– When it enrages, it will swipe you 4 times, whenever you dodge Witch time will be triggered for a very very small amount of time. But dodge the 4th swipe and you enter Witch Time for a long time.
– It’s recommended you use Love is Blue on your hands almost exclusively on this fight to keep your combo going. Having Raksasha equipped on hands makes it miss more often than not unless you go for PKP wicked weaves.

Note: There are no Verses hidden in boss chapters.

Bayonetta 2 Walkthrough continues on Page 2 with Chapter 4: The Two Meet.