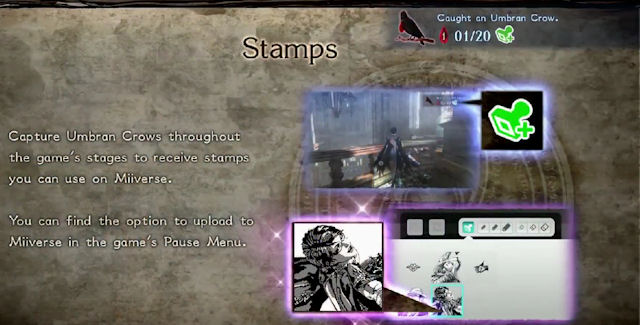 Welcome to the Bayonetta 2 Umbran Crows locations guide that helps you find the total of 20 Umbran Crow locations in the Wii U hack and slash action game.

Bonus: Finding & catching the Umbran Crow locations and picking them up will help unlock stamps you can use on Miiverse. You can find the option to upload to Miiverse in the game’s Pause Menu.

The Timeline for all these in-game Umbran Crows locations is listed below.

How to find missing Umbran Crows?: In-game the Umbran Crows will appear simply as small black colored crow (with a red glowing outline) that you can pick up to collect when you catch it. Yes indeed, you have to catch it fast before they are alerted to your presence or they will fly away! (They won’t disappear, you’ll be able to catch it again, don’t worry you’ll be able to hear their wings flapping and a caw sound when they’ve returned.) It can be confirmed as being Umbran Crows simply by walking/flying up to it, as after touching it it disappears, and the on-screen text will then tell you that you have “Caught an Umbran Crow.”

Does the game save each Umbran Crows you collect?: Yes, the game will automatically save the Umbran Crows you just collected if you picked up the Umbran Crow, so you don’t have to play to the end of the chapter. Although it is always recommended to play until the next Verse checkpoint, so you’re positive you won’t lose your collectibles progress.

Tip: Move quickly to catch crows with the “Panther Within” speedrunning move on the ground or in the air by holding in the Left analog stick in any direction and pressing the ZR shoulder button twice.

Where to find all Umbran Crows in Bayonetta 2? The in-game collectibles locations for the Umbran Crows are described in this detailed video guide.

The Umbran Crows are listed in the video in the order that they appear chronologically.

Timeline in minutes for the Umbran Crows Locations Guide:

There you go! All Umbran Crows in Bayonetta 2 are yours! 🙂

Huge thanks to General_Beatrix for the guide video and tips.

Please comment if you have any additional Bayonetta 2 Umbran Crows location tips of your own, we’ll give you credit for it. – Thanks for visiting!