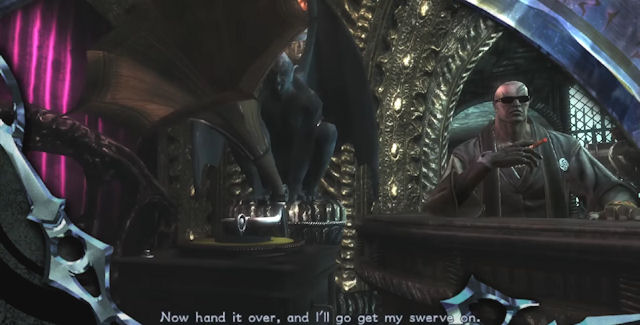 Welcome to the Bayonetta 2 Golden LP locations guide that helps you find the Angelic Hymns Gold LPs locations that unlock weapons in the Wii U hack and slash action game.

The Timeline for all these in-game Golden LP locations is listed below.

How to find missing Golden LP?: In-game the Golden LP will appear simply as a large rotating & floating gold-colored LP that you can pick up to collect when you stand next to it. It can be confirmed as being Golden LP simply by walking up to it, as the on-screen text will then tell you what song is on the Golden LP. – It is accompanied by the following on-screen message: “A golden LP featuring the crystallized voices of angels. Some sort of silhouette is drawn upon the surface.”

Does the game save each Golden LP you collect?: Yes, the game will automatically save the Golden LP you just collected if you picked up the Golden LP, so you don’t have to play to the end of the mission. — Unless of course you’ve encountered an LP that’s split into pieces, those you’ll first need to collect entirely. — Plus it is always recommended to play until the next Verse checkpoint, so you’re positive you won’t lose your collectibles progress.

Tip: You can find 2/3rds of the Golden LP for Takemikazuchi in Chapter 8: An Ancient Civilisation.

Unlocking Weapons With LPs: Bring these Gold LP to Rodin in The Gates of Hell store to unlock brand new weapons to add to Bayonetta’s arsenal.

Where to find all Golden LP in Bayonetta 2? The in-game collectibles locations for the Golden LP are described in this detailed video guide.

The Golden LP are listed in the video in the order that they appear.

Timeline in minutes for the Golden LP Locations Guide:

• [03:34] — Golden LP Location for “Erlkonig” that unlocks the “Chernobog” weapon: In Chapter 5: The Cathedral of Cascades – At the very start.

• [04:54] — Golden LP Location for “The Harmonious Blacksmith” that unlocks the “Takemikazuchi” weapon: In Chapter 8: An Ancient Civilisation – Verse 5.

• [06:44] — Golden LP Location for “Matthaus-Passion O Haupt voll Blut und Wunden” that unlocks the “Salamandra” weapon: In Chapter 10: The Depths – At the very start, off to the right.

For example, here’s how to beat Chapter 16: Sovereign Power and the Aesir final boss on 3rd Climax difficulty:

• The last Golden LP piece can be found in Chapter 9: The Gates to Hell. – After Verse 4, stand in front of the broken stairs then look down and left. Jump on the path that circles around the building. The LP is at the end (as shown in this next video guide).

There you go! The best Golden LP in Bayonetta 2 are yours! 🙂

Huge thanks to General_Beatrix & Daedron for the guide videos and tips.

Please comment if you have any additional Bayonetta 2 Golden LP location tips of your own, we’ll give you credit for it. – Thanks for visiting!