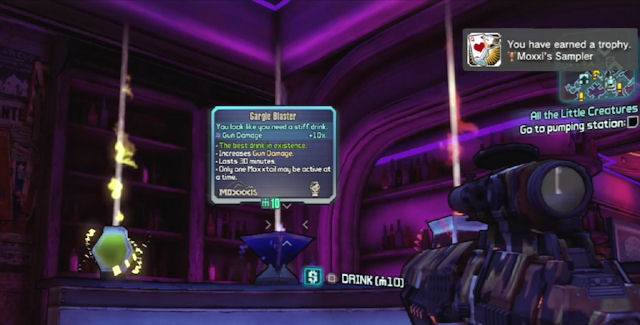 The Borderlands: The Pre-Sequel trophies guide lists every trophy for this PS3 FPS Action-RPG game and tells you how to get and unlock them.

In the Borderlands: The Pre-Sequel trophy guide we’ll show there are 51 Trophies (20 Hidden) that can be earned in the PS3 version. Earn Bronze (39), Silver (9), Gold (2), and Platinum (1) Trophies to increase your Gamer Level.

Index of Borderlands: The Pre-Sequel Guides:

1. Borderland Defender Round 1.5 (Platinum) — Unlocked all Borderlands: The Pre-Sequel trophies.

3. Moon Mission Meister (Silver) — Completed all of the side missions.

5. The Bigger They Are (Gold) — Defeated the Invincible Empyrean Sentinel.

10. Executioner (Bronze) — Killed 10 enemies in a single activation of Showdown.

11. That Tasted Purple! (Bronze) — Had Purple-rated gear or better equipped in every slot.

12. Challenger (Bronze) — Completed level 1 of all challenges with a single character.

Tip: Find out how to max out your level cap in our “Borderlands: The Pre-Sequel: How To Level Up Fast Guide“.

17. Moxxi’s Sampler (Bronze) — Tried all the Moxxtails in the Up Over Bar in Concordia.

Go to the Concordia central hub area and walk into the “Up Over Bar”. Then proceed to drink all the drinks on top of the bar that are sparkling with colorful lights.

19. I Come From The Land Up Over (Bronze) — Discovered all named locations in Serenity’s Waste, Triton Flats and Stanton’s Liver.

20. Beam Me Up (Bronze) — Discovered all named locations aboard the Helios Space Station.

25. Collateral Damage (Bronze) — Had a Lost Legion Eternal kill 3 of his friends.

26. 360 No Scope (Bronze) — While airborne, spun 360 degrees then got a kill with a Sniper Rifle without using the scope.

This can be done early on in the game as you get a Sniper Rifle at the beginning.

For example, on the “Follow Your Heart” mission, you can first take off more than half of an enemy’s health, and secondly do a 360 degrees circle jump in the air with your Sniper Rifle already selected… and then at the end of the circle-jump kill that nearby almost-dead enemy with one shot (without zooming in with the rifle’s scope).

28. Ice To Meet You (Bronze) — Shattered 3 frozen enemies with a single slam attack.

29. Elementalist (Bronze) — Had an enemy frozen, corroded, ignited, and electrocuted at the same time.

30. Pancake Parlor (Bronze) — Pancaked an enemy in the Stingray.

Location: You acquire the Stingray vehicle during a Main Mission in Triton Flats.

Tip: Push the L1 button and the Stingray will lift into the air then push the R1 button for a Ground Slam. Search some low health enemies, gather 2 or 3 then use those two shoulder buttons on your controller to pancake at least one flat.

31. Who Needs Air? (Bronze) — Suffocated for 5 continuous minutes without dying.

Tips: The easiest Way to get this Trophy is the Health Regen Drink from Moxxis Bar in Concordia. The Drink cost 10 Moonstones and gives you 30 minutes per Health Regeneration. Buy this Drink, go to any Location without Oxygen and wait 5 Minutes. That’s all you have to do.

There are several ways to get the Trophy:
– Health Regenerating Class Mods
– Coop Partner reviving with oxygen
– play as Wilhelm and use the Actionskill

Note: You cannot unlock this Trophy if you play as Claptrap. He doesn’t suffocate!

33. Welcome To The Rock (Bronze) — Completed the mission “Marooned”.

35. I Shot The Meriff (Bronze) — Completed the mission “A New Direction”.

37. Who Constructs The Constructor? (Bronze) — Completed the mission “Let’s Build A Robot Army”.

40. The Guts Of Helios (Silver) — Completed the mission “Watch Your Step”.

44. Once More With Feeling (Bronze) — Completed the mission “Return of Captain Chef”.

46. The Gun In The Stone (Silver) — Removed Excalibastard from the stone.

48. Guardian Guardian (Bronze) — Saved the Guardians from the Scav Poachers.

Please comment if you have any Borderlands: The Pre-Sequel trophy unlock tips of your own. Kudos will be given. – Thanks for visiting!