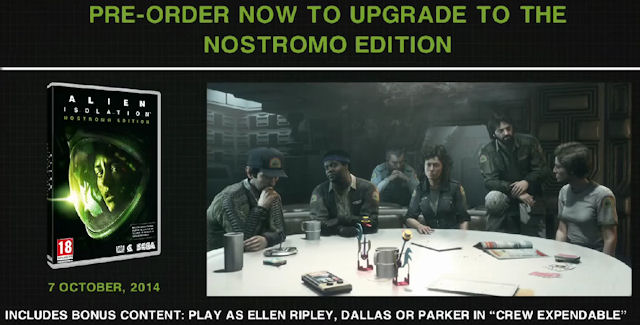 Cheats in Alien Isolation have been replaced with free pre-order bonuses and paid DLC.

• “Crew Expendable” DLC — Anyone in America or Europe who pre-orders the game will get a free upgrade to the Nostromo Edition, which includes the bonus content “Crew Expendable”. Players can choose to play as one of three surviving crewmembers, only moments after Brett’s death at the jaws of the creature. As Ellen Ripley, Dallas or Parker, players can explore the Nostromo from habitation deck down through engineering, coordinating their efforts with Lambert and Ash to lure the Alien into the ship’s airlock. – It is also available as a $4/€4 paid DLC pack.

• “Last Survivor” DLC — Anyone in America or Europe who pre-order at select retailers (like GameStop) will also receive “Last Survivor” in which players pick up the story as Ripley tries to escape on the Narcissus. On hearing the screams of Lambert and Parker, players must navigate their way back down through the Nostromo in order to activate the self-destruct sequence, before retracing their steps back to the Narcissus shuttle and their escape. – It will also be available in a paid DLC pack later on.

Dive deeper into Alien Isolation and get an insight into Creative Assembly’s vision for the game and get gameplay tips and tricks from the creators behind Alien Isolation.

Discover the true meaning of fear in Alien: Isolation, a survival horror set in an atmosphere of constant dread and mortal danger. Fifteen years after the events of Alien, Ellen Ripley’s daughter, Amanda enters a desperate battle for survival, on a mission to unravel the truth behind her mother’s disappearance.

As Amanda, you will navigate through an increasingly volatile world as you find yourself confronted on all sides by a panicked, desperate population and an unpredictable, ruthless Alien.

Underpowered and underprepared, you must scavenge resources, improvise solutions and use your wits, not just to succeed in your mission, but to simply stay alive.

There are no Alien Isolation cheats on PC, Xbox 360, Xbox One, PS3 & PS4 yet. So until they are discovered, we made the handy Alien Isolation guides listed above to help you with tips and tricks for the game!

Do you know of any Alien Isolation cheats or unlockables?
Let us know in the comments, you’ll get credit for finding out. – Thanks for visiting!