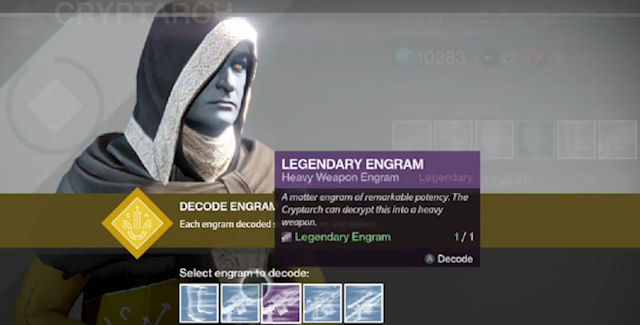 Find out where to farm Engrams in Destiny: Shown at 4:44 minutes in the tutorial.
– Requirements: You need to have at least a level 18 to 20 or higher character.
– Location: On Venus during the “Venus Patrol” Mission; From the Headlands starting area, summon a Sparrow for fast transport past enemies, and follow the right path all the way until you reach the Ishtar Commons area. There, go through the dome-shaped building until you see a battlefield with Vex shooting next to a crashed spaceship in the center, go straight through the middle of that battlefield and make your stand at the back wall.
– How To Do It: Farm the Rare & Legendary Engrams by killing low-level enemies fast on their weak spot; They respawn in close groups all around the same farming spots.

Tip: Remember that when using the above shown Engram farming spot in Destiny, it’s going to be a pretty boring couple of hours no matter which way you slice it. Bungie can also opt to patch it away at any time, so if that happens…

…Instead, you can simply choose to run high level Strike Missions to gain valuable Engrams, like the game intended you to do. Example: On the worlds map select Strike Playlist to do the Level 24 Strike Playlist called “Vanguard Tiger” with a 1-3 Fireteam, which can also straight-up give you an Exotic weapon as an activity reward.

Here are the Engrams listed by rarity from common first to rarest last:

Exotic Engram Location: Buy it from the Xur shop keeper, who’s in the Tower during the weekends only. Available at a price of 23 Mote of Light. The Exotic Engram will give you “(Chest Armor / Random Class)” for having it decoded by the Cryptarch. (Remember, he may also choose to mock you and give you a useless item instead.)

Where To Find Missing Rare Engrams You Forgot To Pick Up: White & green Engrams can be missed permanently if you don’t pick them up. – Luckily, light blue and purple Engrams & Equipment that you have missed can be claimed at the Postmaster in the Tower.

Where To Decode Engrams: After you’ve picked up everything you farmed — excluding white Encoded Engram that get decoded on the spot in the field — you can decode the rest of the Rare, Legendary & Exotic Engrams in your inventory at the Tower at the Cryptarch, Master Rahool, who gives you the resulting Epic and Legendary weapons and armor!

This video guide shows where to find the Postmaster & the Cryptarch in the Tower:

But instead of guessing let’s calculate the Engram Decryption Odds…

As we all know, the Cryptarch is a cheap b*st*rd! He hardly ever gives you anything worth the time spent farming.
Why is that? Because the odds are stacked against you. Grievouz & 3 friends tested the numbers, the results are:

But wait! There’s another way to farm Engrams through a Story Mission…

Alternate Farming Method: Find out where to farm Engrams in Destiny on SOLO.
– Requirements: You need to have at least a level 6 or higher character. Before launching the Mission you’re given the choice between an easy Level 6 challenge up to much harder levels up to level 20 or 28, setting it to easy means less enemies but much easier farming
– Location: On the Moon during the “Story Mission: The Dark Beyond”; Play from the starting area up to the Temple of Crota area, when you have to deploy Ghost to see if he can revive the lost Guardian in a cutscene. After this, the farming starts.
You can kill all Hive enemies here except for the Knight, because the Knight triggers the checkpoint!
– How To Do It: After the Ghost cutscene at the Temple of Crota, a “Resist the Hive” message appears on-screen as Hive enemies start to rush you. Kill them all, but not the Knight, as he triggers the next checkpoint. After the 2 to 3 minute run is over and you killed everyone except for the Knight and then get killed yourself. As a result of your death you’ll be placed back into the game from before the Hive enemies attack with all your Engrams still on the floor. You can kill them again & again using this method and in 30 minutes time you can randomly get something like: 17 Green Items, 5 Blue Engrams, and 1 Legendary Engram. As shown here…

I hope these tips will you help you farm lots of Rare & Legendary Engrams.

Please check out our other “How To” guides atop this page to enjoy Destiny more! 😀

Thanks to Completionist, Typical Gamer, 360GameTV, Grievouz & John for the discovery, guide videos and tips.

Please comment if you have any additional Destiny Engram Farming location tips of your own, we’ll give you credit for it. – Thanks for visiting!