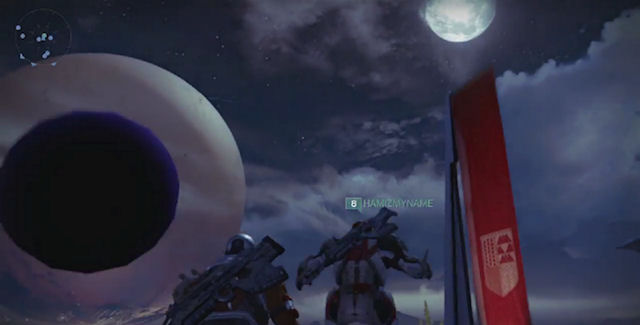 Let’s take a look at some fun Destiny easter eggs! They can be found if you know where to look! 🙂

Easter eggs have been confirmed for Destiny. Watch footage of them all below.

During the “Cerberus Vae III” Strike Mission on Mars, there’s a building that looks a lot like Master Chief’s helmet! Coincidence or not?

In the Tower area you’ll be able to find anti-gravity and soccer balls hiding around the place. You can kick them around and play games with your friends.

This video shows the secret spawn locations for the soccer balls (3) and anti-gravity balls (2) in Destiny:

At the Tower front desk area there’s a giant fan on top of the Special Orders Postmaster office.

One player can do a double jump on top of the office, and another player can walk up the nearby stairs and once upstairs take a left to the corner of the platform that looks out onto the office… once there, go stand near the railing to find an “Activate Fan” button command to turn on the giant fan to blow the other player up high in the air!

At 1:25 minutes into this video you’ll see where to turn on the wind fan:

Ok so technically this next easter egg isn’t from Destiny, but another Bungie game. But it was too cool pass over.

In this amazing episode of “The Easter Egg Hunter”, we’re taken back to five years ago in 2009, when Halo 3: ODST was released to the world. Unbeknownst to us back then, it contained an easter egg poster that reads “Destiny Awaits” along with a picture of Earth with the Traveler next to it! Clearly a nod at Bungie’s now-released game.

It’s real! Take a look at it in this video:

Supposedly there’s a Marathon reference in Destiny as well. While unconfirmed, it’s said the only Exotic ship in Destiny is named after a ship from the 1994 FPS game Marathon.

Some people are saying that on Venus, where you infiltrate an ancient data center, you’re greeted by the voice of an A.I. who sounds a lot like Cortana from the Halo series.

Have you found any Destiny easter eggs?