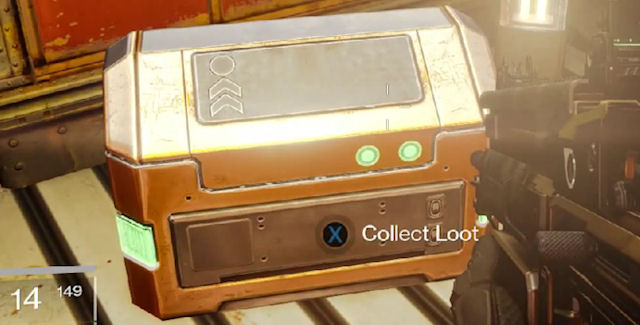 Finding all 20 Golden Chest locations on Earth, Moon, Venus & Mars; and picking them up will help unlock valuable loot. From Earth you get an Upgraded Sparrow, Moon is Armor, Venus is a Rare Helmet, and Mars is a level 12 LMG.

The Timeline for all these in-game Golden Chests locations is listed below.

How to find missing Golden Chests?: In-game the Golden Chests will appear simply as golden colored loot chests with bright green lights on them (so you can better spot them from a distance) that you can open up to collect what’s inside by standing next to it, at which point the on-screen text prompt will tell you that you can press and hold the action button to “Collect Loot”.

Where to find all Golden Chests in Destiny? The in-game collectibles locations for the Golden Chests are described by Joel in this detailed video guide.

The Golden Chests are listed in the video in the order that they appear.

Timeline in Minutes for the Golden Chests Locations Guide Video: 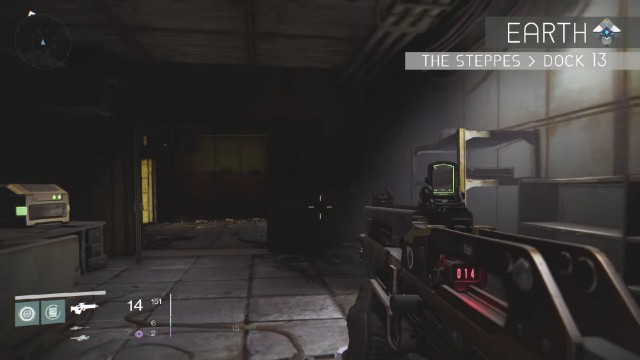 Where To Find: From the Steppes, enter the building that leads to Dock 13 and move into the next room. A Gold Chest rests in plain view atop a desk. 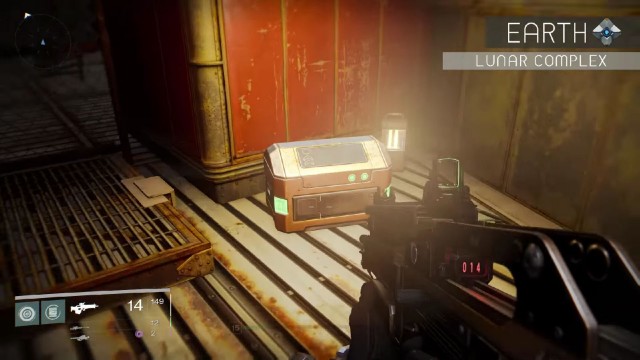 Where To Find: During the confrontation with the Hive and the Wizard from “The Dark Within” Story mission. When entering the final room with the Wizard, jump on the roof of the room to the left. Towards the back near the red wall is a Gold Chest, sitting next to a bright white lamp. 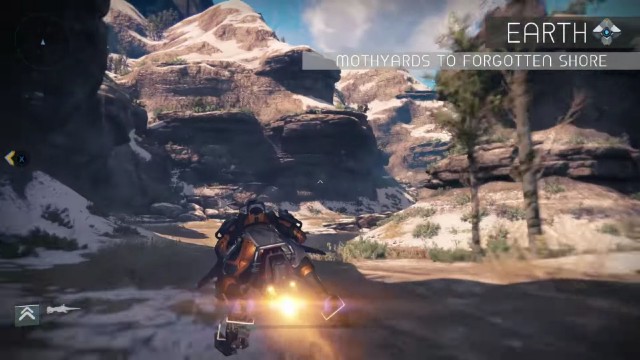 Where To Find: It’s available after you first receive your Sparrow. Enter the path to Forgotten shores from Mothyards, and follow it as it curves. After a few bends and crossing the small river, look to your left for a cave with water flowing over the entrance. Make your way inside and to the left to collect a Gold Chest. 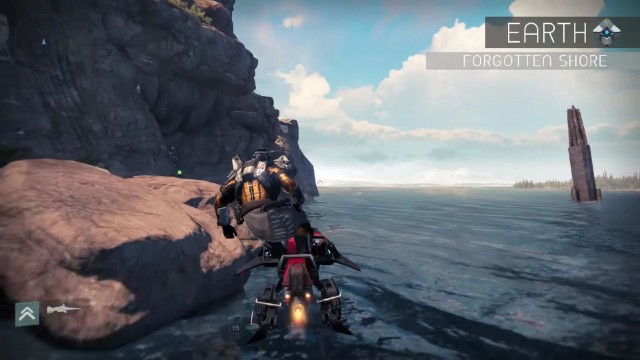 Where To Find: As you’re entering Forgotten Shore continue following the small river, while riding your Sparrow from where you found the prior Gold Chest. It will lead you out to a large mass of water. Continue along the cliffside (out on the water keep to the left) to find a Gold Chest resting among the rocks. Jump off your Sparrow to open it for the precious loot inside. 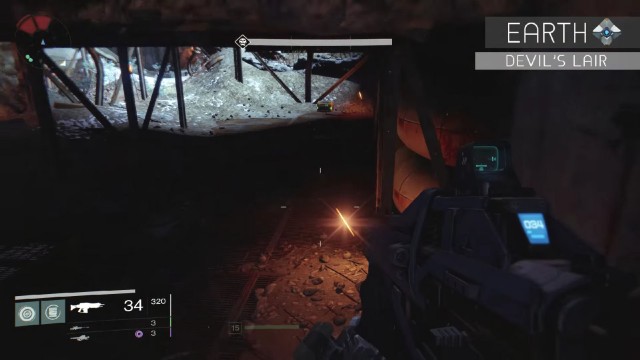 Where To Find: Only accessible during the Devil’s Lair Strike. From the entrance to the Boss room with the many human bones & skulls lying around — in the darkness zone, when you get the “Decimate The Fallen” objective — turn right and follow the staircase down. At the bottom floor you will see the Gold Chest in plain view.

Gold Chest Location 6 on The Moon 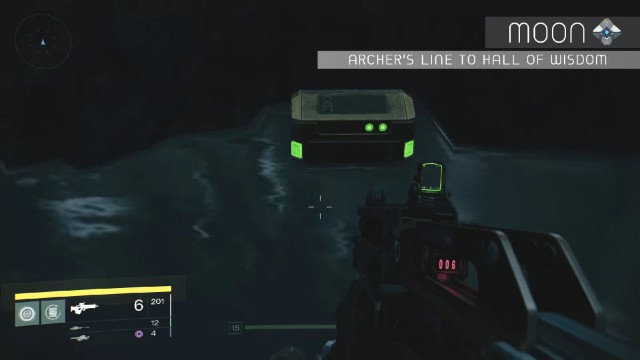 Gold Chest Location 7 on the Moon, Hall of Wisdom

Where To Find: From the starting point in Archer’s Line, head to the right and climb up the hill to the north. Look for a Dome shaped building. Enter the dome and exit out the back. Head down into the Hive fortress. Continue down the spiral path until you reach the bottom. Enter the water to the right of the entrance to the Hall of Wisdom. There is a small cave in which you enter then turn around to collect the Gold Chest, which is seen with water flowing past it.

Gold Chest Location 7 on The Moon 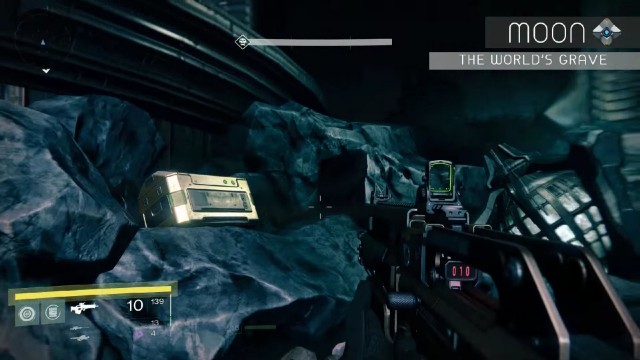 Gold Chest Location 7 on the Moon, The World’s Grave

Where To Find: Only accessible during the mission The World’s Grave. After acquiring the key from a Hive Knight continue to the mission objective and the final room. Drop in shallow water and turn to the left. Perched on the rocky wall is a Gold Chest, next to the giant round white light chandelier that’s fallen down.

Gold Chest Location 8 on The Moon 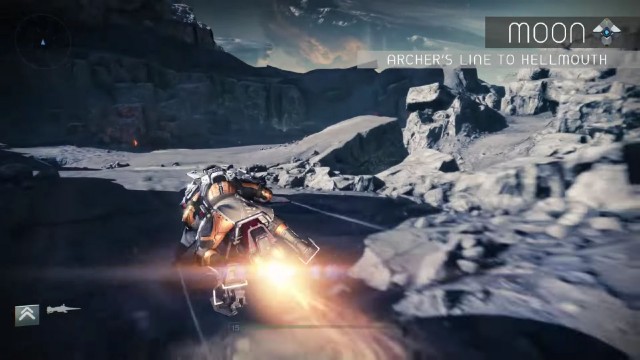 Gold Chest Location 9 on The Moon 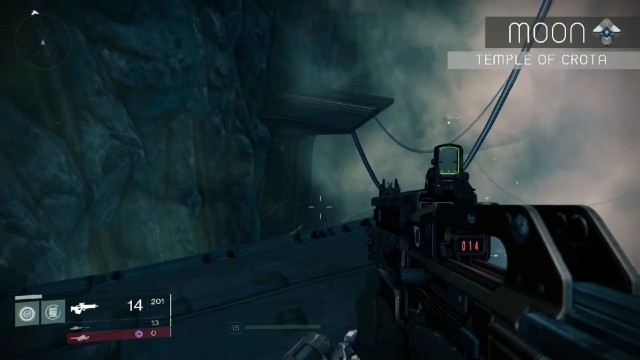 Gold Chest Location 9 on the Moon, Temple of Crota

Where To Find: After entering into the Temple of Crota (at the end of the first mission on the Moon), immediately go left and take the staircase to the bottom floor and then walk forward until on your left you see a walkway to cross. Here’s an alien ship in the middle with nothing around it, so walk off the walkway-platform and onto the ship. Go straight ahead and jump down on another platform. Don’t continue ahead onto the path, but stay on this platform that sticks out with a deadly chasm below it. Look to your right to find multiple platforms you can jump down on until you reach the 3rd platform with a Golden Chest to open. – Don’t worry you’ll be able to jump back up on the platforms above to get back up there again.
Bonus: Upon opening the Gold Chest you receive the Jade Rabbit Insignia.

Gold Chest Location 10 on The Moon 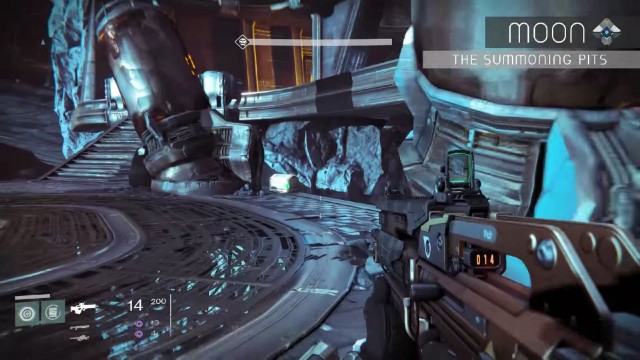 Gold Chest Location 10 on the Moon, The Summoning Pits

Where To Find: Once you get to the Phogoth the Untamed Hive boss area in The Summoning Pits, take a left when you enter the door to the area (where you see him for the first time) and go all the way left. Keep going left to the bottom circular platform with the Gold Chest in the corner to your left (between the two staircases). 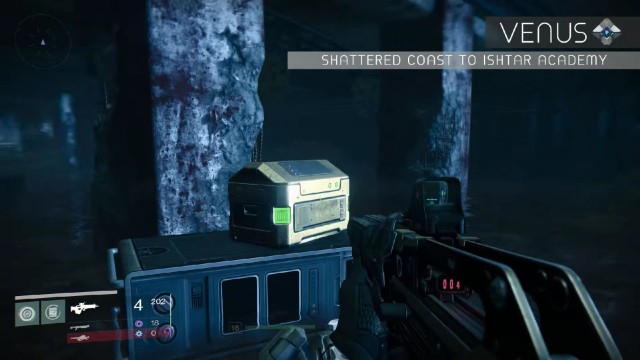 Where To Find: During the first story mission on Venus, called A Stranger’s Call. From the Shattered Coast take the tunnel to the Ishtar Academy. Go into the large hole that’s the entrance to the tunnel there. Once inside the tunnel, as you wade through the shallow water, look for the large pillar and behind it you’ll find the Gold Chest on top of a silver crate. 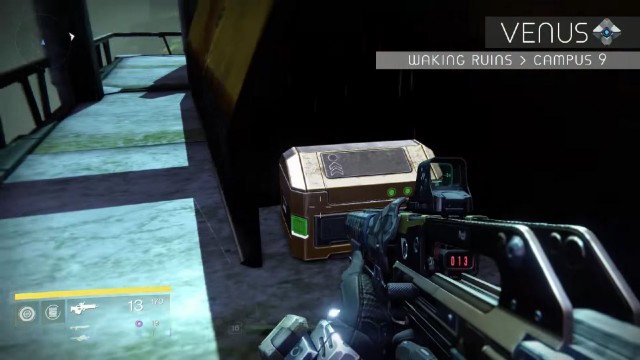 Where To Find: During the level 11 second story mission on Venus, called Ishtar Collective. Once you reach the last area of this mission, you should go from the Waking Ruins into Campus 9. Look for the gold-paneled building next to the waterfall. Go to the backside of the building and keep walking the back side path until you can turn a short corner to find the Gold Chest hiding out of sight. 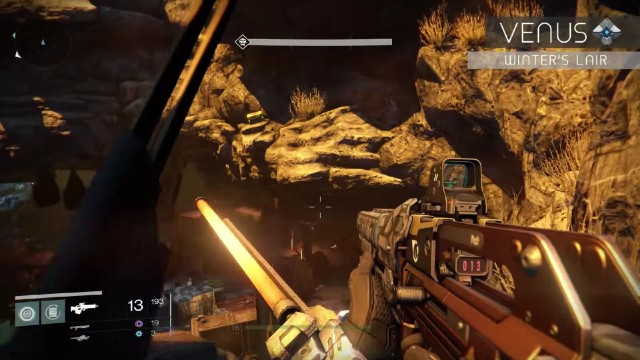 Where To Find: During the level 12 third story mission on Venus, called Scourge of Winter. Once you get inside Winter’s Lair, follow the looooong path all the way up to the upper area (just keep hugging the sides of the cavern) and you’ll end up on a cliff with an orange glowing pole sticking out at the end. Look straight forward to the rock platform on the opposite end of the cliff to see the Gold Chest waiting for you. I think I just heard it calling out to you “Please hug me, come open me! My gold loot tastes better than that silver cr*p!” Ahum, working on this for hours sometimes gets boring okay, anyway let’s continue… From the tip of the glowing pole make a double-jump straight forward towards the Gold Chest.

Where To Find: During the same level 12 third story mission on Venus, called Scourge of Winter. After Winter’s Lair, when you reach The Cinders and your objective is to “Track The Archon Priest”, you’ll find a giant ship waiting at the cliff. As you go towards it, you’ll pass over a ship deck first, go to the right side and at the back & lower side of the ship deck you’ll find the Gold Chest. 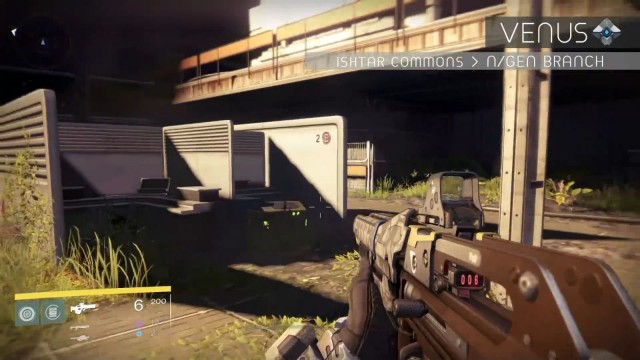 Where To Find: During the level 14 fourth story mission on Venus, called The Nexus. As you move from the Ishtar Commons into N/Gen Branch, once inside turn right. Go up the stairs into a work room with cubicles. Look for the two cubicles with desks in the back and hiding behind the far-most desk you’ll find the Gold Chest. 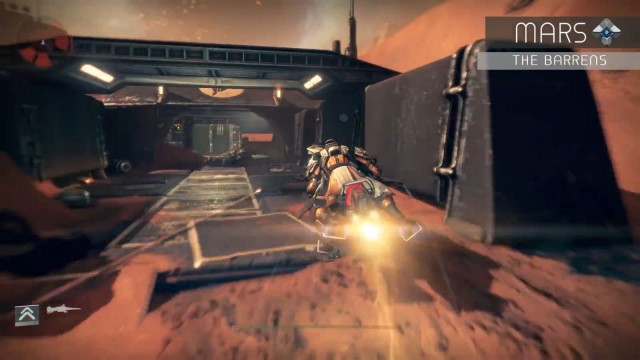 Where To Find: Starting from The Barrens landing zone, head over to the round Cabal outpost near the Scablands exit. There on top of a stack of crates you’ll find the Gold Chest. 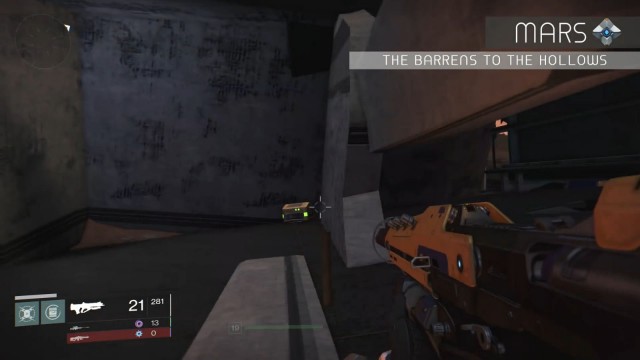 Where To Find: As you travel from The Barrens to The Hollows through the tunnel, there’s a small opening above right before you reach downtown. Go down the hole and turn right to see the Gold Chest. 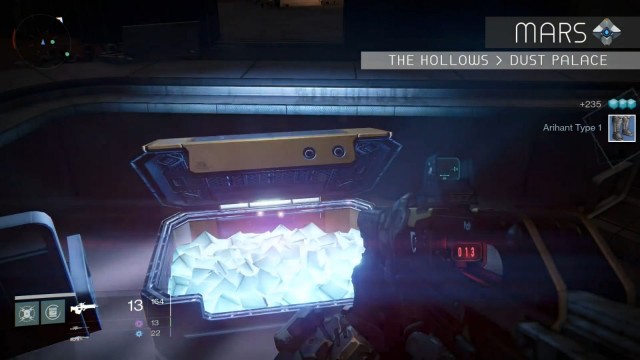 Where To Find: Make your way from The Hollows to the Dust Palace, go inside the palace to find door number 3. It’s where in the Dust Palace Strike the first door gets opened. It’s shrouded by darkness, but look behind the reception desk to find the glowing Golden Chest. 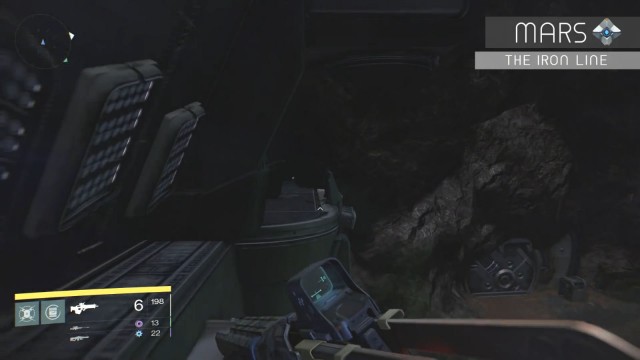 Where To Find: Go inside Iron Line. Head towards the large gate leading to the Legion’s Keep, and stick to the left walkway. Then jump onto the big pipes in the corner and turn around. Next, you’ll need to jump up to the walkway on the left side and walk all the way to the other side. Once there, you’ll need to look in the corner to see the Gold Chest.
Bonus: This 4th Gold Chest on Mars always gives you a Strange Coin. Use it to buy Exotic gear with from the Xur vendor on weekends in the Tower. 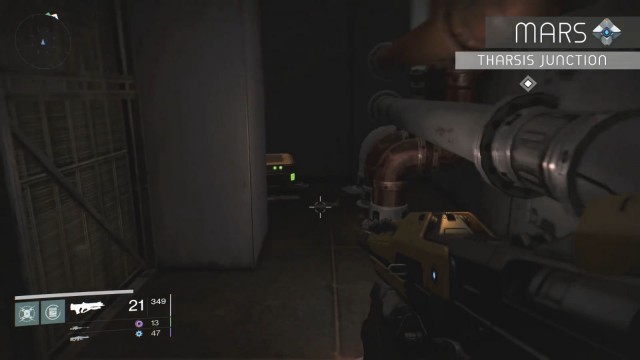 Where To Find: During the level 17 story mission on Venus, called Rising Tide. Head inside the Tharsis Junction subway. Find the Vex Gate in the corner behind the train cars. Look behind there to find a small room to enter. Once inside there, you’ll follow the fence to find out what it’s blocking off, at the far-end corner of the room you can get behind the fence to find the last Golden Chest!

There you go! All Golden Chests in Destiny are yours! 🙂

Huge thanks to GamingSinceGaming for the guide video and tips.

Please comment if you have any additional Destiny Golden Chests location tips of your own, we’ll give you credit for it. – Thanks for visiting!