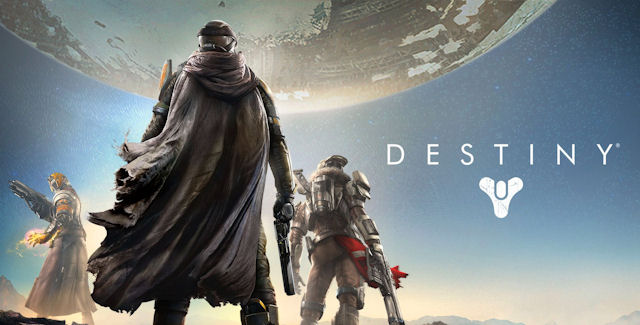 Welcome Guardians! Our Destiny walkthrough will guide you through the beginning to ending moments of gameplay with strategy tips for this open world Action-RPG FPS game on the PS3, PS4, Xbox 360 & Xbox One.

Everything changed with the arrival of the Traveler. It sparked a Golden Age when our civilization spanned our solar system, but it didn’t last. Something hit us, knocked us down. The survivors built a city beneath the Traveler, and have begun to explore our old worlds, only to find them filled with deadly foes. You are a Guardian of the last safe city on Earth, able to wield incredible power. Defend the City. Defeat our enemies. Reclaim all that we have lost. Be brave.

Let’s start the Destiny walkthrough with an introduction video!

Please note that viewers must be at least 16 to watch, so no harm comes to those with innocent eyes. This game includes Animated Blood, Violence.

From the Creators of Halo and the company that brought you Call of Duty. In Destiny you are a Guardian of the last city on Earth, able to wield incredible power. Explore the ancient ruins of our solar system, from the red dunes of Mars to the lush jungles of Venus. Defeat Earth’s enemies. Reclaim all that we have lost. Become legend.

20 GB hard drive storage (or its equivalent) is required. Additional storage may be required for some updates and features. Storage requirements subject to change.

Broadband internet required. Users are responsible for broadband access and usage fees. Additional charges can apply for online content. There may be mandatory in-game updates which users must download to continue playing. Some in-game updates are only available to users who pay to unlock.

Welcome to the epic Destiny walkthrough!

Doug & Nick will be your voice-over commentators, they will mostly be showing you around the game’s Story Missions.

The Divide Objective: Search the area for the ship to escape the Cosmodrome.

Mission 2: Restoration & Mission 3: The Dark Within

Old Russia, Earth Objective 3: [timestamp 04:00] Break the House of Devils’ grasp on the Cosmodrome and secure a vital link to the Golden Age. — You’ll also be able to sync to the vehicle grid to summon your Sparrow for quick transport around the area towards the Forgotten Shore.

Let’s take a break from Story Missions and level up. In The Crucible you can hone your skills and win glory in battle against other Guardians.

Here’s the first PVP match with others. It’s on the “Rusted Lands” map in Eastern Flood Zone, Earth.

Old Russia, Earth Objective 4: Track down codes to raise an ancient Array and connect it to long-lost colonies throughout the solar system. – Your first task at hand will be to search the Skywatch yards for the Ghosts holding the codes to open the array.

Destiny Walkthrough continues on Page 2 with Story Mission 6: The Dark Beyond.