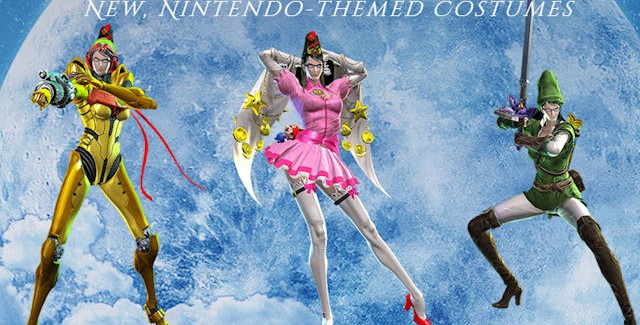 The Bayonetta 2 release date is October 24, 2014 in the USA and Europe, with both regions getting the highly-anticipated Platinum Games action title on the same Friday. The action game is coming exclusively for Wii U and includes Bayonetta 1 for free on retail disc copies titled “Bayonetta 2: First Print Edition”!

Much more information on Bayonetta 2 will be revealed during an exclusive Bayonetta 2 Nintendo Direct, which will be streamed online at nintendo.com/nintendo-direct today, October 4th, 2014 at 3pm Pacific Standard Time (US). Watch the live stream below…

“Bayonetta is back to bewitch the Wii U console, skewering angels with her dazzling moves. Unleash her inner demons with wicked weapons and an expansive combat system, and see if you’ve got what it takes to get a Pure Platinum medal.

Exclusive to the Wii U version, Bayonetta now cosplays in Princess Peach, Samus and Link-inspired outfits (shown in the photo at the top of the page), complete with other Nintendo-inspired details! Even Bowser makes an appearance, and Mario Coin’s or Zelda Rupees spray out of enemies! You can even use the Master Sword when cosplaying as Link!

Packed-in with the purchase of every retail hardcopy version of Bayonetta 2 is the full game of the original Babyonetta 1 (released in 2010 for Xbox 360 & PS3)! However digital purchases won’t include both games. Instead the Nintendo eShop Bayonetta 2 purchase will include an automatic discount on the other game; either Bayonetta 1 or Bayonetta 2 depending on which one you bought.

* Punish those who stand before you with guns, a sword, a whip and devastating summons in this critically acclaimed, stylized action game.
* Dodge oncoming attacks at the last possible moment to slow down their movements with Witch Time and get the upper hand on your foes. Shoot, shred and blast your way to the highest score, finding more weapons along the way.
* Bayonetta’s take on costumes inspired by Nintendo characters add to the mayhem—for example, banish “evil” with the Master Sword and deflect attacks with a Hylian shield! Then pick up Rupees dropped by your foes and hear a jingle from The Legend of Zelda as you solve puzzles!

Are you excited for Bayonetta 2 to release?