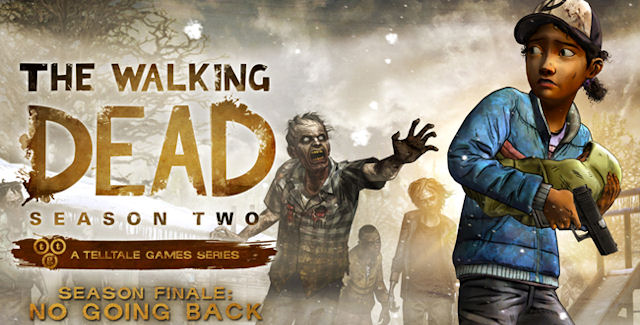 Our The Walking Dead Game: Season 2 Episode 5 walkthrough will guide you through the beginning to ending moments of gameplay with strategy tips for this survival-horror graphic adventure on the PC, Mac, Xbox 360, Xbox One, PS3, PS4, PS Vita & iOS devices.

Telltale Games is back for Season 2! This fifth part is called “The Walking Dead: Season 2 – Episode 5: No Going Back”. In the aftermath of the shootout at the end of Episode 4, the group’s surviving members must navigate through a brutal snowstorm in order to reach the Wellington safe haven and ensure the safety of Rebecca’s baby.

Also check out the Episode 5: No Going Back “My Clementine” Flashback Trailer that shows a new memory of young Clementine, it begins at 3:43 minutes into this next video.

Welcome to the The Walking Dead Game: Season 2 Episode 5 walkthrough! Doug will be your voice-over commentator showing you around the game’s areas.

Chapter 1 Description: You made it out of the shootout alive, but Winter is setting in. Time to find food and shelter is running out. And with a newborn infant to sustain, walkers are a greater threat than ever. As pressure builds and tensions reach breaking point, your choices will decide Clementine’s fate in the gripping conclusion of The Walking Dead: Season Two.

Episode 5 starts off from the moment Clementine gets caught up in the shootout between the two groups.

Are you ready to change Kenny’s eyepatch bandages? It’s gonna be gross!

Chapter 4 Description: [Timestamp 6:36] Reach the other side of the frozen lake.

Chapter 5: All the Dark Night

Note: Rebecca & Alvin’s baby boy Alvin Junior will from here on out be nicknamed AJ.

Chapter 5 Description: Made it through to morning without freezing from the cold lake water. Then help Kenny fix the truck at the house.

Chapter 7: Kindly Stop for Me & All the Dead Lie Down Ending

Chapter 7 Description: After you found your way through, you must reach the Wellington safe camp in the cold North.

This is 1 of 5 different endings to “The Walking Dead Game: Season 2 – Episode 5: No Going Back”. To watch the other 4 endings, go to Page 2 (the red button is below).

Please check back with us in early 2015 for the next part and stay up to date in our “The Walking Dead Game: Season 3 release date” discussion page.

The Walking Dead Game: Season 2 Episode 5 Walkthrough continues on Page 2 by showing the alternate choices you can make in this episode.