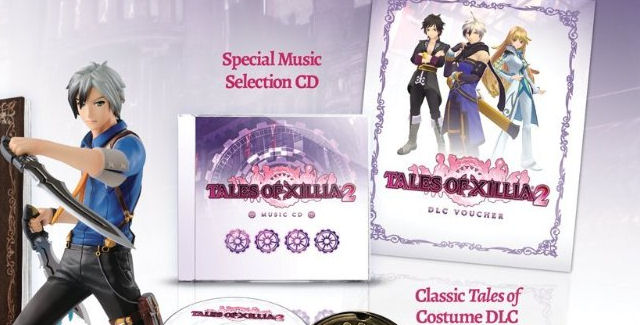 Index of Tales of Xillia 2 Guides:

• In America & Canada: Only buying the “Tales of Xillia 2 – Collector’s Edition” will give you a download code for the Classic Tales of Costume DLC.

You can check out what else is in the CE’s on our “Tales of Xillia 2 Collector’s Editions” page.

How To Unlock The Jacket-off Outfits

After you get down to 17.5 million Gald, you’ll get Alvin’s jacket off costume, jacket off hair style, and Alvin’s hat. Most other bonuses in between will be skills for Gaius, Musee, and Milla who they join the group last.

Location where to pick up the Outfits: You have to have to go back to the Triglav Hotel. After you enter the building it will be on the first floor to your right hand side. Then from the mail slot you will be able to get the jacket and all the other stuff you have been rewarded with because you have been paying off your debt.

How To Unseal Cameo Weapons

Find out how to unseal Cameo Weapons: First you must finish the game to the end. After that’s done, go to the Nor Fire Cavern and talk to a secret weapon shop seller there. The shop unlocks a lot of weapons for you to craft, including the unsealed Cameo Weapons. After visiting that shop once, you can craft the Cameo Weapons from anywhere. Good luck unsealing them.

Do you know of any Tales of Xillia 2 cheats or unlockables?
Let us know in the comments, you’ll get credit for finding out. – Thanks for visiting!