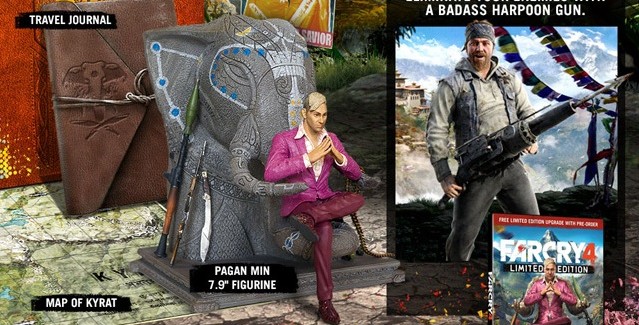 Priced at $130, the Far Cry 4 Kyrat Collector’s Edition has been announced for Ubisoft’s upcoming open-world FPS sequel that hits stores on November 28th for PS4, PS3, Xbox One, Xbox 360 and PC.

Check out this Accolades Trailer for Far Cry 4.

Click on the image for a closer look at this Collector’s Edition: 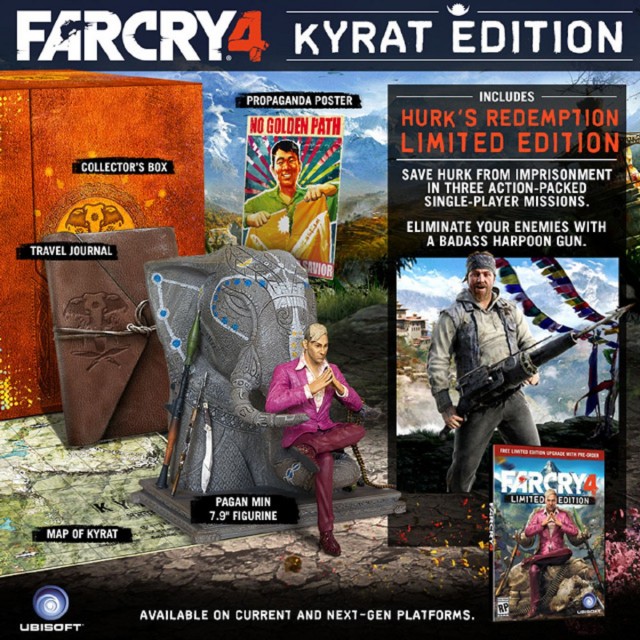 Now you can sit Pagan Min in your living room!

* Travel Journal – To “record your own adventures.”

* Map of the Expansive Open Game World of Kyrat

Check out the Far Cry 4 Journey to the Himilayas Part 1 Video.

Mission 2 (20 mins)
Fight waves of enemies while riding an unusual vehicle with Hurk by your side.

Mission 3 (20 mins)
In this epic bro-tastic conclusion, chase down an enemy convoy and save Hurk from certain death.

Exclusive Unlockable Weapon
You get an exclusive unlockable Harpoon Gun Weapon called “The Impaler”! Use this modified whale hunting Harpoon with a Unique Skin Pack to shoot harpoon stakes at your foes!

Here’s the Far Cry 4 Kyrat Edition image gallery.
Click on any of these image thumbnails to see the full-size photos: 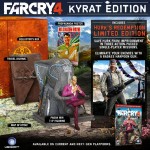 Now you can sit Pagan Min in your living room! 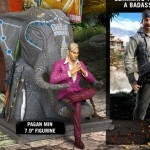 Far Cry 4 can be pre-ordered at GameStop in the United States, EB Games Australia in Aussie territory and Amazon.de in Europe.

If you pre-order Far Cry 4, you automatically get upgraded to the so-called “Limited Edition”, which includes the Hurk’s Redemption bonus missions and the harpoon gun as digital extras.

Glad to see Ubisoft offering a figurine for fans of the Far Cry franchise. I’m sad that a game of this epic scope doesn’t get a soundtrack or art book however, it seems like those would’ve be no-brainers for such a AAA title. I’ve also seen fans complain that there is no Steelbook included. Oh well.

Will you be picking up the Far Cry 4 Kyrat Collector’s Edition?