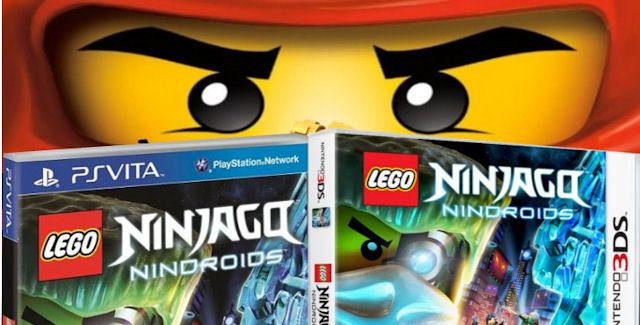 Our Lego Ninjago Nindroids walkthrough will guide you to 100% completion; get through the beginning to ending moments of gameplay with strategy tips for this action-adventure game on the 3DS & PS Vita.

You will have to protect New Ninjago City from the Overlord’s Nindroid army. The story will have you controlling Cole, Jay, Zane, Nya, Samurai X, PIXAL and more.

Please note that viewers must be at least 10 to watch, so no harm comes to those with innocent eyes. This game includes Cartoon Violence.

The highly popular LEGO Ninjago videogame franchise is back with high-kicking action and adventure! LEGO Ninjago: Nindroids comes to the Nintendo 3DS and PlayStation Vita this summer from July 29th, 2014.

Based on the first five new episodes of the LEGO Ninjago Rebooted animated TV series, “NINJAGO: Masters of Spinjitzu,” you’ll get to battle and defend the New Ninjago City where the Ninjas face a technological threat by the evil Overlord and his robotic army of Nindroids. Using swift combo attacks, unique fighting moves, special weapons and new vehicles, the Ninjas must fight with all their might to save Ninjago.

You must battle through more than 30 exciting levels with cool vehicles, signature weapons and the new Technoblades, all the while joining in on missions to help save the city.

You may recognise some of your favourite LEGO building sets (like the Tech Wu, infiltrate Borg Tower, enter the Digiverse) as you gear up as Samurai X, shoot down enemies in Zane’s Ninjacopter, dodge missiles in the Kai Fighter, pilot Jay’s Thunder Raider, smash up the streets in Cole’s Earth Mech and tear through the forest on Lloyd’s Golden Cycle.

The Key Game Features Are:

“Adding LEGO Ninjago: Nindroids to our popular LEGO Ninjago franchise is very exciting,” said Tom Stone, Managing Director at TT Games. He continued: “Hellbent Games has delivered the action game Ninjago fans have been waiting for – with all the characters, comedy and thrills that make the franchise such a success.” He added: “Young gamers will have loads of fun playing as their favourite Ninja, and we’re introducing new characters and new villains – it’s the ultimate Ninja action game for kids.”

The Character Powers Are:

Welcome to the Lego Ninjago Nindroids walkthrough! The heroes of LEGO Ninjago are ready to battle!

Packattack will be your guide showing you around the game’s levels. This will be a 100% walkthrough for the game.

This first part includes the introduction as well as the first 3 levels in the game; Level 1-3.

Tip: Level Select can be found at Mr. Noodles’ shop in the Ninjago City Hub. You’ll also get hints and tips from the Noodle Bar owner.

This second part covers the next 3 levels in the game; Level 4-6.

Things to do in the City Hub: Outside of the intense combat in levels, you can visit the New Ninjago City Hub, that’s home to…

1. Doomsday Comix shop for buying unlockable characters and red bricks that unlock cheats,
2. Plus Grand Sensei Dareth’s Mojo Dojo for training challenges,
3. As well as Mr. Noodle’s Noodle Bar for the level select options.
4. The inhabitants of the City Hub’s around 3 streets, there are characters walking around and enemies will keep on attacking you.
5. There are a lot of blocked areas that you’ll unlock as you progress through the main game’s levels.

This third part covers the next 2 levels in the game; Level 7-8.

This fourth part covers the next 3 levels in the game; Level 9-11.

Here the Golden Ninja (Llyod) will make his first appearance.