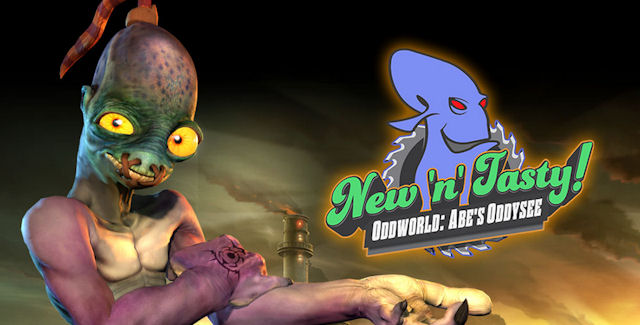 The Oddworld: New N Tasty walkthrough will guide you through the beginning to ending moments of gameplay with strategy tips for this platformer game on the PS4, PS3, PS Vita, PC, Mac, Linux, Xbox One & Wii U.

Abe’s back, and the original hero’s about to face his oddest challenge yet! Here’s a brand new Oddworld game based on Abe’s Oddysee with stunning next-gen 3-D visuals.

Please note that viewers must be at least 13 to watch, so no harm comes to those with innocent eyes. This game includes Violence, Blood, Language, Crude Humor, Use of Tobacco.

A mudokon chosen by the fickle finger of fate, Abe was a first class Floor-Waxer for RuptureFarms who was catapulted into a life of adventure. Late one night he overheard plans from his boss, Molluck the Glukkon, to turn Abe and his fellow Mudokons into Tasty Treats as a final effort to rescue Molluck’s failing meatpacking empire!

Can Abe change the fate of thousands and rescue the Mudokons? Can he escape the dark recesses of RuptureFarms and the desolate, uninviting, and downright terrifying surrounding environment? Lead our unlikely hero on his mission because if he doesn’t make it… Abe’s back on the menu!

Oddworld: New ‘n’ Tasty is a ground-up remake of 1997?s Oddworld: Abe’s Oddysee. While it follows the same story as the original game, it has all-new graphics, all-new sound and all-new controls, while maintaining the same classic gameplay as before.

Why is it called New ‘n’ Tasty?

In-game promotional signs for the next ‘tasty treat’ in Abe’s Oddysee were labelled New ‘n’ Tasty. We ran a community poll to name the game (it was previously called Abe HD) and New ‘n’ Tasty was the runaway winner.

What’s the aim of the game?

Lead character Abe is a lowly floor waxer at RuptureFarms, a large meat-processing factory on Oddworld. One day he discovers his kin are next on the menu, with a range of novelty meat products to be made from the race of Mudokons.

His initial goal is to escape the factory, but his destiny soon becomes much more important, and he’s charged with not only returning to RuptureFarms to bring the factory down, but also with rescuing the other Mudokons.

The ultimate goal is to finish the single player storyline and bring down RuptureFarms from within. Completionists will want to rescue every fellow Mudokon along the way, which will involve seeking out secret areas and completing optional puzzles.

Will the game be as difficult as Oddysee?

Oddysee was a tough game, so we’ve tried to make New ‘n’ Tasty playable by a wider range of gamers. We’ve done this by introducing difficulty levels, and whilst we’d recommend that most players opt for Normal on their first run, seasoned Oddworld fans would be most familiar with Hard, where bullets, teeth and steel are at their deadliest. In all difficulties, there are more generous checkpoints too.

What happened to the flip-screen format from Oddysee?

Oddworld: New ‘n’ Tasty features a dynamic, intelligent new free-flowing camera and larger, distinct level areas which enable us to ensure that Abe is always the focus without interruption. It zooms in and out when required for gameplay purposes and drama, and pans to the left and right when needed.As a result of the new scrolling levels, some of the level design and puzzles from Oddysee have been reworked. And as enemy AI is now much richer and more emergent, the game feels more alive.

What resolution does the game run at?

On PlayStation 4 the game runs at a native 1080p resolution.

Have you re-done the cut-scenes?

Yes, everything in New ‘n’ Tasty has been redone from scratch, including the in-game cut-scenes, some of which have been re-directed. There are even a couple of brand new cut-scenes.

Does the game support 5.1 surround sound?

Does the original music make a comeback?

We’ve remastered, reproduced and in some cases re-recorded the music, but it’s all true to the original Oddworld: Abe’s Oddysee style. It builds and changes as in-game events happen, too.

What about the voices?

We’ve re-recorded the vast majority of voices. Mudokons now have a much greater scope in terms of ambient conversation and replies, and also feature the amazing talents of our community fans – and a handful of celebrities!

How can I buy the game?

New ‘n’ Tasty will only be available as a digital download.

Does the game feature leaderboards?

It does – players will be able to face off against friends and the rest of the world via a series of overall and per-level PSN leaderboards. Compete for times and the number of Mudokons saved.

What are the controls in New ‘n’ Tasty?

• How do the controls work in New ‘n’ Tasty?
New ‘n’ Tasty uses an analog movement system, so that the left stick on the PlayStation 4 controller allows Abe to move slowly, walk and run, sneak when the L1 button is held, and roll when Abe is crouched. Cross is jump; Square is use and enter doors and Circle is crouch. Tapping Triangle shows you Abe’s remaining health.Holding L2 and R2 makes Abe chant, which is used to open portals to save Mudokons, and possess Sligs.

• How does GameSpeak work?
Gamespeak is controlled via the PlayStation 4 controller’s D-Pad. Up is “Hello”, Right is “Follow Me”, Down is “Wait” and – from Exoddus – Left is “All O’Ya” which makes speaking to more than one Mudokon much easier.If players hold down R2, the D-pad doubles up for the second set of GameSpeak actions, such as laughs, whistles and – yes – farts.

• Can you QuickSave now?
Yes. Although there’re options on the Pause menu to do this (just tap the OPTION button) if you press the DualShock 4 Touchpad in for a second it’ll QuickSave, and if you hold it in for 2 seconds it’ll load your last QuickSave.

Welcome to the Oddworld: New N Tasty walkthrough! Shirrako will be your guide showing you around the game’s levels on Normal Mode.

Important: If you’re looking to find all 299 Mudokons in a speedrun, go to our “Oddworld: New N Tasty Mudokons Locations Guide” page.

Tip: You can press down on the Directional-Pad to say “Hi all” to get the attention of every Mudokon on-screen at once.