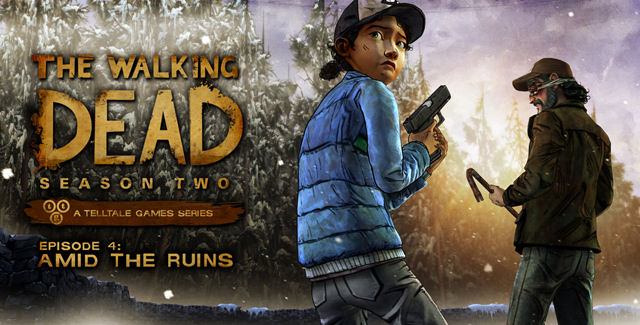 Our The Walking Dead Game: Season 2 Episode 4 walkthrough will guide you through the beginning to ending moments of gameplay with strategy tips for this survival-horror graphic adventure on the PC, Mac, Xbox 360, Xbox One, PS3, PS4, PS Vita & iOS devices.

Telltale Games is back for Season 2! This fourth part is called “The Walking Dead: Season 2 – Episode 4: Amid the Ruins”. After managing to escape from Carver’s clutches, the group continues their journey to survive while Clementine is forced to make tough decisions about who she allies with.

Welcome to the The Walking Dead Game: Season 2 Episode 4 walkthrough! Doug will be your voice-over commentator showing you around the game’s areas.

Chapter 1 Description: Free of their brutal captor, the group resumes their journey north. But hunger, violence and death have taken their toll. Simmering conflicts and inevitable changes within the group remind Clementine that danger can come from within, as well as without; she must choose her allies carefully in this penultimate episode of The Walking Dead Season 2.

Episode 4 starts off from when Clementine got separated from the group.

Chapter 6: All Fall Down

Chapter 7: On Foot & Beyond the Trees Ending

Chapter 7 Description: After the zombie attack, the group must get back on the road to the Wellington safe camp in the cold North.

This is ‘The End’ of “The Walking Dead Game: Season 2 – Episode 4: Amid the Ruins”.
Please check back with us in September 2014 for the next part and stay up to date in our “Episode 5: No Going Back release date” discussion page.

The Walking Dead Game: Season 2 Episode 4 Walkthrough continues on Page 2 by showing the alternate choices you can make in this episode.