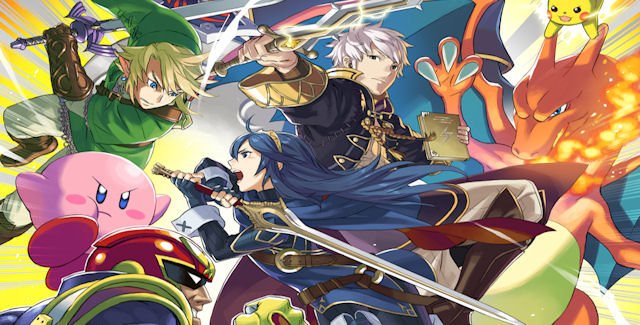 “WARNING! NEW CHALLENGERS APPROACHING!”
Find out who they are in the latest Super Smash Bros. Wii U & 3DS reveal trailer:

“By Book, Blade, and Crest of Flame”

• Captain Falcon — a long-time fighter from the F-Zero racing series — makes a welcome return to the 4th game in the Smash Bros. series. He has been a playable character in every game in the series so far.

• Lucina is a newcomer to the lineup. She joins the game from the Fire Emblem Awakening strategy RPG.

• Robin is another new challenger to the Smash Bros. series, meaning there are already 11 newcomers in total in the game so far. (S)he also joins the game from the Fire Emblem Awakening strategy RPG. (S)he is playable as either a male or female Robin, similar to Wii Fit Trainer and the Animal Crossing Villager.

• Chrom will not be a playable characters — there are already 4 Fire Emblem fighters anyway — but he will join in on the fight as an Assist Trophy, as shown in the announcement trailer above.

• Rayman from Ubisoft will mark the first time a third-party characters has been added to the Smash Bros. series as a Trophy. – Smash Bros. creator Masahiro Sakurai had this to say about Rayman on Miiverse: “In order to make Rayman’s trophy, we asked Ubisoft to share their references. We were expecting to receive 2D drawing references for Rayman, but to our surprise, they sent us data of a brand new 3D model that they rendered for this game!! And that was how this trophy was created. It takes a lot of work creating each model, so it’s wonderful that the creators contributed their own efforts!!”

So that dashes our hopes for Rayman becoming a playable character, with rumor suggesting Ubisoft’s request for Nintendo to make him playable was denied, hence why his new model was already modeled completely to fit Smash Bros. But maybe there’s hope yet he’ll be an Assist Trophy?

Do you like the new characters? Who else do you want joining the fight?