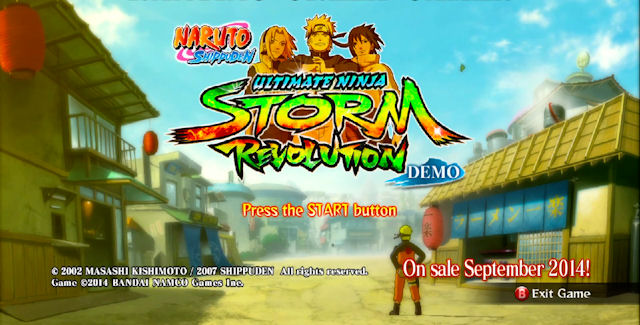 Here’s the Naruto Storm Revolution Demo walkthrough of the download that has been released on the PlayStation Network for PS3 and Xbox Live for Xbox 360 this week. It’ll be available to play until July 23, 2014! 🙂

Keep in mind that the Xbox date is for Xbox Live Gold members, if you’re a Silver member you’ll have to wait until July 9th.

Get ready for some fighting action coming your way on Xbox 360, PS3 & PC too, when it arrives the week of September 12, 2014. – Find all Naruto Storm Revolution release dates on that dedicated page.

For all the eager fans out there, the demo of Naruto Shippuden: Ultimate Ninja Storm Revolution is available starting now on the PlayStation Network and on the Xbox Games Marketplace!

• Offline Arcade Mode:
– Train your favorite character in the Arcade Mode! You can play as Naruto (Bijuu/Kurama Mode), Sasuke, Kakashi and Mecha-Naruto.

The Ultimate Jutsu of All Characters in the Demo:

How are you enjoying the Naruto Storm Revolution Demo demo?