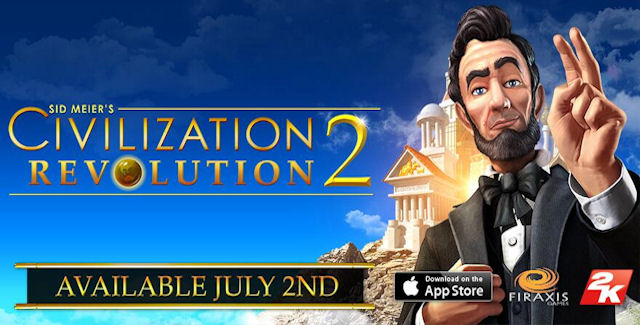 The Sid Meier’s Civilization Revolution 2 walkthrough will guide you through the gameplay with strategy tips for this turn-based strategy game on the iOS & Android.

This sequel to one of the most successful strategy games on mobile is here! Sid Meier’s Civilization Revolution 2 challenges you to build a glorious empire that will stand the test of time.

Let’s start the Civilization Revolution 2 walkthrough with an introduction video!

Please Note: Only compatible with iPhone 4S+, iPad 2+, iPad mini 1+, and iPod touch 5. The game will not run on earlier Apple devices! An Android version is promised to be coming soon!

This is the first game in the Civilization catalog to be developed and available exclusively for mobile devices. Civilization Revolution 2 offers mobile strategy fans a brand new 3D presentation and more tactical depth than ever before! Find out if you have what it takes to rule the world!

In this introduction video you can see the Tutorial of Civilization Revolution 2.

In this short tutorial your Domestic Advisor will teach you basic game controls such as production, movement, research, and combat. Your task is simple: Lay foundation to your Capital city with the Settler unit, then build a military unit, defeat a nearby Barbarian camp, and finally discover an Artifact.

Note: Civilization Revolution 2 Achievements and Artworks will not be unlocked in “Play A Scenario” or “Scenario Generator” modes.

Welcome to the Civilization Revolution 2 walkthrough!

Trophygamer will be your guide showing you around the game’s maps with winning strategies.

Tip: To avoid finishing Civilization Revolution 2 before seeing all possible modern technical advances, try aiming for a science victory instead of domination by war. That way you get to see everything all the way to the spaceship you have to build to win a science victory. Don’t take all the enemy capitals to avoid an accidental domination victory.

Unfortunately domination is relatively easy, so building up the kind of advantage you need for the other victory types often leads to you being powerful enough to get domination faster than the others. But since the game remembers which ones you’ve managed to do, there’s still an incentive.

In this second part of Civilization Revolution 2 playthrough you can see a lot battles going on.

The Live Events Page is where you can find new challenges, scenarios and events. Check back regularly for new events.

Description: “The Declaration of Independence has just been signed and the Revolutionary War is fully underway. Through domination victory, liberate America from British rule.”

This is what can happen when you first try a Live Event in Civilization Revolution 2. In this first Live Event you play as the Americans.

The Live Event #1 continues to its conclusion in this second video:

Thanks to 2K Games, Trophygamer & Danny for the walkthrough videos & tips.