How To Unlock All One Piece: Unlimited World Red Costumes 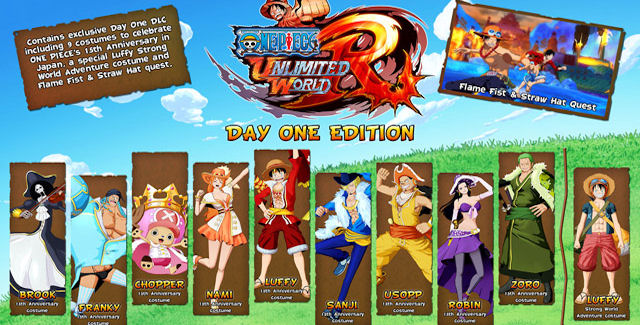 Below we’ve listed the secret costumes. Take the following steps to unlock each one, and soon all unlockable costumes in the game will be available to you. 😀

How To Unlock All One Piece: Unlimited World Red Costumes

As a free bonus for getting the “Day 1 Edition”** or “Straw Hat Edition” or for pre-ordering the One Piece: Unlimited World Red game at select retailers — GameStop/EB Games in America/Canada and GAME/Amazon in UK/Europe & Australia — and digitally on the PlayStation Store and Nintendo eShop, while supplies last you’ll receive the following 10 extra costumes.

• The One Piece: Unlimited World Red – Day One Edition features DLC to commemorate One Piece’s 15th anniversary in Japan. The Day One Edition will include special DLC for 10 costumes including: Luffy’s Strong World Adventure Outfit, 15th Anniversary Costumes for Luffy, Nami, Sanji, Chopper, Zoro, Usopp, Franky, Robin and Brook, and an extra quest.

The “Chopper Edition” Bandai Namco Games Europe created a special “Chopper Edition” exclusively for GAME only on PS3; It includes all the above listed DLC items, plus a Key Holder of Chopper, 10 stickers of the Straw Hat Crew members and the game logo, Wall scroll of Chopper, lanyard with Chopper, Artbook and the Takoyaki DLC Pack (3 costumes & 1 quest)!

Want all the costumes in one pack with more things to do? For all gamers waiting for the upcoming additional adventures of Luffy and his friends, a Season Pass will be available on the PlayStation Network (and maybe Nintendo eShop as well)! It includes 16 new missions and 13 costumes.

** To clarify, even if you didn’t pre-order the game or bought it on launch day, your game will likely still be the Day 1 Edition if it’s part of your store’s first shipments of the game. Only when they run out stock for those “Day 1 Edition” games, will the DLC code not be in the box (always ask to make sure it comes with your game).
Additionally, Bandai Namco has confirmed in a press release that this DLC item will not be sold separately later! Although it is once again included in the Season Pass.

How To Download: Go to either the PlayStation Store or Nintendo eShop and on the top right or left side you’ll see a redeem code or download code option, click on it and input the DLC code that came with your game.

How To Start Using It: Once you have redeemed your DLC code(s), start up the game and go to the character select screen to change your favorite characters into their new costumes.

Here’s a video highlighting how to unlock all costumes in the 15th Anniversary DLC Pack.
This footage was recorded on the character select screen and shows Luffy, Zoro, Nami, Usopp, Sanji, Chopper, Robin, Franky & Brook’s models and then later in the video they are all shown when used in fights.

All unlock requirements are listed for the Story Mode.

Thanks for the tips to Bandai Namco Games, Anime Games Online, Edouard, Nathan & Ealm528. Please share if you’ve found any other new costumes.

Have you gotten your favorite One Piece: Unlimited World Red costumes yet? Which are they?