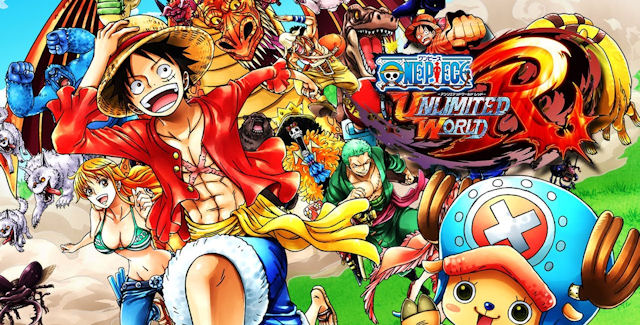 Our One Piece: Unlimited World Red walkthrough will guide you through the beginning to ending moments of gameplay with strategy tips for this hack ‘n slash action-adventure on the PS3, Wii U, PS Vita & 3DS.

One Piece Unlimited World Red is an action-adventure RPG game developed by Ganbarion, based on the widely popular and praised One Piece manga created by the renowned mangaka Eiichiro Oda.

Let’s start the One Piece: Unlimited World Red walkthrough with an introduction video!

Please note that viewers must be at least 12 to watch, so no harm comes to those with innocent eyes. This game includes Cartoon Violence, Comic Mischief, Mild Language, Suggestive Themes, Use of Tobacco.

A unique One Piece adventure to be enjoyed in co-op, with characters designed by Eiichiro Oda and a game-exclusive scenario!

The Straw Hat Pirates encounter and befriend a cheerful yet mysterious raccoon named Pato who possesses a shadowy power to create anything drawn onto a leaf. In order to help their new friend, the Straw Hat Pirates agree to assist Pato on an ambiguous mission “to meet someone;” Pato then leads the crew to the Forgotten Island where all the Straw Hat Pirates except Luffy are successively kidnapped by a wicked pirate named The Red Count, who had escaped the lower depths of Impel Down two years ago. With Pato’s help, Luffy must fight to recover his crew from the enemy’s grasp and find out exactly what The Red Count’s evil plots are…

One Piece fans will be playing as all of their favorite Straw Hat crew members and progress through the storyline where they will be challenged by famous boss battles such as Crocodile, Rob Lucci, Caesar Clown and many others! Mastering many skills will be mandatory in order to execute numerous flashy combos, to dodge or interact with enemies etc.! Just like in the original manga, when things get bad, players will be able to get some help from a friend in an exciting co-op gameplay to beat down strong opponents, or simply to enjoy mini-games such as fishing, bug-catching and so on!

What’s new with Unlimited World Red’s journey to the West? Find out in this interview with kawaii International Producer Karen Wai.

Boasting exclusive content, this new game offers hours of gameplay where you will discover two brand new characters – Red and his follower Pato – through an epic original storyline!

Topping that; an all-new mode called Battle Coliseum mode, inspired by the Dressrosa story arc, the characters compete in a tourney to test their battle abilities…

During this tournament, the fighters contest in five different battle types:

Welcome to the One Piece: Unlimited World Red walkthrough! Shinobii will be your guide showing you around the game’s island areas.

After the Prologue we get into a Luffy VS Caesar Clown boss battle at the end of “Episode 1: A Scene from the Past”.

HP & SP Gauges Note: The green HP gauge shows your health. The yellow SP gauge shows your current spirit. The HP gauge will flash red if you’re about to run out of health. Once your HP gauge hits zero, you’ll be knocked out. Your SP gauge goes up as you attack foes and take damage from enemy strikes.

Tip: If you have at least one bar on the SP gauge, to perform a Special Attack you can: Hold the R1 button on PS3 / R button on Wii U, and then press the Square button on Square on PS3 / Y on Wii U.

Let’s continue our adventure in “Episode 2: Rematch in the Hot Sand”. This level closes with a Luffy VS Crocodile boss battle.

Tip: Select status from the pause menu, then choose commands to view all the skills your party can use.

In “Episode 3: Mystery of the Leaves” you should prepare yourself for a Luffy VS Lucci boss battle.

More Tutorials: From the Pause Menu, go to Info, then select Tutorial to learn the basic controls, attacks, and what the various user interface elements mean.

After narrowly escaping Red in “Episode 4: The Red Count”, there’s a Luffy VS Whitebeard boss battle.

How To Save The Game: Select “Rest” at the inn to save your progress.

How To Download: Go to either the PlayStation Store or Nintendo eShop and on the top right or left side you’ll see a redeem or download code option, click on it and input the DLC code that came with your game.

How To Start Playing It: Once you redeem your DLC code, complete Episode 4’s Fishman Island arc and you’ll unlock a quest. To start the quest, go to the town and speak to the women to see a “download content” option, click it to begin.