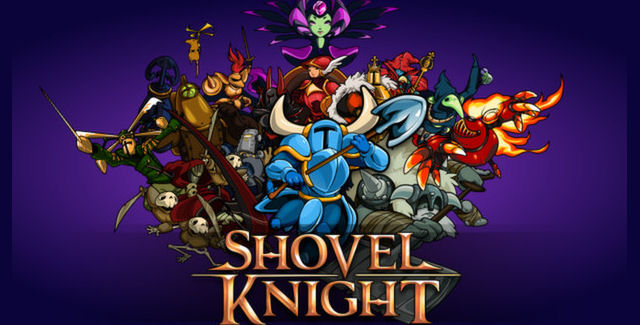 The Shovel Knight walkthrough will guide you through the beginning to ending moments of gameplay with strategy tips for this 2D action platformer on the PC, Mac, Wii U & 3DS.

Let’s start the Shovel Knight walkthrough with an introduction video!

Suitable for viewers of ages 3 and up. This game includes Mild Fantasy Violence.

Shovel Knight is a hot mashup of new and old! You play as the eponymous Shovel Knight, a small knight with a huge quest. Shovel Knight has come to this land with two goals: to defeat the evil Enchantress and quest for his lost beloved. He wields a Shovel Blade: a multipurpose weapon whose techniques have now been lost to the ages. Always honest and helpful, Shovel Knight is a shining example of the code of Shovelry: Slash Mercilessly and Dig Tirelessly!

But, between Shovel Knight and his beloved stands a cadre of villainous knights. These terrible foes, known as The Order of No Quarter, have been dispatched to prevent Shovel Knight from reaching the Enchantress, and will pursue their mission at any cost. If you love games with perfect platforming, beautiful art, infectious music, crazy bosses, humor and levity, and real heart… Shovel Knight is for you!

Welcome to the Shovel Knight walkthrough! Kwing & Amber will be your voice-over commentators showing you around the game’s levels.

Sharpen Thy Shovel. After the first The Plains level with the Black Knight boss battle, you get taken on a tour of the Village.

Tip: Destroying the checkpoint’s hourglass may mean you’ll gain one large pink diamond each time, but it also results in you losing the save location (yes, you’ll lose each checkpoint you destroy).

Money Bags Protip: The checkpoint system is nice and all, but it doesn’t help you recollect any floating money bags you lost whenever you die in a bottomless pit. For those situations you can whip out your Fishing Rod to drop a line down the bottomless pit where you fell to your death and it will help you recover your money again!

Let’s get shoveling in the Lair of King Knight. After this second level with the King Knight boss battle, you should explore the Village further to get Upgrades.

Tip: After Shovel Knight’s dream sequence is over and he wakes up, be sure to dig up your bonfire dirt to gain treasure.

Trick: Buy the Chaos Ball weapon as early as possible. This weapon is incredibly strong against most enemies and even some bosses, like this level’s early-game King Knight boss fight.

Ready, set, go! …into the undead Lair of Specter Knight. Then head to the Forest of Phasing for a bonus level.

Hint: Whenever you find a Meal Ticket in a treasure chest, visit the Gastronomer in the Village to Upgrade your Health!

It’s time for you to dig in! After entering the Lair of Plague Knight for the boss battle, go to Mona’s Mini-Game Madness.

Trick: The Explodatorium is the weapon hidden in this Plague Knight’s level. To get it you’ll need to possess the weapon from the Propeller Knight’s stage. Equipping this will make the jump at the start of the Explodatorium easier with the new horizontal dash move. (The ghost enemies make trying it any other way very difficult.)

Strike the earth and face off in the Treasure Knight boss battle, plus an encounter with “BAZ Knight” and Mr. Hat!

Tip: Once you get it, it’s wise to equip the Phase Locket at all times. You may need its quick invulnerability ability to pass by a troublesome enemy that pops up anywhere or avoid enemies that you cannot reach but can still hit you with ranged attacks.