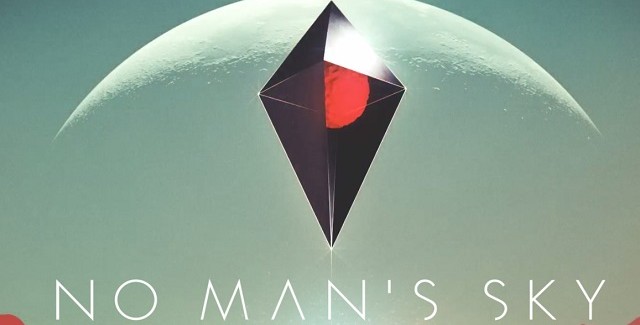 No Man’s Sky made an impressive splash at E3 2014 exclusively for PS4 via Sony’s Press Conference, where the game blew away anyone and everyone that laid eyes on it.

No Man’s Sky is a game about exploration and survival in an infinite procedurally generated universe.

* A TRULY OPEN UNIVERSE
Whether a distant mountain or a planet hanging low on the horizon, you can go there. You can fly seamlessly from the surface of a planet to another, and every star in the sky is a sun that you can visit. Where you’ll go and how fast you’ll make your way through this universe is up to you. It’s yours for the taking.

* EXPLORATION IS SEEING THINGS NO ONE HAS EVER SEEN BEFORE
Explore uncharted solar systems and catalog unique new forms of life. Every planet’s landscape is different from the next, and populated by species never before encountered. Find ancient artifacts that could reveal the secrets behind the universe. Choose whether to share your discoveries with other players. They’re exploring the same vast universe in parallel; perhaps you’ll make your mark on their worlds as well as your own.

* SURVIVE ON A DANGEROUS FRONTIER
Every solar system, planet, ocean and cave is filled with danger, and you are vulnerable. Your ship and suit are fragile, and every encounter can test your skills to the limit. From dog-fighting in space to first-person combat on a planet’s surface, you will face foes ready to overwhelm you. And one mistake could see you lose everything. In No Man’s Sky, every victory and every defeat has lasting consequences.

* BUILT FOR AN EPIC JOURNEY
Whether you want to explore and see things never before discovered, or directly set course for the center of the galaxy, how you play No Man’s Sky is up to you. But you cannot take your voyage lightly. You’ll need to prepare. Collect precious resources on the surfaces of planets and trade them for the ships, suits and equipment that will take you to your destiny in the stars.

Check out this even more beautiful and mind-boggling Infinite Worlds No Man’s Sky gameplay trailer.

This Indie title, developed by Hello Games (Makers of the Joe Danger series), No Man’s Sky looks absolutely beautiful and overloads the senses with fantastical worlds that are the things of dreams. Somehow putting them into digital, explorable form right before your eyes. It looks good enough to touch.

Check out 17 minutes of No Man’s Sky discussion with Sean Murray, the game’s creator.

The second half of the trailer takes your initial perception of what this game must be, and shatters it to pieces.

Hopping into a spacecraft, the player begins to fly through the atmosphere…. No wait…. higher, higher he climbs. The clouds dissipate… the atmosphere begins to fog…. purple space appears… And then…. THE HEAVENS OPEN UP. You are in space.

Fantastical spacescapes are now in your view full of shootable asteroids as the player rushes forward with other ships vying for your attention. Then a whole herd of ships comes blasting into view via Warp Speed, and the ships start attacking each other as the player whizzes past.

Here’s an in-depth discussion of No Man’s Sky and it’s story, gameplay & multiplayer.

Are these ships other players? They very well could be… but that’s just the beginning, from there, the player seamlessly flies down through the atmosphere of another planet, before blasting through the sky as the planet’s topography comes into view and zooms by.

The trailer ends just as the player takes a shot at another ship. Beckoning the player to ponder at things to come as the ship disappears into the distance and the No Man’s Sky logo comes onto the screen, giving us a Metroid-vibe with a pulsating brain encased in a crystal….

A hint at an alien species to come and a Mother Brain perhaps? Intrigue!

With your jaw on the floor, No Man’s Sky has undoubtedly just shot onto the top of everyone’s wishlist.

Many people thought No Man’s Sky absolutely stole the E3 2014 show, even from big-name publishers. Do you agree?

Here’s the No Man’s Sky image gallery.
Click on any of these image thumbnails to see the full-size photos: 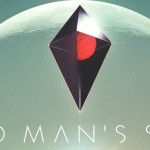 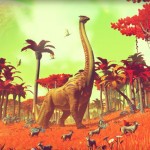 Jurassic Park, eat your heart out! 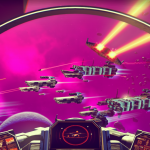 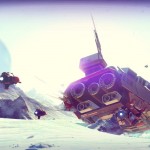 Sci-fi with ships on a crashed planet…


Personally, this game absolutely FLOORED me. If there is any one game that will make me go out and buy a PlayStation 4. It is this one.

No Man’s Sky simply looks absolutely jaw-dropping. And it is proof-positive of how far Indies have come, and how much acclaim they now command as they, quite literally, duke with and overtake AAA, corporation-funded monoliths; by tapping into the most powerful weapon of all. Our imaginations.

However I do have one niggling concern. I. Don’t. Like. Procedurally. Generated. Games.

However, I never HAVE liked may be the right thing to say. I’ve read that once you discover a planet, you can actually go back and visit it and everything will be just as you left it.

Additionally, while everything is procedurally generated, that doesn’t just mean the worlds you explore. It means EVER-Y-THING.

This includes all of the creatures, and presumably everything else. In other words, players will discover things the developers have never seen before. It is this sense of discovery that lies at the center of what No Man’s Sky is supposed to be. They want to bring back a sense of REAL discovery.

Very, very cool. I know I’m excited. What about you?