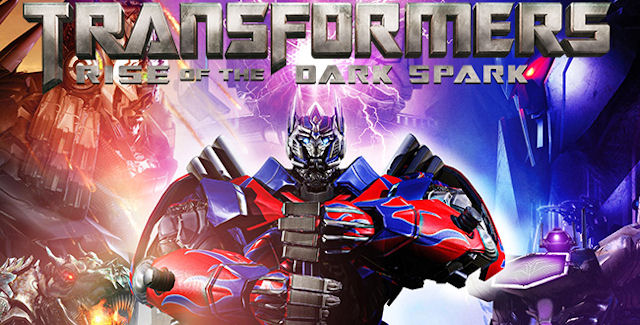 The Transformers: Rise of the Dark Spark walkthrough will guide you through the beginning to ending moments of gameplay with strategy tips for this third-person shooter game on the PC, PS3, PS4, Xbox 360, Xbox One, 3DS & Wii U.

Where two worlds collide! Explore two unique worlds as your favorite Transformers characters from both the movie, Transformers: Age of Extinction, and Cybertron universes in a battle to secure an ancient and powerful relic, the Dark Spark!

Let’s start the Transformers: Rise of the Dark Spark walkthrough with a story introduction video by Peter Cullen, the voice of Optimus Prime!!

Please note that viewers must be at least 12 to watch, so no harm comes to those with innocent eyes. This game includes Violence.

Index of Transformers: Rise of the Dark Spark Guides:

Players will be able to switch between the heroes of the noble Autobots and the nefarious Decepticons (over 40 playable characters in total) throughout the single-player campaign. Similar to High Moon Studios’ Cybertron entries in the highly regarded series, gameplay features nimble, fast-paced running-and-gunning combat paired with traversal and vehicle action across open battlefields for dynamic large-scale conflicts.

Players will also see the return of the fan-favourite multiplayer mode Escalation, which delivers wave-based survival-style gameplay for up to four players online cooperatively. It features upgradeable defence systems, recognisable adversaries from the lore, and an expanded roster of playable characters from past and present.

Additionally, an exciting new levelling system transforms single-player and multiplayer into one unified, persistent character development path. Experience earned in any part of the game unlocks potent awards and tactical loadout choices – including new characters, stronger weapons, special abilities, and consumable bonuses – for use throughout the entire game.

Welcome to the Transformers: Rise of the Dark Spark walkthrough!

Rabid will be your voice-over commentator showing you around the game’s chapters.

New Objective: Earth is under attack from Lockdown’s forces. Drift’s first order of business is to retrieve weapons from the old weapon lockers to arm up.

Tip: Press the right shoulder button (RB on Xbox / R1 on PlayStation / R on Wii U) to perform a Blade Dash with .

New Objective: The Matrix of Leadership formed from Primus himself grants the wearer the wisdom of the Primes. However, the badguys have now found its opposite… The Dark Spark who’s wearer can bend the universe to its will with brute force.

Time to put a stop to this.

Note: The “Entomologist” Side-Mission in this chapter is “In one hunt, take out of each of the 8 kinds of Insecticons with the Gear Shredder.”

The Decepticons versus the Autobots battle continues.

New Objective: Let’s make our escape with the Dark Spark without letting the Decepticons catch us.

Hint: Press down on the right analog stick (RS) to do a Melee Attack nearby your enemies.

New Objective: Meet up with Shockwave to retrieve the Dark Spark before the Autobots can get it.

New Objective: We’re off to the Boneyard.

Transformers: Rise of the Dark Spark Walkthrough continues on Page 2 with Chapter 6: The Gates of Kaon.