Nintendo goes Quake/Call of Duty/Battlefield with Splatoon, an all-new Nintendo-developed first-party IP exclusively for Wii U. And yes, it’s an online 3rd/1st-person shooter! — So what would happen if Nintendo were to create THEIR version of the perfect deathmatch-style FPS game? Well, you can see the results!

Splatter enemies and claim your turf as the ink-spewing, squid-like characters called Inklings in Nintendo’s new third-person action shooter game for the Wii U console. Challenge your friends in chaotic four-on-four matches, in which the goal is to get your ink on as many places as possible and claim your turf, all while strategically submerging yourself in your team’s colors and blasting your enemies. This is a colorful and chaotic online third-person action shooter exclusively on Wii U.

Here are some gamer reactions to Splatoon from the E3 show floor.

Key Splatoon Features:
* Team up and take on other teams in an action-filled battle to cover the level with as much ink as possible. Spray walls to access hard-to-reach areas.

* Covering more territory with ink unlocks power-up Super Weapons that can be used to attack rivals or cover more turf.

* Strategy is everything. Defeat enemies to splatter them in an explosion of ink, covering more turf for your team. But choose wisely: Players who only go after the enemy might find their turf redecorated in their enemies colors.

* Refill Ink Tanks, hide from opponents or move faster by turning into a Squid and diving into the ink with the tap of a button.

* Select between multiple control options on the Wii U GamePad controller, including using gyroscopic controls to look around, allowing for better aiming and control.

Here is a journalist’s take on Splatoon.

Splatoon takes everything people love about online First-Person Shooter action and turns it on it’s head! Instead of kills, the focus is on taking territory. Instead of shooting bullets, you shoot colored paint! Instead of hardened marines loaded to the teeth with real-life weaponry, prepared to defend their nation at all costs, you control a couple of kids with waterguns who are out to have a blast shooting each other in the neighborhood! Now THIS is what I call FUN!

In Splatoon, the goal is to be the first team to control the most territory, visibly seen by spraying the walls and floor with your color of paint. The first team (four-on-four) to cover the arena with the most Orange Paint (the “Good Guys”) or Blue Paint (the “Bad Guys”), WINS! Simple right? Not so fast!

In a twist for the ages, these kids can not only cover over the paint the opposing team shoots (slowing them down drastically if they step on it), but they can MORPH INTO SQUID and fly through their own team’s paint at breakneck speed with the touch of a button! Not only can you swim through your own paint, but you can literally swim UP WALLS or through fencing, and pop out or stay hidden at any time! The strategic possibilities this opens up are legion. It truly has to be seen to be believed.

Shooting an opponent will splatter them and prevent them from continuing to spread their turf, even though kills take a backseat to painting the town red.

Additionally, the GamePad comes in handy because it not only shows you a top-down map, but it shows you exactly how much of the map is covered in who’s paint, and does so IN REAL TIME. This means that, at a glance of the GamePad (or even of the TV screen), you can see who looks to be in the lead by how much opposing paint is swathed across the environment! Super neat!

Lots of other gameplay elements abound too. Because your opponents are shooting paint, you can literally SEE every bullet shot! That means you can tell when danger is just around the bend.

Now for 30 more minutes of Splatoon gameplay from Day 2 of Treehouse.

If you tap one of your teammates with the GamePad, you will rocket into the air and zoom down to their exact location.

And if you watch the trailer, you will see all kinds of different elements not shown off at E3 2014, including different kinds of weapons like a Rocket Launcher and a Paint Roller, and even what appears to be a super weapon Bomb thrown into the middle of the arena. Awesome!

Update: Apparently these are Super Weapons that unlock for your team depending on how much turf you have claimed by shooting the world in your color!

You can also use the GamePad’s gyro motion sensor to tweak your aim, which people who’ve played Splatoon say it makes all the difference in a way that a Control Stick just can’t match, allowing for an extra level of precision that’s much closer to a mouse.

Additionally, the Ink Tank on your back, essentially your ammo, only refills when you turn into a Squid. Making Squid gameplay extra important. Not only does “Squidding” (my new term, haha) allow you to swim super fast through your paint, but you can even use it to explore areas of the map that you can’t access any other way!

And here is fifteen more minutes of Splatoon!

Splatoon will launch exclusively for Wii U in the first half of 2015!

Here’s the Splatoon image gallery.
Click on any of these image thumbnails to see the full-size photos: 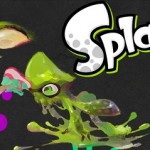 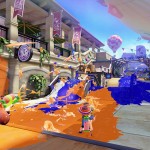 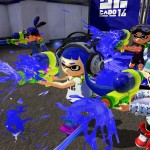 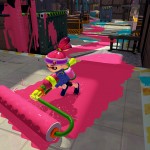 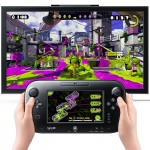 The war at a glance on your GamePad! 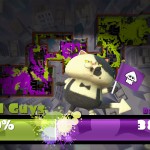 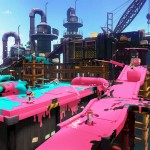 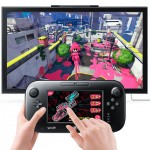 Tap the GamePad to rocket to your teammates! 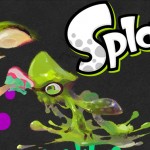 
This game is absolute chaos and looks like buckets of fun. I can’t wait to play it. It took Nintendo a long time to develop a real “Call of Duty”-killer, a literal online FPS/3PS, but this looks like a winner to me with so many ingenious new ideas.

I think this game will really infuse the competitive online shooter space with something eye-poppingly crazy and outlandishly colorful. Just what the FPS world needs!