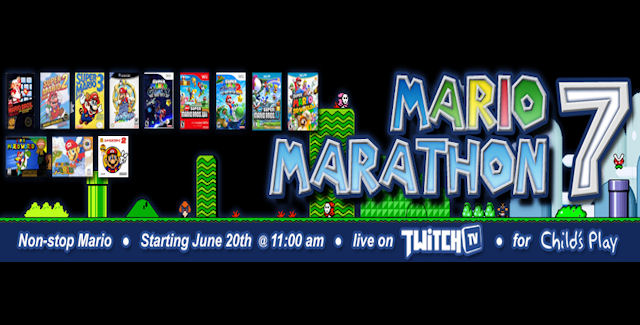 The LIVE feed will start playing automatically when you press play. Fun to watch!

If you keep donating to Child’s Play*, they will keep playing all weekend and beyond! Since 2008, the group has raised over $420,000 for Child’s Play. This year the team is pushing to cross the half-million dollar mark! The charity provides games, books and toys to a network of over 70 children’s hospitals worldwide.

As of right now, three former college room mates (Brian “Shirt Guy” Brinegar, John “Couch Guy” Groth, and Chris “Slouch Guy” Deckard), some other friends and Couch Dog are attempting to play through each one of the above Super Mario games in their entirety.

Mario Marathon is a multi-day charity drive broadcast live online through Twitch.TV. The event starts with a small group of gamers attempting to complete a list of levels from Nintendo’s popular series of Super Mario video games. Viewers of the show add levels to the players’ queue by making donations to Child’s Play. This continues until all of the levels in the queue are conquered. Throughout the show, viewers connect with the team through the event’s website and social media channels such as Facebook and Twitter. The event features celebrity call-ins, sing-a-longs, contests and raffles.

“The support for the Marathon and Child’s Play Charity continues to grow each year, which is motivation enough to keep it going,” says Brian Brinegar, Event Coordinator. “Year-round we receive messages from viewers and thousands of dollars in donations.” Even before the official start, donations from the event’s website has already contributed over $5,000. When asked what draws viewers to the event, Brinegar says, “Gamers share this common childhood experience playing Mario. The marathon lets us recreate that experience and leverage Child’s Play to share it with thousands of kids who are spending part of their childhood in a hospital.”

* Child’s Play Charity provides toys, games and books to patients of children’s hospitals world wide. It’s a game industry charity dedicated to improving the lives of children with toys and games in a network of hospitals worldwide. Since its inception in 2003, the charity has distributed over $17 million worth of toys, games, books, and cash. “We rely heavily on community run initiatives such as Mario Marathon.” says Jamie Dillion, with Child’s Play, “These fund raising events represent our greatest strength: the generosity and determinations of gamers.”