Far Cry 4 made a big splash at E3 2014 during Sony & Ubisoft’s Press Conferences, it will hit this November 2014 for PS4, PS3, Xbox One, Xbox 360, and PC, and is the direct-follow-up to Far Cry 3. It is being joint-developed by Ubisoft Montreal & four other devs: Ubisoft Red Storm, Ubisoft Toronto, Ubisoft Shanghai and Ubisoft Kiev.

In Far Cry 4, players find themselves in Kyrat, a breathtaking, perilous, and wild region of the Himalayas struggling under the regime of a despotic self-appointed king. Using a vast array of weapons, vehicles, and animals, players will write their own story across an exotic open-world landscape.

* PlayStation Plus Exclusive – Free Online Co-Op Invites For Friends Who Don’t Own the Game – If you own Far Cry 4 for either the PS4 or PS3 and are a PlayStation Plus member, you’ll be able to invite up to ten of your friends on PlayStation platforms who don’t own the game to play a free trial of online co-op with you. Explore Kyrat together, capture outposts, and more!
* Open World Co-Op – Far Cry 4 introduces drop-in open-world co-op, the most requested feature from fans. Explore & conquer the living world of Kyrat with a friend.
* Massive Open World – Discover the most diverse Far Cry world ever created. With terrain spanning from lush forests to snowcapped mountains, the entire world is not only alive, but deadly!
* Abundant New Wildlife – From Leopards to Rhinos to Black Eagles to vicious Honey Badgers, players will discover that something is hunting you at all moments, as you embark on your quest for resources and adventure.
* New Ways to Get Around – Scout enemy territory from above in the all-new Gyrocopter, and then plummet back to earth in your Wingsuit! Climb aboard the back of a six-ton elephant and unleash it’s raw power on your enemies!
* Powerful New Weapons – Choose the right weapon for the job, no matter how insane or unpredictable that job might be. With a diverse arsenal, you’ll literally be prepared for anything!

Check out this developer commentary video of the trailer above. Gives awesome insight into what to expect while playing Far Cry 4.

Two-player co-op (no word if it can be done locally, but definitely online), which is drop-in/drop-out, is the biggest new feature in Far Cry 4. And it was the most requested feature by fans, say the developers.

When another player drops into the open-world, all your single-player missions turn off, and you are left with the entire open world to explore and tackle with a friend, including, I presume, co-op exclusive missions.

You can do everything you can do in single-player AND MORE, such as ride the new two-man helicopter vehicle known as the Buzzer, which allows one player to pilot and the other to shoot.

When you are done playing with a friend, all of your co-op progress is seamlessly saved for your next matchup with that player. There are no menus to go through, everything is seamless when transitioning from one player to co-op!

Check out this introduction to the evil dictator, Pagan Min, of Far Cry 4 from the game’s opening cutscene!

Enter: The Grappling Hook. This is the second biggest new feature in Far Fry 4. The Grappling Hook allows you to cross the large chasms that hindered your progress in Far Car 3, and also plays up the verticality of the new environments which are set in the mountains, similar to the country of Napal. For the first time in the series, you can now be attacked from above, as well as below.

Two different AI paths will cross throughout the game to allow for randomized events that will be unique to each player’s individual adventure. Since the world is full of various animal life, you can see a bird swoop down & grab it’s prey, as an example of the random things that can happen while you are playing. The bird catching it’s prey is NOT a scripted event, but is instead the natural progression of both the bird AI and the prey AI intersecting! Very, very cool.

A new weapon that has been introduced is the Auto Crossbow, sacrificing distance for the ability to shoot quicker. You can kick all kinds of objects, in the demo an explosive barrel is attached with a bomb, then kicked into an enemy below you and detonated! YEAHHH!

Here’s a developer interview on Far Cry 4 from the E3 2014 show floor.

You can now SHOOT while driving one of the numerous vehicles in the game. Not only can you shoot from behind the wheel, but you can also literally leap out of the vehicle and hijack a vehicle next to you in one seamless, gruesome motion! HECK YEAH!

The Wingsuit returns in a big way, with a huge focus now that you are in more vertical, more mountainous environments. This time the developers promise that you’ll get the Wingsuit before the middle of the game, so you can have it early on in your adventure. As before, the Wingsuit allows you to glide through the air, allowing you to cover huge distances in a quick amount of time.

What’s really the third biggest feature are the new interactions with, and more abundant than ever before (not to mention more realistic), animal life. Elephants, for example, are now a huge part of Far Cry 4, and show off just how frickin’ cool it is to have lots of animals in a first-person shooter. You can mess with them to cause the elephants to go into a rage, at which point they will smash into anything in their path, or you can mount and ride them as if they are an all-new kind of vehicle! So. Awesome.

Wait until you see the special effects of the elephant crashing into an enemy followed by an explosion in the trailer above!

Here is an in-depth look at Far Cry 4 as the developers stop by to show off the game in this Stage Demo.

Last but not least, in a VERY cool idea, Far Cry 4 will be the first console game ever that allows you to invite friends who DON’T OWN THE GAME to play with you. This will only be available on the PS4 & PS3 versions of the game, as an exclusive feature for PlayStation Plus Subscribers. Those people will get ten invites to send to their friends. Friends will then be able to download the co-op portion of the game, and will be able to join you in co-op whenever you are playing.

All told, fans have A LOT to look forward to in Far Cry 4!

Pre-order Far Cry 4 now and get an upgrade to the Far Cry 4 Limited Edition, which includes three exclusive bonus missions and a bonus Harpoon Gun. Each store location also has it’s own pre-order incentives exclusive to that shop, so definitely look around before you decide to plop down that cash. A special edition version is also available.

“Every second is a story” is the Far Cry 4 tagline! Looks to me like they got it perfectly right, eh!

Here’s the Far Cry 4 image gallery.
Click on any of these image thumbnails to see the full-size photos: 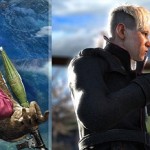 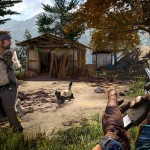 OMG a skunk attacks! LOOK OUT! 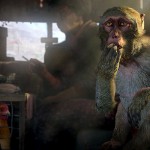 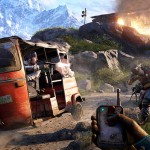 
So how excited are you about Far Cry 4? I’m not even an FPS fan and this game looks AMAZING.