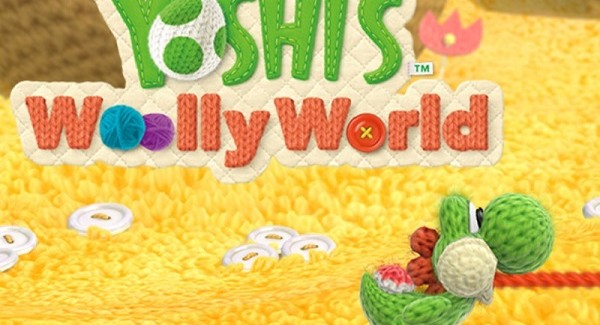 Yoshi’s Woolly World is the final name for “Yarn Yoshi”, a Wii U-exclusive all-new Yoshi game that was announced and briefly shown at last E3 but didn’t have a final name. This year, we got to see how far along it has come!

And boy does it ever look absolutely BEAUTIFUL. This will be the first Yoshi console title since 1998’s Yoshi’s Story for N64! It will be released in the first half of 2015.

Embark on a new Yoshi adventure in a world made from yarn, cloth and textiles. Explore the world by using yarn to weave wool platforms and warp pipes to reach new areas, and gleefully unravel its secrets and puzzles by pulling yarn walls apart. Add a little color to Yoshi’s life with a spectrum of yarn balls. Then team up with a friend to have a ball together in this wild and woolly world!

* Players tangle, pull and stitch yarn to explore Yoshi’s world in creative new ways.
* Yoshi has never been more adorable than as a toy knit from yarn. His entire environment is made from materials like felt, yarn, cloth and cotton, creating a gorgeous HD world that looks good enough to touch!
* Instead of eggs, Yoshi tosses yarnballs at enemies. He can incapacitate a Piranha Plant by muzzling it with a piece of colored string. Or he can even use the yarn to knit together background elements.
* Gobble friends and turn them into eggs! Then toss them into hard-to-reach heights and secret depths to discover in two-player cooperative play.
* The game is co-developed by Good-Feel, the developer that created Kirby’s Epic Yarn (Wii, 2010), and Nintendo Co Ltd., under the supervision of Takashi Tezuka, producer of Yoshi’s Story and the Yoshi’s Island series.

Yoshi’s Woolly World takes the yarn concept seen in Kirby’s Epic Yarn (Wii, 2010) to the next level, using the graphical power of the Wii U to apply an absolutely gorgeous, hand-made, Yarn-focused D.I.Y. look to the world of Yoshi. You really have to see the game in action to understand how beautiful it is, although conceptually it is simply a continuation of what we saw on the Wii with Kirby’s Epic Yarn (called “Yarn Kirby” in Japan).

Check out the absolutely beautiful “Making of Yoshi’s Woolly World” developer diary that Nintendo used to fully unveil the game for the first time at E3 2014, while also introducing us to it’s developers.

Everything in Yoshi’s Woolly World is made up of different kinds of fabric and different kinds of sewing material, and acts and behaves exactly in the manner you’d expect these real-world objects to behave. The result is a startling, fully-realized side-scrolling platformer with amazing effects and the cutest living bean-bag Yoshi you’ve ever seen! BRING ON THE REAL-WORLD BEANIE VERSION!

Because the world is made of yarn, Yoshi now has some new powers and abilities. He can use his tongue to “unravel” parts of the world (pulling the yarn away in one continuous motion a string at a time), he can pull back fabric using his tongue, and he can now be equipped with wheels in place of his feet!

All of the above titles feature the same Yoshi staples that have been with us since the SNES, with Yoshi eating enemies and swallowing them to create eggs, then throwing those eggs and ricocheting them off walls to solve challenges, all the while bopping enemy heads to destroy them with his jump, kicking his feet in the air to “flutter jump” and reach further away platforms, activating floating clouds that create changes in the environment by throwing eggs, using his tongue as a weapon, and collecting Coins & Flowers strewn about the levels.

Differences in Yoshi’s Woolly World include eggs that aren’t really eggs, but balls of yarn that come in both different colors and different sizes, presumably all with various effects. Coins have also been replaced with small gems of various colors.

The biggest new feature however is a two-player co-op, where two Yoshi’s appear on-screen at the same time, just as in the New Super Mario Bros. Wii/Wii U console games.

I wonder why they didn’t add four-player? Also no word on whether or not this means ONLINE co-op, or if it is strictly offline. Given that this is Nintendo, you can probably bet on the latter. Sadly.

Probably because the new ability to lick your friend and turn THEM into a yarnball, that can then be spit out or aimed and thrown, would’ve made things too complicated. You can imagine the kinds of challenges Nintendo has come up with using this new co-op mechanic. Like the ability to throw your friend up to a higher platform, or lick them just as they are about to be attacked by enemy, thus keeping them safe.

Additionally, a new power-up appears in the form of Hatched Eggs…. these eggs look like normal Yoshi eggs, but have a hatched chick for the top half. When thrown, they create a cloud platform that stretches in the direction shot, that you can then step on as a platform and used to reach inaccessible areas! 😀

It’s also worth noting that the first boss seen in this E3 2014 demo looks absolutely awesome with GORGEOUS graphics and the lil’ Lava Puppy is super, super cuuuuute. Sqeeeee!

Here’s the Yoshi’s Woolly World image gallery.
Click on any of these image thumbnails to see the full-size photos: 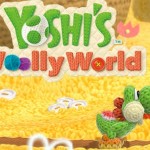 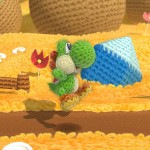 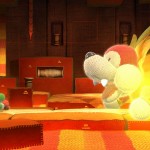 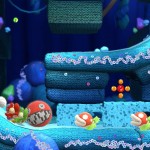 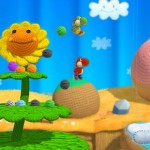 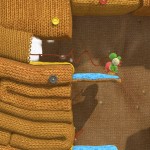 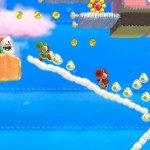 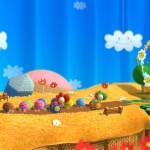 Yoshi has wheels for feet! And you can see the Flower goal! 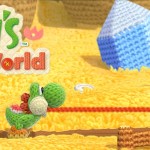 So Yoshi’s Woolly World looks awesome. HOWEVER, I can’t help but feel a smidge disappointed that we aren’t seeing anything entirely new, and that they again went with the Yarn style.

This is kind of a theme of Nintendo’s E3 2014 IMHO, a lot of retreading, even though the game’s STILL look amazing and will offer incredible design and that Nintendo touch that’s unparalleled so it’s hard to really complain.

HOWEVER, giving us two Yoshi games (Yoshi’s New Island on 3DS & now Yoshi’s Woolly World) and two Kirby games (Kirby Triple Deluxe on 3DS & now Kirby Rainbow Curse on Wii U) IN A ROW. Ehhh, I don’t know about this…

I wish Nintendo offered us more diversity, but I think they do this due to the fact that it is easier & quicker to pump out another Yoshi game or another Kirby game, than it is to create something entirely new from whole cloth… pun intended 😉

The good news for Nintendo is that Yoshi is so gosh-darn adorable that you can’t hate this game. It’s impossible. So it’s guarenteed to sell like hotcakes. I’m definitely looking forward to it myself! I still need to track down a copy of Kirby’s Epic Yarn…

What do you think of Yoshi’s Woolly World? Do you love the evolved Yarn style? Is it one of the cutest games you’ve ever laid your eyes on? Is this one of the game’s that’ll convince you to buy a Wii U if you don’t already have one?