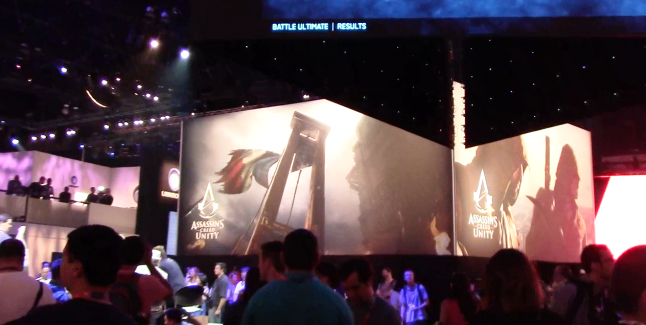 Ubisoft. The monster of E3. I’ve been to E3 twice now and both years, Ubisoft has been the booth showing off the most AAA titles. It’s physically not the biggest booth, but when it comes to content…let’s just say that Ubisoft booth tours tend to take at least 2 1/2 hours long.

Out of all their major releases, however, Assassin’s Creed Unity is by far the one I am most excited about. So, this was my priority at the booth and I’m happy to say that I was able to get VIP access into the AC Unity behind closed doors demo 😀

The really cool thing about this behind closed doors demo was that it wasn’t just a theater, as it usually is. It was a room with 2 rows of TVs with a Ubisoft representative at each one. So, everyone got an individual demo playthrough and we were aloud to ask questions on the fly. We were all very cramped in there, but, in my opinion, this is the way to go when showing off a demo.

Since this was “behind closed doors”, I was not permitted to record any footage of what I was seeing on screen BUT I was given permission to record an audio “interview” while the representative played the demo.

So, please enjoy this commentary about the demo for Ubisoft’s newest installment in the Assassin’s Creed series: Unity.

SIDE NOTE: I asked the Ubisoft rep, after I stopped recording, whether the demo he was playing was a PC port. He said, it was but that it was emulating Xbox One graphics and performance. Let me just say, it was very impressive. Enjoy!

Are you excited for Assassin’s Creed: Unity?