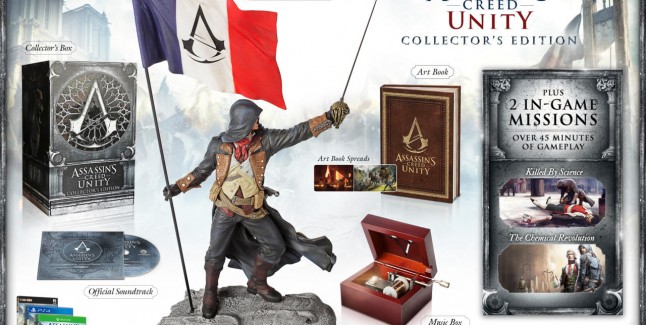 Multiple Assassin’s Creed Unity Special Editions & Collector’s Edition boxsets have been announced and confirmed by Ubisoft and are now available for pre-order (the game hits on October 28th 2014 in the U.S. & Europe), along with an extra purchasable Season Pass (that gives you all upcoming DLC for a cheaper overall set price).

These various special edition boxsets differ depending on region (so far Europe & North America/USA only), and many include particular pre-order bonuses depending on what store you purchase them at. Pricing has yet to be announced.

There are four special editions Americans will have access too (So far… hopefully they won’t add more). These are: The Collector’s Edition, The Bastille Edition, the GameStop Edition and the Guillotine Edition, with the latter being the biggest, best and most expensive set, the first being cheapest set.

Europeans will have four special editions to choose from. They are: The Special Edition, The Bastille Edition, The Notre Dame Edition (Similar to the US Collector’s Edition w/out the Music Box) & The U-Play Edition (same as the Guillotine Edition in the U.S.).

Here is what each Assassin’s Creed Unity Special Edition Contains: 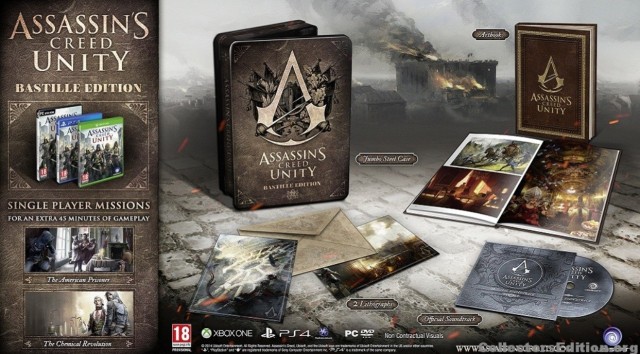 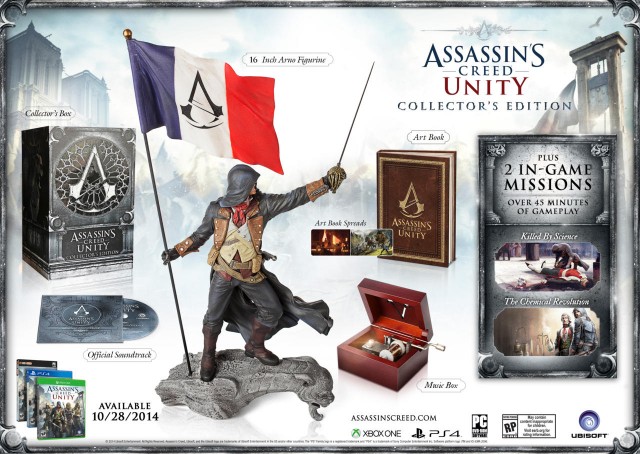 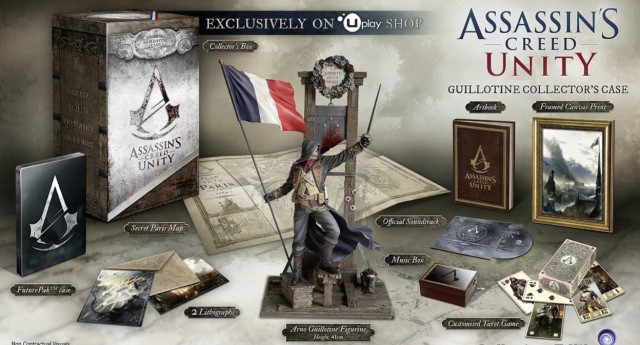 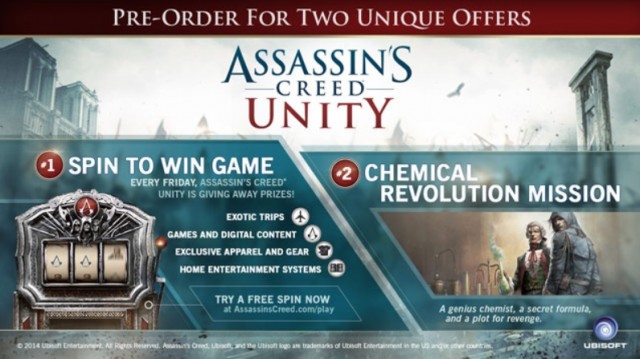 Additionally, several exclusive pre-order bonuses (digital items) are available in America that differ depending on what store you pre-order from. They include:

No word on how these digital items will work in Europe or if they will be available and where.

Europe gets the following (see above for descriptions of items): 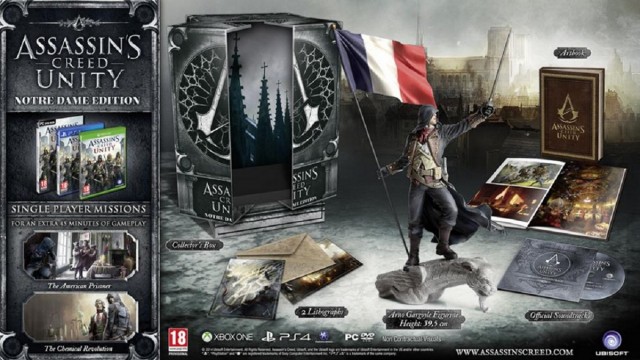 Uplay Edition — Same as the USA Guillotine version above. 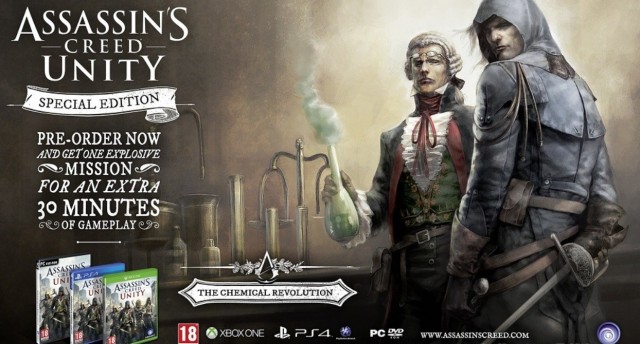 Last but not least, a real life-sized replica of Arno’s Phantom Blade Weapon will be yours to purchase at a price of $60! Sold separately. You can either display this, or wear it to show how badass you are. Created by McFarlane Toys, it features a “functional hidden blade, retractable crossbow arms and a soft firing dart.” It will be available only in “select countries” in limited quantities and will hit stores at the same time as the game on October 28th 2014. 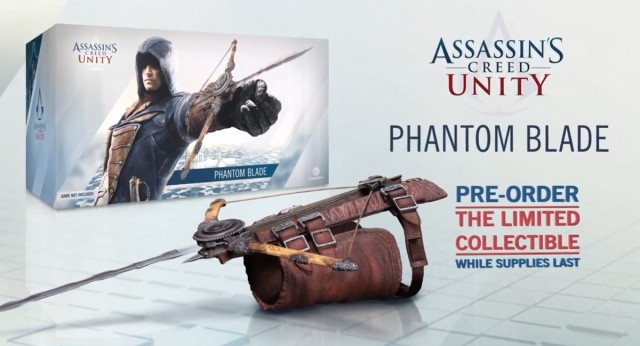 Here’s the official description of the Phantom Blade:
“Now you can wield the Assassin’s legendary Phantom Blade; a must-have collectible accessory for fans of the Assassin’s Creed franchise. This life-size replica of Arno’s signature weapon features a functional hidden blade, retractable crossbow arms, and soft firing dart as seen in Assassin’s Creed Unity. The intricately sculpted plastic blade and crossbow attach to the bottom of the forearm, while the adjustable straps and highly detailed simulated-leather gauntlet attach to the top of the forearm with a strap and buckle. Display this as part of your collection, or wear it to complete the ultimate Assassin look.”

Key Features:
* Life-size thermoplastic replica of Arno’s Phantom Blade from Assassin’s Creed Unity, complete with hidden blade, retractable crossbow arms, and firing soft plastic dart.
* Replicated from an intricately sculpted and hand-crafted design by award-winning McFarlane Toys – world renowned for creating high-quality collectibles based on the biggest entertainment properties.
* Adjustable straps fit all sizes.
* Rigorously safety and reliability tested for actual use and rated 17+. Made out of PVC and thermoplastics.

About the Chemical Revolution Bonus Mission (22 Minutes of Additional Gameplay)
Antoine Laurent de Lavoisier is considered to be the “Father of Modern Chemistry”. As a result of his efforts, he was able to create the formula for a poison bomb. Unfortunately he was taken before he could give it to you. Help him escape his kidnappers and recover the formula of the precious bomb.

About the American Prisoner Bonus Mission (15 Minutes of Additional Gameplay)
After being involved in the American Revolution, Thomas Paine lived in France for most of the 1790s, becoming deeply involved in the French Revolution. Regarded by some as an enemy of the nation, he was arrested and imprisoned in a Parisian “Hotel Particulier”. Infiltrate his prison, find Paine and collect all of his manuscripts before they are stolen by his enemies.

Here’s the Assassin’s Creed Unity Special Editions image gallery.
Click on any of these image thumbnails to see the full-size photos: 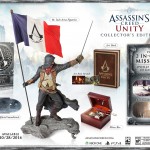 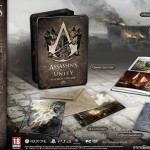 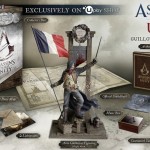 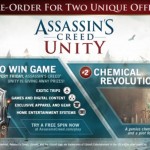 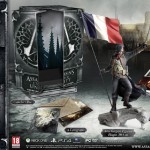 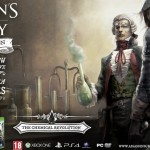 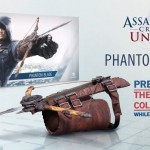