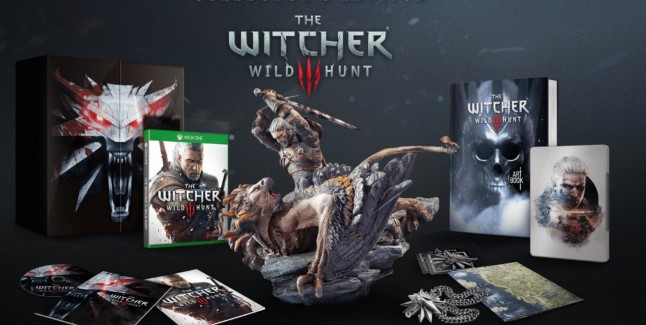 The Witcher 3: Wild Hunt Collector’s Edition has been announced and is coming to Xbox One, PlayStation 4 and PC when the game launches on February 24th, 2015!

The CE will ONLY be available through pre-order, so be sure to order it as early as possible if you want to get your grubby mitts on this gargantuan set.

Thankfully, even if you go with the standard edition, you’ll still get your money’s worth with a special edition-lite that’s included with every edition of the game. That means you’ll get some extra premium goodies stuffed in there to keep all the fans happy for those that can’t afford the much-more-expensive CE.

STANDARD EDITION – $60
“Dedicated to gamers who want more from physical box editions of games than just the disc and manual, containing premium items prepared by the developers, this edition of The Witcher 3: Wild Hunt is the definitive answer for those gamers who want to enter the Witcher universe with style.”

Here is an official CD Projekt Red trailer for the Witcher 3 Collector’s Edition!

COLLECTOR’S EDITION – $150
The Wild Hunt Collector’s Edition brings Witcher fans the fruit of our hard work and passion–what we think is the most artistically complete game figure ever made for a collector’s edition of a game. Forged of supreme-quality materials and containing exclusive content straight from the developers, The Witcher 3 Collector’s Edition is every Witcher fan’s dream come true.

The Collector’s Edition Contains:
* The standard edition of the game, containing: the official soundtrack, a beautiful and detailed map of the in-game world, unique stickers, and the developer-created “Witcher Universe – The Compendium”.
* FIGURINE: A giant, 33x24x26 cm, 100% hand painted, Polystone figure of Geralt of Rivia battling a Griffin.
* Medallion: An exclusive, collector-grade-metal Witcher medallion.
* Steelbook Case: A one of a kind SteelBook (i.e. metal) case with exclusive artwork.
* Artbook: A two-hundred page artbook, containing breathtaking art from the game.
* Collector’s Case: Huge outer and inner Collector’s Edition Boxes to store your Witcher 3 merchandise in!

In addition, those that pre-order the game at GameStop will snag an exclusive Witcher logo keychain and Witcher 3: Wild Hunt poster! Also please note: all three versions of the game contain the same exact content, whether you are playing on Xbox One, PS4 or PC. You can buy the game at Amazon, GameStop, Best Buy, Target, Walmart & Amazon (in the United States of America).

Additionally, you can purchase the game on Steam and Gog.com, the latter of which gets you a DRM-free copy, plus offers exclusive goodies including a digital comic, four-exclusive songs for the soundtrack, exclusive wallpaper, avatars & artwork, Neverwinter Nights: Diamond Edition free, and free closed-beta access to the digital version of The Witcher Boardgame for play this summer! More exclusive digital additions will be announced later. All digital versions of the game will include the Digital Artbook, bonus making of videos/trailers in 1080HD and a detailed digital map.

The developer, CD Projekt Red, runs the Gog (previously stood for “Good Old Games”) digital storefront platform, so it’s worth buying it there just to support the developer, as 100% of the proceeds go back into their business. Buying on Gog.com will also net you 20% off if you own The Witcher 1&2 (15% off if you just own one of the games), whereas Steam gets you 10% off.

Even if you own hardcopy version or other versions of The Witcher 1 or 2, you can still get the Gog.com discount by registering them to gog.com. Last but not least, international customers outside the U.S. who buy The Witcher 3 on GOG.com will get a “fair-price” bonus where the price difference between the U.S. and international copies of the game will go back into your gog.com account as store-credit that you can use to purchase other games on gog.com! Now that’s LEGIT!

It’s also worth noting that Prima Games will be publishing two guides for The Witcher 3: Wild Hunt, a softcover guide and a Hardcover Collector’s Edition guide, alongside an iBook version of the guide and a mobile-friendly digital version. Veteran guide-author David SJ Hodgon will be doing the duties, having previously worked on the official Prima guides for Watch Dogs, Fallout 3, and The Elder Scrolls V: Skyrim, among others.

“I am both honored and excited to be writing the official Witcher 3 strategy guide,” said author David Hodgson. “I can promise meticulous attention to detail, copious maps and guidance no matter what gameplay decisions are made, and aim to leave no stone unturned (and no Griffin un-bludgeoned), in my quest to provide a worthy tome for fans of the game and series.”

Included in the official strategy guide will be complete coverage of all the main and sidequests in the game, highly detailed maps of every area and location, and info on all points of interest.

There’s also a Dark Horse comic-book series that is definitely worth checking out!