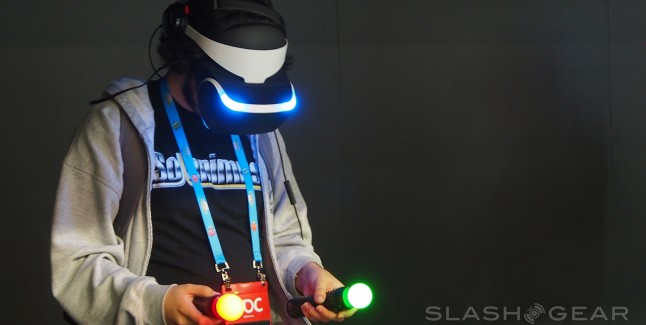 Sony’s PS4 Virtual Reality Helmet Project Morpheus got the pre-E3 media-blitz treatment thanks to Jimmy Fallon and The Tonight Show, where the future of gaming was played live and onstage during the show! Without further ado, HERE’S JIMMY!

As you can see in the video, it’s quite hilarious to see what “normal” people will react like when they put on the helmet and get a glimpse into what it’s like to actually BE inside the game.

This is the kind of 3D headset gamers have always dreamed of, and was tested with Nintendo’s 1996 32-bit Virtual Boy system, but has finally been taken to the next level with Sony’s upcoming VR headset and the power of current-gen consoles & PC’s.

And, of course, there’s still the one that started it all, the upcoming indie-developed Oculus Rift (who kicked off the revolution) which is still in development. Valve also has a VR headset (PolkaDot) in production as do other companies. The future is looking mighty interesting!

Here is the reveal video that showed of Project Morpheus at GDC 2014 when it was first announced and shown to the public.

* Thanks to Slashgear for the image.