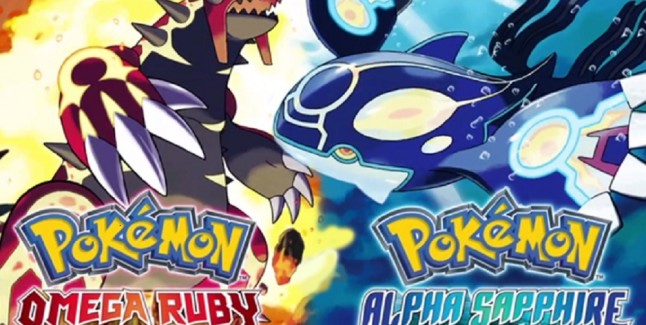 Pokemon Omega Ruby & Alpha Sapphire will be released for 3DS/2DS this November 2014 worldwide.

These games represented the third-generation of Pokemon following Red/Blue/Yellow for Game Boy circa 1998 and Gold/Silver/Crystal for Game Boy Color circa 2000. They were also the first and only core-Pokemon titles to be released for the Game Boy Advance.

Omega Ruby & Alpha Sapphire will be full top-to-bottom remakes of the beloved Ruby & Sapphire games, thus making full use of the Nintendo 3DS’ graphical power and key features, including StreetPass, SpotPass, Online Trading/Battling, stereoscopic 3D graphics (on 3DS, natch) and a fully-realized polygonal 3D world like the one seen in Pokemon X/Y along with redesigned characters. All-new features will most likely be introduced as well as updates to the key features introduced in Pokemon Ruby/Sapphire.

You can catch a glimpse of the new Mega Evolutions in this video:

Among confirmed new features for Omega Ruby & Alpha Sapphire are the addition of three all-new Mega Evolutions (a feature first-introduced in Pokemon X/Y) that allows you to temporarily evolve particular Pokemon during battle if you have the correct Item, the Pokemon is friendly to you and you’ve progressed far enough in the story to earn the Bracelet that allows for Mega Evolution.

In addition to the three Pokemon that get new Mega Evolutions, all-new regular evolutions for the game’s two Legendary stars, that grace the covers of both titles, will be revealed in Omega Ruby & Alpha Sapphire.

Legendary Pokemon Groudon (featured on Ruby/Omega Ruby) and Kyogre (featured on Sapphire/Alpha Sapphire) will be able to evolve for the first time into a Prehistoric/Primal version via a process called “Ancient Devolution“. Previously these Pokemon did not evolve in any way. Definitely exciting for Pokemon fans!

Additionally, the Generation III Pokemon Sceptile and Swampert, and the new X/Y Legendary Diancie, will each get a new Mega Evolution.

Mega Sceptile morphs into a Grass/Dragon-type, whereas Mega Swampert simply grows stronger (no type change, he remains Water/Ground), as does Mega Diancie who remains Rock/Fairy. You’ll evolve these Pokemon to their Mega Evolution forms once you’ve obtained the Mega Bangle Item in the game.

Look forward to more new information on Pokemon Omega Ruby & Alpha Sapphire starting on Tuesday, June 10th when Nintendo will present their E3 2014 Press Conference, and the show floor for the 2014 Electronic Entertainment Expo will open; with tons of new game announcements for the following three days.