Not much is known about Mortal Kombat Ten, but a quick glance already reveals the tremendous graphical fidelity that NetherRealm is aiming for with the next-generation consoles, and the reveal trailer shows off the brutal violence that is a hallmark of this franchise; which has been taken to the next level in this newest installment. Truly this will be a HARD M rating. Under 18 need not apply.

It’s been hinted that not only will brutal violence like beheadings, body slicings, limb severings and buckets o’ blood (pretty par for the course, right) be front & center as in any good MK game, but Mortal Kombat X may be the first game in the franchise to actually feature GUTS, completely rendered in full detail, located inside each of the polygonal fighters! What does that mean exactly? That means that when a character is sliced open, specific organs can actually come tumbling out, whether it’s the stomach or long-intestine or liver, and we’re given a brief glimpse of this in the new trailer. Remember when Kano’s Heart-Ripping Fatality was impressive?!

Check out the debut teaser trailer for MK10, which features an original rap track by Wiz Khalifa titled “Can’t Be Stopped”; And also highlights the game’s catchphrase, “Who’s Next?”, in the lyrics of the song.

Gorefiends will surely be satisfied with this development on fully rendered internal organs aka GUTS. It’s not hard to imagine the kinds of brutal Fatalities that will now be possible. However it may kick the gross-out factor up several notches as well, making it even tougher to stomach for certain people… And a parent’s nightmare. NOT something I’m a fan of personally (gore), even though I love MK. Hopefully this game will feature the ability to tone the violence DOWN, for those who are squeamish yet still fans. In this day and age, I feel that’s something that should be included.

This rendering of internal organs builds on the way individual bones were rendered and X-Rayed in MK9 and could be broken with a zoomed in close-up, and sounds like a natural progression that is only made possible by the tremendous graphical power of the next-generation platforms, which will now not only allow you to break individual bones, but damage internal organs as well! And that’s DURING THE FIGHT, as hinted at by the trailer, not just for Fatalities and Finishing Moves.

Even if it was the power of next-gen that brought this idea of rendered guts to life, those “stuck in the past” need not be alarmed, as Mortal Kombat 10 will still be releasing on current, er, “last-gen” consoles i.e. Xbox 360 and PS3, in addition to Xbox One & PS4 (and PC). Ensuring that Warner Bros. has all their bases covered with this one (Sadly a Wii U version does not seem to be in the cards… Not that anyone expected less).

Here’s the Mortal Kombat X image gallery. Click on any of these image thumbnails to see the full-size photos: 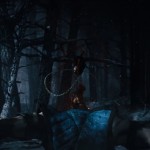 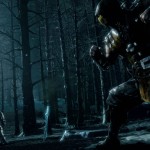 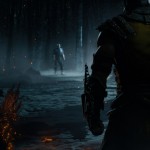 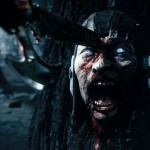 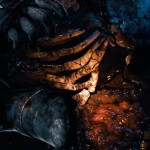 
It has also been confirmed that Mortal Kombat X intends to take online gameplay to a new level of intensity, as “every match matters” in the global battle for supremacy via a persistent online, fully-connected experience. We’ll learn more about exactly what these buzzwords really mean soon.

What characters will appear in this game? Scorpion and Sub-Zero have already been confirmed, and we’ll surely learn a few new ones in a couple days as E3 2014 approaches. And in a very cool new twist, multiple versions of each character with what sounds like different movesets and tactical strategy depending on what version is selected will also come into play. All of the core characters you’ve come to love & expect, from Sonya Blade to Johnny Cage to Shao Kahn, will certainly make the cut, one imagines.

“Mortal Kombat is our acclaimed, world-renowned franchise and we are now advancing the fighting genre with Mortal Kombat X,” said Martin Tremblay, President, Warner Bros. Interactive Entertainment. “NetherRealm Studios is best in class at delivering games fans love and they are taking their iconic brand to the next level with Mortal Kombat X.”

“Mortal Kombat has always been about over-the-top, visceral fighting and with Mortal Kombat X we wanted to utilise the power of new-gen consoles to give players our most intense game yet,” said Ed Boon, Creative Director of NetherRealm Studios. “The team has worked hard to make sure Mortal Kombat X delivers everything fans expect along with new characters, new game modes and an all new graphics engine.”

I’m super excited to see more of this game in action. Believe it or not, I completely missed out on Mortal Kombat 9, and in fact, never played any of the newer games in the series going all the way back to Deadly Alliance. I feel like I majorly missed out, and I plan on playing through those titles before this new one hits. The last one looked absolutely phenomenal. I must say however that I hope they don’t play up the gross-out factor too much. As that is a major turn-off for me. We shall see what exact direction they plan on going in a few short days.

Developed by NetherRealm Studios who made MK9, this is the highly-anticipated tenth entry in the long-running Fighting Game franchise that began it’s life by Midway and built off the success of Street Fighter in the early 90s (1992), and innovated with outrageous violence that had never been seen up to that point. It also coined words and phrases that have become part of the gaming lexicon like “Fatality”, “Finish Him!”, “Toasty!” and “Get Over Here!”

Following the release of Mortal Kombat 4 (1997) and previous titles built for the arcades (MK1, MK2 [1993], MK3 [1995] and MK4 were all first released on arcade machines, then ported to less powerful consoles), the series fizzled out around the turn of the millennium, before finally being rebirthed as a console fighting game franchise with 2002’s Mortal Kombat: Deadly Alliance (GameCube, Xbox, PS2). Followed by sequels “Deception” (2004) and “Armageddon” (2006), the franchise once again was on life-support near the mid 2000s. Things got worse in 2008 and 2009 following the release of Mortal Kombat vs DC Universe (2008), when parent-company Midway went bankrupt. The MK team was picked up by Warner Bros. in the sale of Midway’s assets and longtime franchise producer and co-creator Ed Boon and his team formed “NetherRealm Studios”. Finally, they successfully revived the franchise by going back to their blood-soaked, dramatic, and serious roots of violence and gore with 2011’s self-titled “Mortal Kombat” (technically MK9) for Xbox 360 & PS3. A monster hit, Mortal Kombat was BACK. And now, finally, we have reached the threshold of thresholds, the long-awaited TENTH entry in this blockbuster series! Mortal Kombat 10 further follows after the tremendous success of NetherRealm’s previous project, the superhero DC Comics fighting game ‘Injustice: Gods Among Us” (2013).