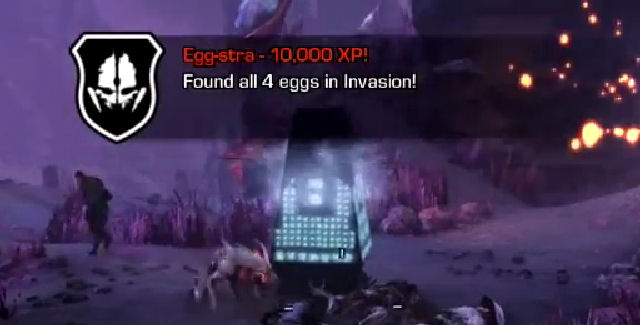 Let’s take a look at some fun Call of Duty: Ghosts Invasion easter eggs for DLC Map Pack #3! They can be found if you know where to look! 🙂

Easter eggs have been confirmed for Call of Duty: Ghosts Invasion. Watch footage of them all below.

What to do: Go on an Egg Hunt in the 4 new Multiplayer Maps — Departed, Pharaoh, Mutiny & Favela — and remember that must be done in a public match. You can find 4 Extinction Hive Eggs throughout the Invasion Maps (1 in each of the 4 maps). Shoot each egg nest to progress.
Once you’ve shot all 4 egg nests, go into the new Awakening map on Extinction Mode to scan an obelisk to get your reward.

What you get: Your reward for this “Egg-stra Awakening!” performance is that you gain 10,000 XP!

This easter egg can be found in the Extinction Mode “Episode 3: Awakening” map.

Shoot 4 illuminated green alien eggs spread across the map; at least 3 are in the starting area on mountain tops & 1 in the cave, at random locations. Once you’ve shot them by using only a weapon without the Ark attachment (so that the green eggs will explode) you’ll have to find & shoot a big Extinction egg hidden behind an alien hive thingy (exact location in the video guide below) to activate the easter egg.

Upon activation, for 3 minutes long, all the enemies you kill on this map will transform into Mushrooms!

What you get: Armed with dual wielding pistols, the Death Mariachi rampages through the map, turning your kills into your own squad mates. — Watch the video to see his powers and abilities for yourself.

Have you found any Call of Duty: Ghosts Invasion easter eggs?